"Slow growth forever" is gradually being accepted by central bankers and governments everywhere. Businesses already recognize this reality as evidenced by their low capital expenditures. As an investor, you must adjust or eventually be crushed.

Portions of the following column are excerpts from the Fundamental Trends ebook - Surviving and Thriving in the Slow Growth Forever Economy - set to be released in December of 2016. 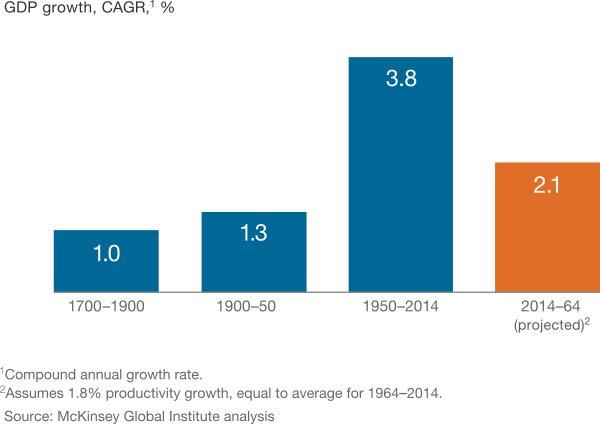 In today's "slow growth forever" world, there is no rising tide to lift all boats. Most investors, however, still look at the 1981-1999 bull market and easy money periods since as "normal" investment landscapes. Those investors will soon feel a rude awakening.

The belief that central banks can continue to prop up markets with easy money is the height of arrogance and ignorance. The complete disregard for the Taylor rule again, first by Greenspan and now by Bernanke/Yellen, has the world seeing many asset prices, particularly stocks and bonds, that can't be justified or sustained indefinitely.

While central banks certainly prevented a depression by intervening in the last financial crisis, perpetual emergency monetary measures are sapping the confidence needed to return to sustainable economic development.

Central banks have attempted to fill an economic hole with cheap money in order to get to the other side. This works when we are in a cyclical recession - as Keynes pointed out. However, the U.S. and the developed world are not in a cyclical economic weak period.

It is important to understand that we are experiencing a permanent structural change in the global economy as described by former U.S. Treasury Secretary Larry Summers early this year, and as I pointed out early last year here and here on MarketWatch. Because of that, easy money will not and cannot lead to a new period of sustainable growth similar to what we saw pre-financial crisis.

Before we throw the central banks completely under the bus, we have to acknowledge that governments have been largely dysfunctional globally, putting the central banks on the spot. The inability of governments to be honest with their citizens about what is happening is monumental cowardice and demagoguery. If that issue isn't largely resolved soon, it will not matter what central banks do in the future because we'll be doomed to a massive depression.

The core structural differences between now and the past are aging demographics and accumulated global debt, as well as, that much of the world has already gone through their fast growth development decades (i.e. China). We now know that the world economy simply cannot grow as fast as it did in the past. We know that global GDP growth will be around 2% for a long time vs. the nearly 4% we saw for six decades following WWII.

As the United States, Europe, Japan and China age in the next few decades, there will be massive challenges to provide healthcare and services to those populations. Of those nations, only the United States has a large young generation entering the workforce to mostly offset a retiring generation. Unfortunately, in an era where technology keeps replacing low-end jobs without adding much productivity overall, the Millennial generation is not nearly large enough to create the type of economic growth we would need to comfortably pay our debts and obligations.

Because of the lack of a rising tide, central banks and governments will continue to try to create economic growth. Some of it will be successful, but much of the successes will probably be offset by welfare policies that never get reformed.

Central banks are near the bottom of their toolbox with only "helicopter money" left in the event of a recession - which we will surely get soon. When central banks (or Federal Governments) do engage in helicopter money - injecting money directly into economies somehow - they will have to do it right. Providing cash for shopping ala George W. Bush will be meaningless after several months. When, not if, they use the helicopter money tool, they must do a massive one-time injection that promotes sustainable growth.

The two ways to promote sustainable growth that I can think of are funding an infrastructure bank and relieving about 3/4 of outstanding student loan debt. Funding an infrastructure bank with about $2 trillion would help do the deferred maintenance that America is woefully behind on, build the smart grid and provide jobs that last for nearly a generation. The paying down of most student loan debt by the Federal Government or central bank would help the banks stabilize their balance sheets and support lending, as well as, give millions of otherwise productive people a chance to catch up financially and support the economy with new spending.

Because "helicopter money" is literally printing money, it will also have the impact of solving the inflation dilemma that central banks are facing. We would almost immediately get about 20-30% inflation points spread over several years. That in turn would lead to a normalized interest rate policy and keep the "bond vigilantes" at bay.

The alternative to helicopter money is that we accept a major step down in standard of living. It really is that simple. However, as I have said, we must also reform our welfare practices or it will simply be a can kicked further down the road that eventually dead-ends. We will see what direction events take, but I suspect we at least get helicopter money during the next recession given that interest rates and quantitative easing have nearly reached their conclusive ends as Janus Portfolio Manager Bill Gross recently described.

The Next Financial Crisis

So, while the risk of another financial crisis is high in the next decade due to the execution risks faced by central banks, governments and business, it is not a sure thing. I have held extra cash in asset allocations the past year because the risk is high. Unfortunately, holding extra cash for added safety, is about the best you can hope for unless you are an exceptional trader. Many have chosen to chase return rather than respect risk, so, I think it is very likely that even without a financial crisis, we see the completion of the bear market that rolled through a sector at a time in 2015.

Over the next decade, with or without a financial crisis, the markets will have to adjust to "slow growth forever." That means the low volatility environment we have seen lately, will become a thing of the past. Asset prices will soon start to fluctuate more. Indexes will roll through full cycles with little-to-no gain, but shake investors out along the way - especially the aging and emotional baby boomers who will be entering year two of required minimum distributions in 2017.

Even if there is no financial earthquake, investors must get ready for tremors. These tremors will be both warning signs and opportunities to adjust our asset allocation.

We should expect at least one shallow recession and bear market before the next financial crisis. Maybe two or three of each. Government spending programs, central banks and geopolitical events can alter timelines, but probably not change that there is a demographics and debt reckoning coming eventually.

People need to focus on not thinking so linearly. While long-term economic growth and stock market returns will average lower than in the past, and there will be corrections, bear markets and potentially a massive crash eventually, there will also be times to make changes to our asset allocations that will contribute to a long-term winning approach.

As an investor, you MUST accept the "slow growth forever" economy or you will suffer large repeated drawdowns in the coming decade. As a citizen, you must consider "slow growth forever" in how you evaluate the messages that politicians are sending to you. As a person, you must manage your personal financial planning for change and disruption regardless of your age.