Retests Can Occur After Breakouts

For example, after the S&P 500 (NYSEARCA:VOO) went basically nowhere between November 1993 and February 1995, the bulls finally mustered enough conviction to push price above the orange box below. After the bullish breakout from the long-term range, sellers needed one more shakeout before the market pushed higher. The retest occurred above the green arrow. 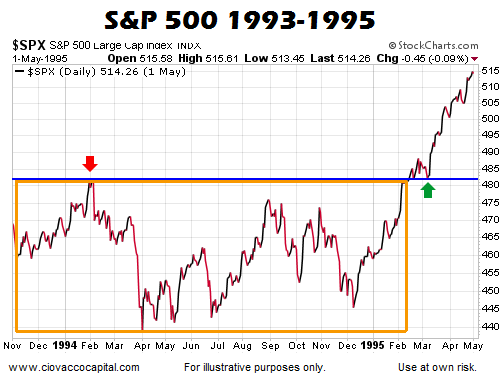 The purpose of showing the chart above is to provide a generic example of a retest. We are not making any attempt to compare 1995 to 2016. Yes, 2016 is quite different than 1995. However, that concept applies to all historical market references.

There are numerous ways to define a long-term market consolidation, including using a trend channel. The S&P 500 stayed contained within the two blue parallel lines below between October 2014 and July 2016 (see orange and green arrows below). After breaking out, the S&P 500 pushed higher and is now "retesting" the upper part of the blue trend channel. If the market moves back into the trend channel, the next layer of possible support falls within the orange box. 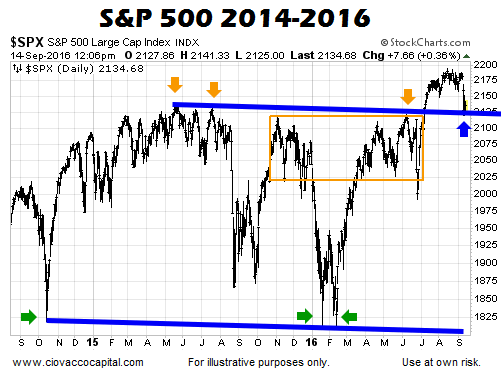 Given the rather low market expectations for a September interest rate hike, recent volatility may have a "should we be getting concerned about inflation" component. From Bloomberg:

Treasuries rallied Wednesday as traders gained confidence that the Federal Reserve will keep interest rates steady at least through next week's policy meeting. Traders are favoring shorter maturities as a Fed on hold is seen as potentially stoking inflation, which erodes the value of long-term debt. Futures signal barely a one-in-five chance that the Fed will tighten policy this month amid tepid economic growth and restrained inflation.

Weekly levels for the S&P 500 and SPY were covered on September 13. We can also learn something by examining monthly closing levels near the top of the orange consolidation box. If the market wants to drop further, something that is quite possible with inflation data and a Fed meeting on the horizon, the monthly band of possible support falls between 2,107, and 2,059. 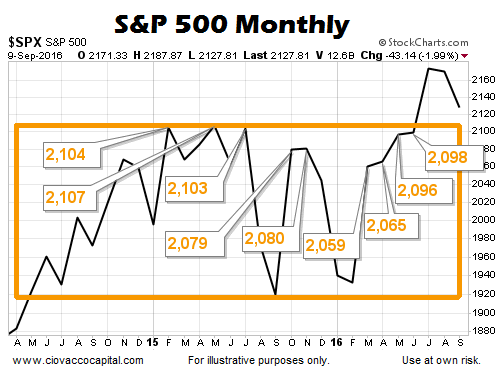 Chris Ciovacco
9.64K Followers
Chris Ciovacco is the founder and CEO of Ciovacco Capital Management (CCM), an independent money management firm serving individual investors nationwide. The thoroughly researched and backtested CCM Market Model answers these important questions: (1) How much should we allocate to risk assets?, (2) How much should we allocate to conservative assets?, (3) What are the most attractive risk assets?, and (4) What are the most attractive conservative assets? Chris is an expert in identifying the best ETFs from a wide variety of asset classes, including stocks, bonds, commodities, and precious metals. The CCM Market Model compares over 130 different ETFs to identify the most attractive risk-reward opportunities. Chris graduated summa cum laude from The Georgia Institute of Technology with a co-operative degree in Industrial and Systems Engineering. Prior to founding Ciovacco Capital Management in 1999, Mr. Ciovacco worked as a Financial Advisor for Morgan Stanley in Atlanta for five years earning a strong reputation for his independent research and high integrity. While at Georgia Tech, he gained valuable experience working as a co-op for IBM (1985-1990). During his time with Morgan Stanley, Chris received extensive training which included extended stays in NYC at the World Trade Center. His areas of expertise include technical analysis and market model development. CCM’s popular weekly technical analysis videos on YouTube have been viewed over 700,000 times. Chris’ years of experience and research led to the creation of the thoroughly backtested CCM Market Model, which serves as the foundation for the management of separate accounts for individuals and businesses. Copy and paste links into your browser: Market Model: http://www.ciovaccocapital.com/sys-tmpl/ccmmarketmodel/ More About CCM: http://www.ciovaccocapital.com/sys-tmpl/aboutus/ YouTube: http://www.youtube.com/user/CiovaccoCapital Twitter: https://twitter.com/CiovaccoCapital CCM Home Page: http://www.ciovaccocapital.com/sys-tmpl/hometwo/
Follow