If 2016 has taught us anything it's the importance of political risk. From Brexit to the South China Sea, North Korea, Turkey, refugees, referendums, and elections, this year seems to have brought an unusual amount of political risk. And it's not over, the impending US election has the potential to extend an existing trend of rising policy uncertainty in the US. There is an observable historical link between rising policy uncertainty and rising risk for equity markets, as this article will detail.

Why does it matter?

On to the important part; it's one thing to say political risk is rising and this is bad for markets, but it's another thing to look at the data and determine the historical relationships.

The first implication, and perhaps the most obvious, is that volatility is generally higher when policy uncertainty is higher. 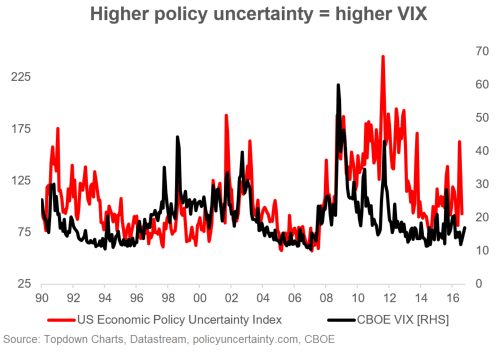 The second implication, which is a logical follow on point, is that the equity risk premium is generally higher when policy uncertainty is higher. 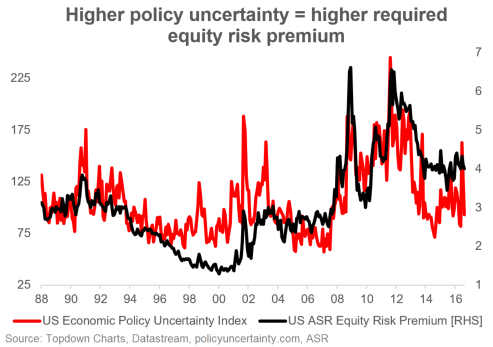 This makes sense; given higher uncertainty investors will require a higher risk premium to compensate them for the higher perceived amount of risk that they will be taking on.

But is it really bad news?

You might think that higher uncertainty is a bad thing, and well yes bad things usually happen to markets at the same time that economic policy uncertainty is higher. But that's the point, it is a coincident indicator (very much like the VIX), rather than a leading indicator of political risk.

Think of it this way, does lower economic policy uncertainty mean lower risk? Looking at the chart below, if we focus on the periods where policy uncertainty was the lowest it certainly cleared the way for market performance e.g. during the late 90's, the mid 2000's credit boom, and towards the later part of the QE bull market. But what you probably also notice is that the policy uncertainty index tended to hit the low points around the top of the market. 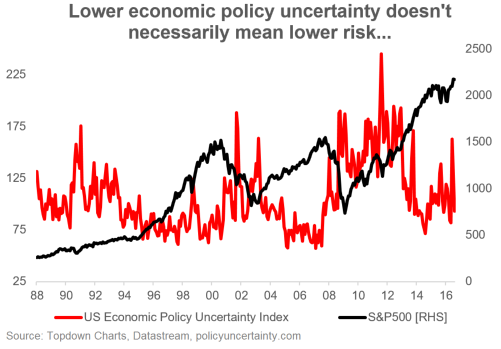