I've created a simulation of past and future oil production in the Bakken in the form of a virtual oil field. 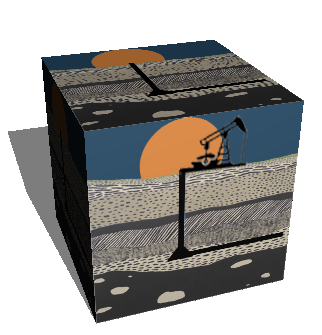 In this simulation, I created a number of virtual oil wells for each week, over time, based on Baker Hughes Rig Count data.

Note that drilling rig activity above, for the purpose of modeling, is assumed to remain constant in future months. This is a simple case that allows for the presumption that if future drilling activity increases then future production would increase above the modeled result, and visa versa. 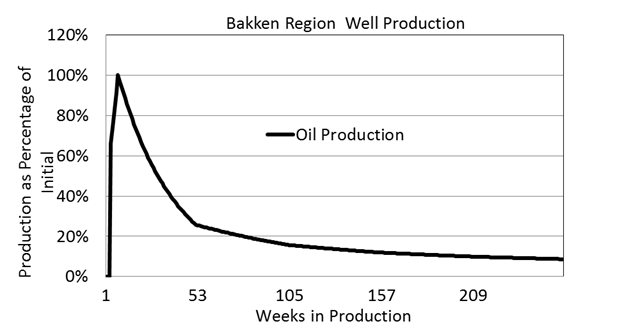 My suspicion is that Drilling Rig Productivity at Bakken is nearing the end of an innovation S-Curve and will now begin to flatten out, at least temporarily. Therefore, future oil well productivity factors are assumed to taper off somewhat as shown above.

After a well is drilled, it must be worked to completion. Newly drilled wells are added to the inventory of drilled but uncompleted wells (DUCs). Starting this month, the inventory of Bakken DUCs is included in the EIA monthly DPR DUC Supplement (many thanks to the EIA for this). The DUC Supplement is helpful for gaining insight into production and productivity trends at the seven major shale basins.

Based on the DPR DUC Supplement, the number of drilled wells at Bakken is fairly consistent with the number of completed wells. This data suggests that future EIA Drilling Rig Productivity is more likely to be affected by innovation and efficiency rather than by changing DUC inventories.

Considering that drilling rig activity has dropped substantially compared to two years ago, it would be reasonable to guess that production will continue trending downward for some time. Computer modeling, however, suggests otherwise.

Joseph Wells
82 Followers
Professional Engineer, programmer and commodity investor who enjoys hearing from both ignorant and informed investors. Unfortunately, SA censors both so its value is limited.
Follow