I discussed in a Seeking Alpha article yesterday entitled "3-D Printer Companies Need To Make Critical Adjustments - And Soon" that, among other things, printer companies need to reduce costs of consumables. I also mentioned that 3D Systems (DDD) CEO Vyomesh Josh commented at a recent conference that 3D Systems is a "Materials Company."

I haven't heard any similar remarks from Stratasys (NASDAQ:SSYS) CEO Ilan Levin, but looking at the company's financials, it may indeed be the case. That is the problem from two standpoints: (1) price of materials is driving away printer customers and (2) third-party consumable merchants are selling material at lower prices.

Stratasys is commonly known as a 3D printer company, not a materials company. While Stratasys' printer shipments increased 56.6% between 2013 and 2014 when the company acquired MakerBot, shipments dropped 46.9% in 2015 as shown in Table 1 Consumable revenues increased 32.5% in 2014 and 5.1% in 2015 driven by the addition of advanced material offerings and a growing installed base of systems.

If we look at printers on a QoQ basis, shipments have dropped significantly from early 2014 as shown in Table 2 below. The graph below is a better illustration in the drop in shipments from Q1 2014 through Q2 2016. 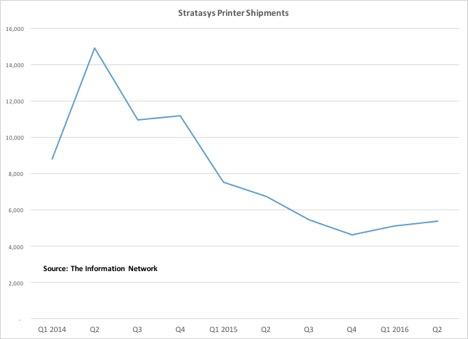 Stratasys reports in its Q2 financials that it has a huge selection of consumable materials for sale:

Of the eight acquisitions made by SSYS, only one, Interfacial Solutions, is a materials company. Nevertheless, as shown in Table 3 below, consumable revenues increased 32.5% in 2014 and 5.1% in 2015 driven by the addition of advanced material offerings and a growing installed base of systems.

If we look at YoY changes in quarterly revenues for consumables in Table 4, they have been up in double digits for two of the four listed quarters.

Clearly, printer shipments have plummeted while consumable revenues have shown solid growth. However, competition from third-party material suppliers will grow and put pressure on revenues.

One such company, Argyle Materials makes an important statement on its website, which supports my above first thesis that the price of materials is driving away printer customers

"Most people think about the Hardware cost when buying a new 3D printer. What most people do not realize is that over a 5 year period the Hardware cost of the printer will only represent approximately 10%-35% of the Total Cost of running the Printer over that period. Materials will account for ~70% - 90% of your Total Costs of running your Printer."

Supporting my second thesis that third-party consumable merchants are selling material at lower prices, as illustrated in Table 5 below from Argyle Materials.

In another example of the third-party materials companies addressing the 3D printer market, Japan-based JSR recently invested in start-up Carbon.

Stratasys generates revenue from two divisions, Products and Services. Total Net sales in 2015 were $696.0 million as compared to net sales of $750.1 million in 2014, representing a decrease of 7.2%, as shown in Table 6 below. Stratasys includes printer and materials revenues in its Products division. The company doesn't break out its revenues for printers or consumables.

Because of the growth in consumables shown in Tables 3 and 4 and the drop in printer shipments in Tables 1 and 2, SSYS has become more of a consumable company. But that could change as an increase in third party consumable suppliers. While Table 6 shows that the Products division dropped in 2015, it continued to drop for the six months ended 2016, as shown in Table 7.

What is more interesting is Stratasys' Services division, which makes prototypes for customers. Chief competitors are DDD and Materialize (MTLS). For 2016, SSYS generated 29% of revenues from services compared to 40% for DDD and 35% for MTLS.

The entry of GE (GE) into the services sector through its earlier September acquisition of Arcam and SLS Solutions presents competition to SYS, but more so for DDD because of GE's emphasis on metal-based parts. So far in 2016, GE's services sector generated 46% of total company revenues.

The revenue and printer shipment data for SSYS shown in the tables above suggest that the company needs to refocus its business model by moving away from the high cost of developing and selling high-priced materials by establishing an open architecture, thereby making its printers more attractive. Secondly, the company needs to strengthen its services business, increasing from its 29% to the 35-40% range of competitors. One way of doing so is moving to metal 3D printing from additional acquisitions. 3D printing of metal products is achieving significantly stronger growth than plastic.