A couple of interesting trends and patterns emerge from the analysis. The key takeaway is that the pattern of sentiment that we have just seen is typical of two types of markets: the start of a bull market and the final upward phase of a mature bull market. I will leave it an open question for readers as to which of the two it is...

On a quick methodology note the sentiment indicators used in this article combine the popular AAII (retail sentiment) and Investors Intelligence (advisory sentiment) surveys with data extracted from Thomson Reuters Datastream. A z-score is taken of each survey and a 12 month, 1 month smoothing process is used. In simple terms it's a long-term smoothed gauge of sentiment.

Most neutral market... ever

The first observation is the rise in neutral sentiment following the financial crisis. This reflects what I believe is a profound sense of skepticism by investors that got burnt in the dual bear markets of the 2000's. It also likely reflects an element of investors "just going with it" (it being QE) despite concerns e.g. about valuation, stagnant growth, etc. Either way it is extraordinary, but there are echoes of history in it. 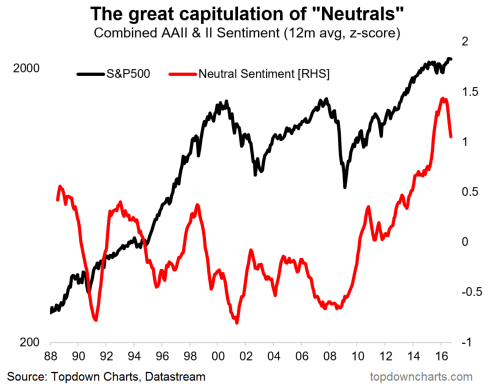 Importantly, neutral sentiment has started to roll over. There is a couple of instances where neutral sentiment underwent a "great capitulation" i.e. in the early-90's before the first phase of the bull market, in the mid-90's before the first part of the dot com boom and in the late-90's during the final, manic, part of the dot com boom. While less dramatically so, it also occurred during the final phase and the start of the sub-prime boom.

If you found the previous chart interesting, you will find this one fascinating. Turns out that the correction/mini-bear-market of H2 2015 + Q1 2016 drove the biggest collapse in bullish sentiment since the global financial crisis. Reflect on that for a moment... 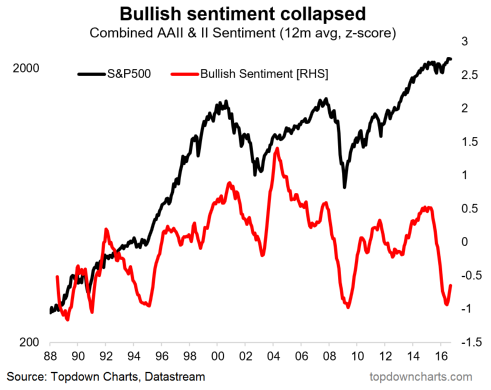 Thinking again about patterns, whenever bullish sentiment fell significantly and then turned up in the past (e.g. as it is doing now) it marked the start of a bull market. Examples: 2009 bottom, 2003 bottom, 1994 at the start of the dot com boom, and harder to see; the 1988 and 1990 market bottoms.

After going through the most neutral market on record a couple of patterns in longer term sentiment indicators have emerged. In the case of bullish sentiment these patterns historically occurred during the forming of a bottom and the start of major bull markets. In the case of neutral sentiment these patterns also occurred at the start of bull markets, but perhaps a more likely parallel; often marked the final upward phase of major bull markets. Either way the signals generated are bullish.

Bottom line: The patterns of longer term measures of sentiment suggest that we are either at the start of a new bull market or the final upward phase of the prior bull market.