Drug company Valeant Pharmaceuticals International, Inc. (VRX) was the most exciting story in the stock market of 2015/6 if you ask me. Unfortunately, shareholders of Valeant Pharmaceuticals that bought into the acquisition model a year ago are now sitting on devastating losses. I can only say congrats to all those investors that jumped off the sinking ship in time last year, and those investors that actually shorted the drug company.

The drug company reaffirmed its revenue guidance as part of its 2nd quarter earnings release, and guided for significant debt reductions on the back of asset sales and free cash flow. Further, Valeant Pharmaceuticals' new Chief Executive Officer Joe Papa put $8 billion of non core asset sales on the table in order to pay down the drug company's debt. 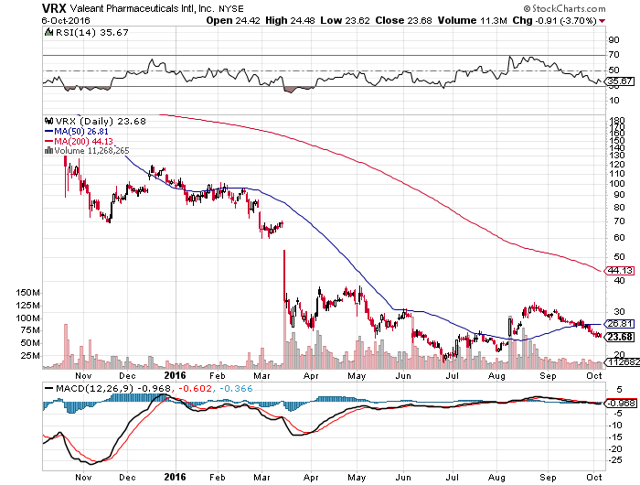 The consolidation, however, did not come as a big surprise to me, because 1. Valeant Pharmaceuticals' shares were overbought after the Q2-16 earnings release; and 2. Investor optimism was shifting too dramatically, so profit taking needed to be expected.

The 2nd reason was also the reason why I penned another article on the troubled drug company at the end of September, "Valeant Pharmaceuticals: How Much Downside?", in which I contended that shareholders in the drug company were facing some more downside on the back of stock downgrades. In particular, I suggested that Valeant's shares could fall back to $25, which seemed unlikely at the time.

Valeant Pharmaceuticals, as far as I am concerned, is unlikely to go out business because of past pricing scandals and specialty pharma controversy. The company pulls in enough money in free cash flow, and should be able to raise more than enough cash from asset sales in order to reduce debt to a more manageable level. If worse comes to worst, Valeant Pharmaceuticals could even sell off core assets such as Bausch & Lomb, and use the cash to repay acquisition-driven debt. In any case, I judge the probability of a Valeant bankruptcy to be very low.

Valeant Pharmaceuticals' looks appealing at ~$23, largely because investors greatly exaggerate the drug company's bankruptcy risk. I think it is highly unlikely for Valeant Pharmaceuticals to go out of business given that it has a filled drug pipeline, pulls in a decent amount of cash flow on a recurring basis, and moves forward with asset sales. Granted, Valeant Pharmaceuticals has surrendered most of its latest gains, and is far from being an investor favorite, but that doesn't mean investors can't make a bunch of money in this name. Buy for capital appreciation.

Achilles Research
34.77K Followers
I am a dividend investor and look for undervalued investments in the stock market. I identify misunderstood and undervalued equity investments and hold those securities until their price approximates my estimate of intrinsic value. I am a long-term investor only. I am building a $100,000 high-yield income portfolio. I am running this portfolio as an experiment to see if long-term sustainable income can be generated from a diversified pool of high-risk, high-yield securities. I am willing to accept high risk in order to meet my performance goals.