So is anyone biting? SandRidge Energy (NYSE:SD) filed bankruptcy earlier in the year and wiped out the equity shareholders (Adobe download 10-Q and current filings). That left a bad taste in the mouth of many investors. The unsecured debt was not in much better shape. As usual, the secured debtholders got the most equity, some mandatory convertible debt and some warrants. 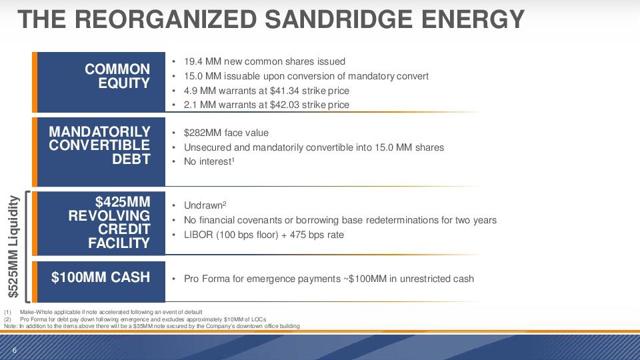 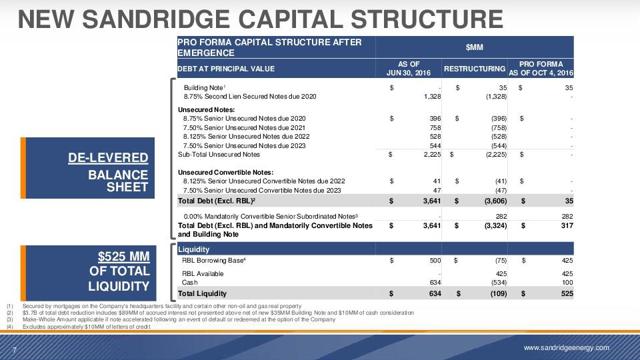 Breakeven is going to drop a lot because of the sharply lower interest expense. The $282 million of notes shown above are interest free. But they will significantly dilute equity upon conversion. So for investment purposes, investors should assume the notes are converted. With financing costs finally down to a reasonable amount, the onus of success will rest squarely on operations.

Liquidity is more than adequate with an initial $100 million cash balance and a rather generous credit line. The interest rate is not that bad either as it has a little more than a 4% increase over the base rate. Still this company would be well advised to avoid the leverage route permanently. There is absolutely no reason to repeat the mistakes that caused the chapter eleven filing. 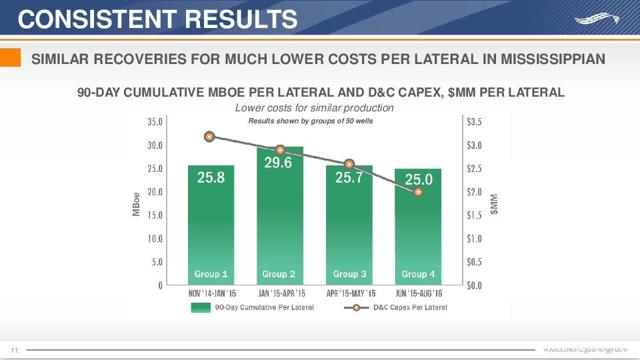 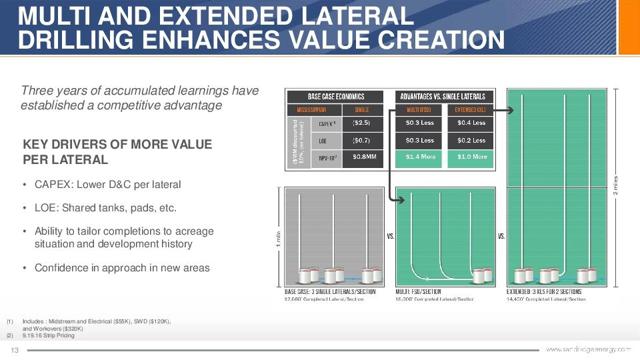 The costs of drilling have dropped sharply even though the company was reorganizing in bankruptcy. It will be very interesting to see the new payback periods and IRR's from all of these new costs. Breakeven was quite high before the bankruptcy filing. Now the reorganization appears to have reduced operating breakeven costs sharply. The company will probably need to operate for few quarters outside of bankruptcy in order to demonstrate that lower breakeven. The breakeven on new wells appears to have dropped sharply. As before the company will focus on Northern Oklahoma to minimize the earthquake threat and has participated in a number of programs to become part of the solution to the earthquake problem. That includes some new water disposal system ideas.

However, so far, the SandRidge disposal system has not been shown to be part of the earthquake problem. Even so, the company has been ordered to shut down a disposal well or two. But so far the disruption to production has been minimal. 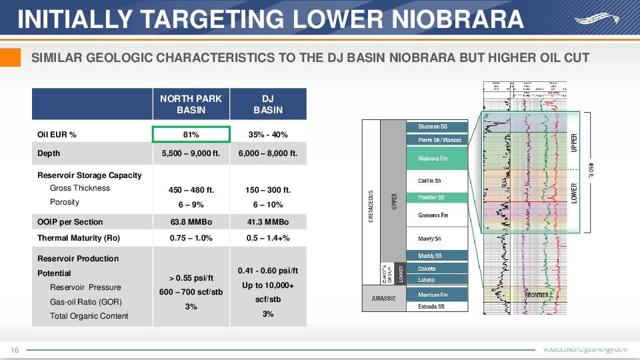 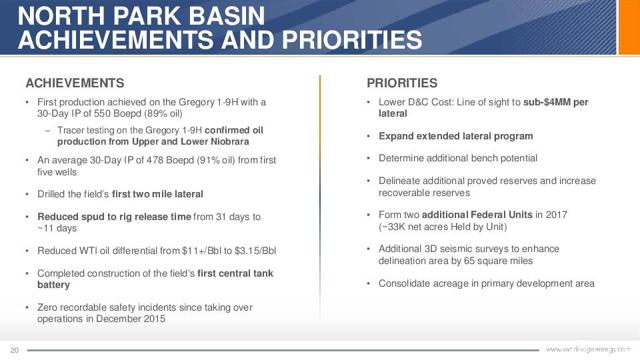 Before the company filed bankruptcy, investors wondered if the North Park purchase was wise. Right now the results are mixed. Probably the IRR is not that great, but it is declining quickly. Plus the acreage offers some stacked pays which means cheap re-completions offering additional reserves after one zone is exhausted.

Trucking the oil is expensive, so the company is evaluating a potential pipeline. Still it looks like the lease operating expense can be significantly decreased even without a pipeline.

Currently, the gas is burned as produced, but management is looking to re-inject the produced gas. This may help maintain reservoir pressure and decrease the decline rate if conditions are right. Still it looks as though these properties in Colorado will provide some valuable diversification with the potential for increasing profitability in the future. Dependence on the Oklahoma and Kansas holdings is too risky until the earthquake problems are resolved satisfactorily. 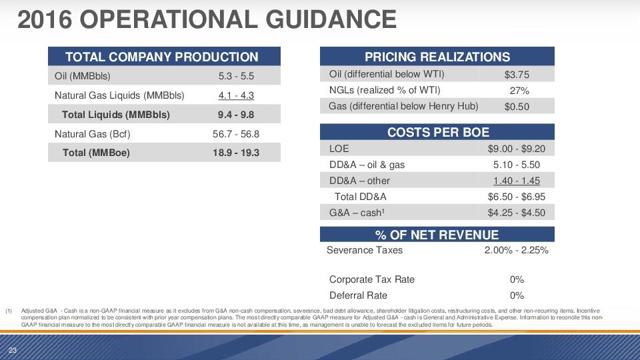 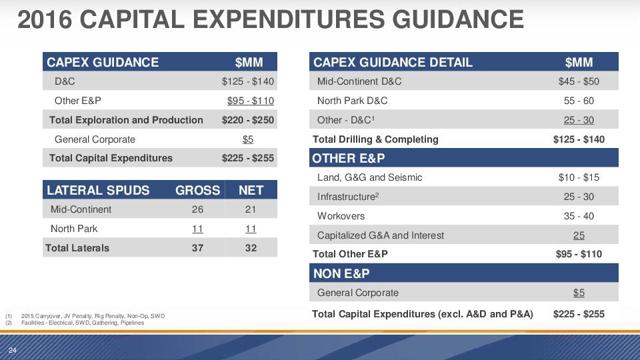 The guidance for the lease operating expense is sky high for a gas operator. The latest 10-Q showed the company below that amount for the second quarter. But management also had admitted that reworks had been delayed, probably as a result of the bankruptcy. That is going to change with the company's emergence from bankruptcy. If the finding and development costs are anywhere near the latest depreciation costs, then the overall breakeven of the company is far lower than it was before. This is another figure that will need to be established after the bankruptcy by a few months or years of operations.

But the properties have been written down considerably. This will make it far easier for management to shut down and properly abandon unprofitable wells on a timely basis. The industry has changed a lot of practices and the new SandRidge Energy will not be nearly as cash constrained as its predecessor. So expect the reworks to significantly decrease the lease operating expense going forward. This gives the company the potential to have a very different cost structure within the next year.

The capital budget has already been reduced in response to lower production and lower industry costs than was originally forecasted in bankruptcy. It will take time for the costs associated with the newer wells to predominate. But many of the past problems on the balance sheet will now be gone. The company does need to keep up with the competition. Management has shown that it can drill in areas with a higher percentage of oil production. Raising the oil production percentage will greatly affect future profitability. Especially if management can hold the line on costs. 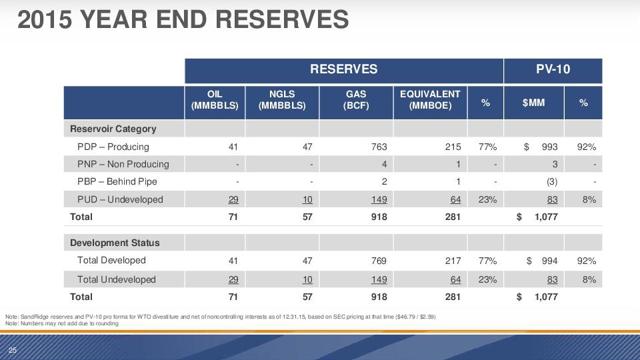 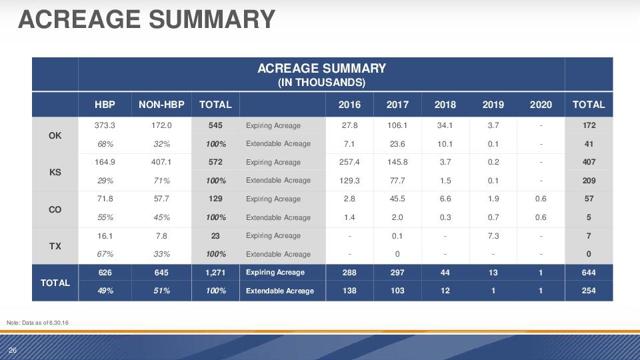 The market generally takes a jaundiced view of companies that emerge from bankruptcy. The company has reported numerous sizeable losses from operations before filing bankruptcy. In fact this company and profits are basically strangers. So an initial valuation discount is warranted by the market's concerns about this company's future.

So management will need to demonstrate that it can operate profitably and in a financially disciplined fashion. For speculators, the balance sheet is in far better shape. Operations is making good cost cutting progress. But the potential cash flow is a question mark at the current time. The latest cash flow figures are negative, but contain a lot of non-recurring items having to do with the bankruptcy filing.

Generally, the company must demonstrate before it leaves bankruptcy that it is competitive, so there is a plan to restore a reasonable amount of cash flow promptly. Conservative investors may want to wait for the proven cash flow track record. But speculators may go with the reserve valuation and assume that management will solve the cash flow challenge.

The reserves shown in the second slide are substantial, and the company value is at a discount to those reserves. Part of this is the market waiting for the company to establish a profitable track record. Part of this is the market's wariness of the Oklahoma earthquake problems. At some point Oklahoma will satisfactorily resolve the earthquake problems, but this company is very near the primary earthquake areas, and occasionally suffers significant earthquakes on its leases.

The stock is brand new as the shares of old stock (both common and preferred) became worthless. So in many ways the common is similar to new common stock after a company goes public and needs some seasoning over time in the marketplace. Lower oil and gas prices will not be as damaging to the company as they were in the past because the company has a far lower debt structure. There is a hedging program to even out cash flows from commodity price fluctuations. So as an investment in a company that just emerged from bankruptcy, investors could do far worse.

Disclaimer: I am not an investment advisor and this is not a recommendation to buy or sell a security. Investors are recommended to read all of the company's filings and press releases as well as do their own research to determine if the company fits their own investment objectives and risk portfolios.

If you liked this article, go to the top of the article and click on the follow button next to the author name to receive notices of new articles when they are released by me.

Long Player
15.84K Followers
Author of Oil & Gas Value Research
Get analysis on under followed Oil & Gas companies with an edge.
I am a high school teacher for a decade. Before that I was an analyst (operations and financial) and for a short time a Controller I have a B.S. with an emphasis in Accounting and an MBA (for which I studied Finance, Economics, and Management) I passed the CPA exam on the first try and am a retired CPA in the state of Maryland. I have a high school teaching credential and an MA in Math Education