Jeff Rosenberg looks at the quickly approaching money market reform as an opportunity for investors to potentially pick up some yield.

The impact of impending regulatory reform in the multitrillion-dollar money market industry appears to be accelerating in short-term bond markets. The October 14th regulatory implementation date is leading to substantial outflows from prime, and perhaps unintentionally, tax-exempt money market funds, but the new rules also provide one of the few clear opportunities for investors.

In a nutshell, the new rules require a floating net asset value for institutional prime and tax-exempt money market funds, as opposed to the current tradition of setting the share price at $1. The rules were adopted in part to help reduce the risk of runs on money market funds, such as that experienced by the Reserve Primary Fund, which "broke the buck" in 2008 in the midst of the financial crisis. Though long in the making and well understood by financial markets, the impending implementation of these money market reform measures hold significance not only directly for investors in money funds, but due to the importance of the financing provided by these funds, across the financial market landscape.

As money fund reform approaches, uncertainty over how much in assets will leave prime money funds forces managers to dramatically shorten the maturity of their assets - effectively dropping the supply of short-term financing. The outflows from prime money funds accelerated significantly in August and September, with outflows of $405 billion, bringing the total year-to-date exodus from prime to $699 billion, for a decline of around 54% so far for the year [source: ICI].

The effect has been a notable rise in the shortest maturity interest rates - even as rates in other parts of the world are heading lower, or even further negative. The acceleration in outflows as well made its way into tax-exempt money funds. While the focus of money fund reform was on institutional prime money funds, the reforms impacted the tax-exempt space by imposing redemption fees and gates. One unintended consequence removed the ability of these funds to provide "sweep" functionality and that impact exacerbated the shift out of tax-exempt money funds, especially in August and September. See the chart below. 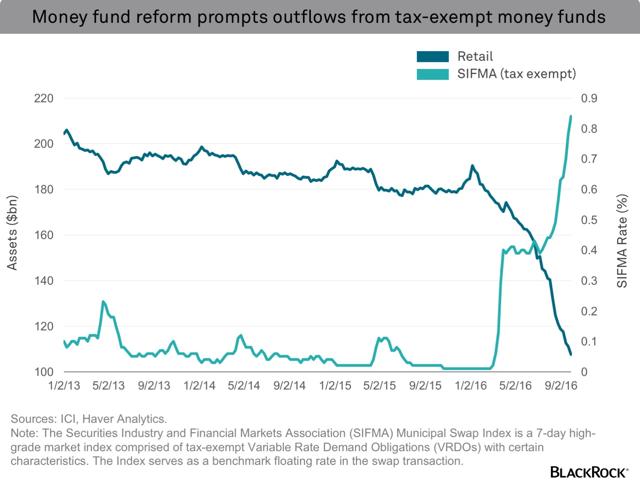 The acceleration of outflows from tax-exempt money funds hit short-term muni financing rates in recent months. The SIFMA Municipal Swap Index rate (an index of 7-day average maturity) spiked significantly from 44 basis points to 87 basis points as of October 5. The increases on the very short end of the curve led shorter maturity muni rates to underperform, and remarkably, the very front end of the curve in municipals inverted, with one-year maturity muni averages lower than the SIFMA Index.

The impact of money fund reform represents a unique and clearly regulatory-induced outcome. We see these increases in short-term rates at odds with the "lower for longer" and even negative rate bond world. As reform implementation passes, so too should the uncertainties associated with it, bringing supply back into the very front end of the curve.

Heading into October, the widening in shortened municipals (and LIBOR rates as well) represents a tactical opportunity for fixed income investors to pick up some yield - albeit over a short investment horizon - for their cash that otherwise might get nothing, or worse.

Jeffrey Rosenberg
294 Followers
Jeffrey Rosenberg, CFA, Managing Director, is BlackRock's Chief Fixed Income Strategist and a member of the BlackRock Investment Institute. His responsibilities include working closely with the Global Chief Investment Officer of Fixed Income and the global fixed income portfolio teams to develop BlackRock's strategic and tactical views on sector allocation within fixed income, currencies and commodities. Mr. Rosenberg is also the portfolio manager for the fixed income tactical allocation managed model portfolio, an actively managed portfolio of exchange traded funds. Prior to joining BlackRock, Mr. Rosenberg spent nearly 10 years at Bank of America Merrill Lynch as the Chief Credit Strategist. His most recent role included coordination of strategy across all fixed income, securitized assets, credit, FX and commodities. Mr. Rosenberg brought innovation to his credit strategy work producing the first commercialized quantitative corporate credit portfolio risk analytics system from a dealer firm. At BAML, Mr. Rosenberg and his team were consistently top ranked by Institutional Investor for high grade, high yield, and general fixed income strategy. At BlackRock, Mr. Rosenberg publishes his monthly "Fixed Income Strategy" along with regular posts to the BlackRock Blog, contributions to BlackRock Investment Institute publications and numerous media appearances. Mr. Rosenberg earned a Masters in Science degree in Computational Finance from Carnegie Mellon, a BA degree in Mathematics from the University of Minnesota, and a BA degree in Finance from the University of Wisconsin. He has been a Chartered Financial Analyst since 1997.