As everyone knows by now, Donald Trump will be the 45th president of the United States, and what supposedly would rocket gold beyond $1400 has actually resulted in gold DROPPING after the election. With gold experts and analysts scratching their heads, we will offer our opinion on what is going on with gold and how gold investors should position themselves moving forward.

What is Going on With Gold?

On election night, investors could have ignored CNN and simply watched the gold price to see who was winning the election. In fact, we saw one of the craziest 12 hours in gold in history as it jumped to rise more than $60 in a few hours to rise above $1340, and then it started to fall below its election day start. 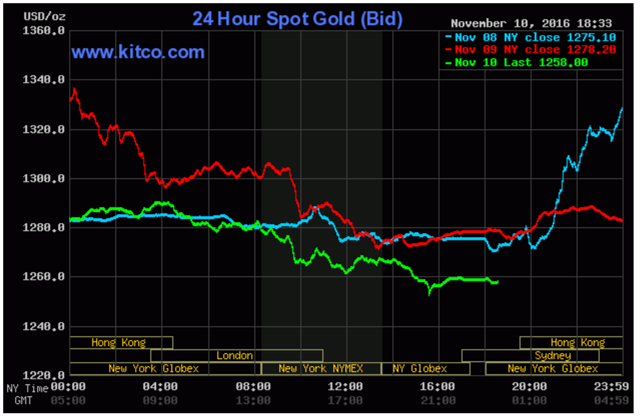 That's a pretty volatile move and depressing for gold investors that expected Trump would lead to $1400 gold.

What happened here is that investors (or more appropriately "traders") were originally shocked at the impending Trump victory and bought gold, sold stocks, and sold the US Dollar in their emotional reaction to the election results.

In fact, if we compare the gold price with the US Dollar we find an almost tick-to-tick move. 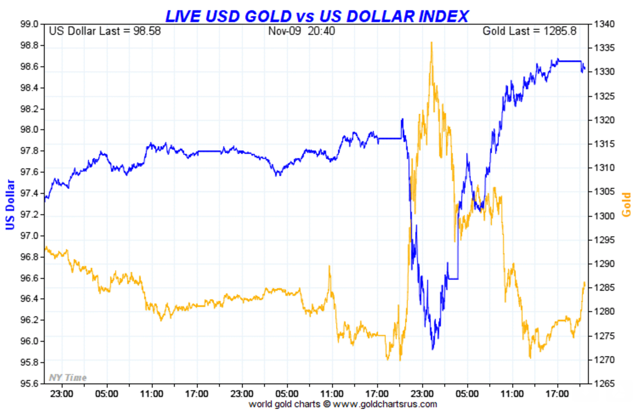 As the night went on many investors include Jim Rickards and Stanley Druckenmiller, who publicly announced he sold all of his gold the night of the elections, took the opportunity to book profits. Other investors like Carl Icahn bought large amounts of stocks during the overnight bloodbath, figuring the initial overreaction was a good opportunity to buy - and they were right as stocks rose the very next morning.

The reason for the opposite moves to what was originally predicted in stocks, gold, and the US Dollar, was that much of the initial reaction was completely emotional due to the surprise uncertainty. But then when investors took a step back they realized that Trump's plan to spend massive amounts on infrastructure was good for stocks and commodities. Additionally, the Republican sweep of both sides of Congress meant that there was a good chance all of these policies would be implemented - after all this is the first time in quite a while that the White House and Congress were held by one party.

That Explains Why Stocks and the US Dollar Rose, But Why Did Gold Drop?

The answer is best summed up by Stanley Druckenmiller on an interview aired via CNBC, where he stated that "I sold all my gold on the night of the election… because I'm very optimistic" and he's betting on growth inspired by Trump's massive infrastructure plan and deregulation push. In a growth environment, it is better to own risk-on assets and stocks rather than gold - and we agree after all rising revenues mean increasing asset values while with gold you'll only end up owning exactly the chunk of gold that you bought.

This is actually evidenced in history. In Roy Jastram's excellent book The Golden Constant, he analyzes hundreds of years of the gold price versus commodity pricing (remember for most of economic history gold was money and thus had no "price" other than commodity ratios) and found that gold did well during economic recessions and depressions, while it underperformed commodities during economic booms. Essentially, you wanted to own gold (i.e. cash) during rough times and commodities during booms - pretty logical.

If That is the Case Then Is it Time to Sell Gold for Commodities and Stocks?

Based on just those facts it would make sense to sell gold - but there is one issue that makes Jastram's analysis not quite accurate for today's world and it's a big hole in Mr. Druckenmiller's argument in selling his own gold and buying stocks… The Bond Market.

Unlike the centuries of data that Mr. Jastram studied, our bond market is an artifice in central bank suppression of the natural interest rate. It is the only world where European 10-year bonds can offer negative yields and Japan can raise money over 30 years at 0.5%. We pointed out a few weeks ago that this is starting to change, and after Trump's election, bonds have been going vertical - look at the chart for US 30-year treasuries. 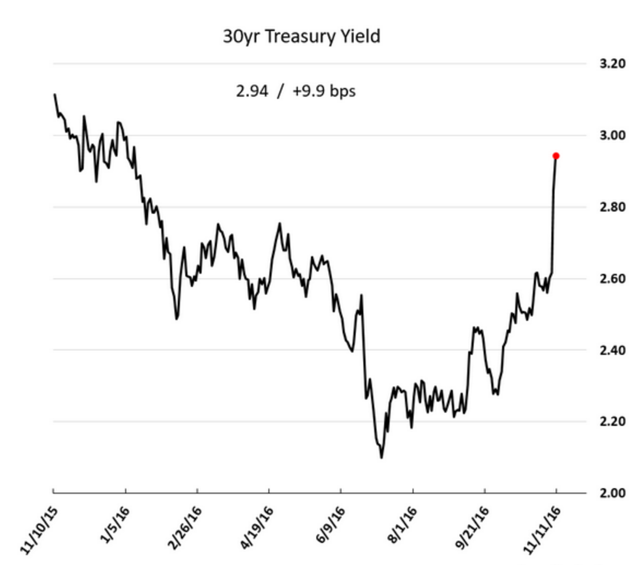 That is a scary thing for investors holding multi-billion-dollar treasury portfolios (think central banks and large mutual funds), and those are big paper losses that will be realized when bonds are sold - and will only increase as yields rise. In one week, bond investors have already seen $1 trillion in losses - we highly doubt those investors will be buying more treasuries in a rising-yield, inflationary environment.

Which brings us back to Mr. Druckenmiller's economically optimistic view of markets based on the massive infrastructure plan Mr. Trump proposes to implement - how are bond markets going to react and fund that plan?

While details are still very few and far between on Mr. Trump's spending plans, what we do know is that he plans on significantly increasing the budget deficit through spending and tax cuts. Even when CNBC's Joe Kernen questioned Mr. Druckenmiller in the interview cited earlier about how the plan will be beneficial for stocks when it is projected to blow out deficits by so much that many Republicans are hesitant to back them. After a long-winded discussion of Reagen, the only response was that "I don't worry about the other stuff…" Not very comforting.

That is exactly what we think is happening in stock markets which are trading to the upside on expecting big infrastructure spending and lower taxes and following Mr. Druckenmiller's "I don't worry about the other stuff" attitude.

This line of thinking has worked for the first few days after the election based on the initial emotional charge of the election results, but we don't see how a collapsing bond market with rising yields will be good for stocks and the US Dollar…

We Do See Why It Would Be Good for Gold

Summing it all up we see a number of reasons why this environment is very negative for markets:

All of these things start with central banks losing control of bond yields and those yields starting to rise to more natural levels - and that's what we think is happening.

To strengthen our argument further we remind investors about this chart from the McKinsey Global institute showing where bond markets stand in terms of debt outstanding. 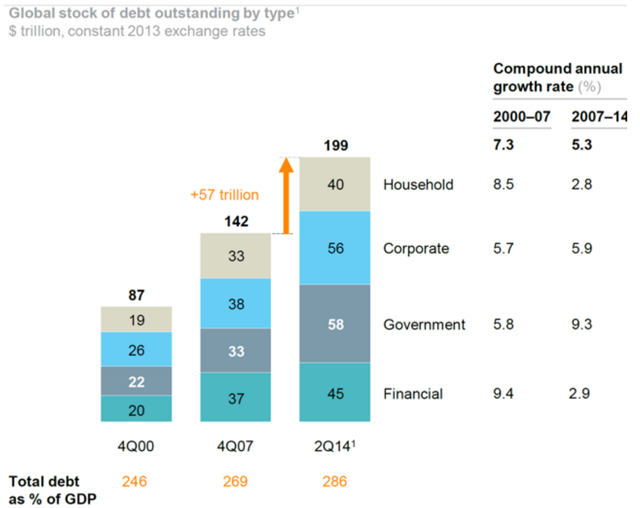 While the chart is dated and we know of no more current chart from the institute, its plain to see that global debt levels have been growing very fast - probably due to the extremely low interest rate environment we have been in since 2007. What happens when yields rise on more than $200 trillion worth of global debt?

It all comes down to an investors' view on whether or not increasing US budgets will be feasible in the currently over-leveraged and overly-indebted that we live in today. If you believe that bond markets will accept trillions of dollars of additional debt and higher inflation without spiking, then you want to be a buyer of stocks and commodities.

But if you are of the view that the next crisis in going to be in the bond markets, then there will be probably be significant road-blocks to any major government spending program and that will provide headwinds for US stocks and the US Dollar. As an alternative reserve currency without the ability of governments to dilute it via massive spending, gold provides investors with an excellent hedge in this environment - and that is the environment we believe we are heading for.

Thus, we think this is an excellent opportunity for investors that heeded our advice and lightened up positions prior to the elections to beat the mainstream investment herd by accumulating physical gold and the gold ETFs (SPDR Gold Shares (NYSEARCA:GLD), PHYS, and CEF). In fact, we have begun accumulating precious metals miners again after being uninterested for many months, as the valuations have come down significantly from a few months ago and there is now value in owning them again.

It is time for investors to a step ahead of the crowd and understand that if massive government spending is undertaken we will see even more chaos in bond markets - and that is very gold positive.

Hebba Investments
7.35K Followers
I'm an asset manager at Hebba Alternative Investments with a focus on real assets. In my articles I like to focus on events that affect the macro environment for assets (especially gold and silver), and also introduce readers to different metrics that I believe are under-utilized when assessing investments. On a more personal note, I'm a firm believer that there can be honesty, morality, and integrity in finance (though its rare) and i'd like to believe that I stick to those principles. Thus I never "pump and dump" stocks, I always list the securities we own, and I take it very seriously when I recommend a company - I do not want to see any investors/readers lose money because of my recommendations. I'm not always right with recommendations, but investors and readers can know that I always tell the truth (there is no deception) and I eat my own cooking as recommendations are either always owned OR the reason I dont own them is given (usually related to restrictions on stocks I can buy). Advising people in financial matters is a serious issue and integrity is much more important than money to me, but I do believe both can co-exist. You live with money, but after your death you only have your morality and integrity and thus i've made my choice between the two. A bit philosophical for a bio, but I dont think there's a better way to give investors my background than that. We offer investors a free weekly email list detailing gold, silver, and general economic markets which you can sign up for at: http://www.communitysynergy.com/subscribe/hebbainvestments_subscribe.html
Follow

Disclosure: I am/we are long SGOL, SIVR. I wrote this article myself, and it expresses my own opinions. I am not receiving compensation for it (other than from Seeking Alpha). I have no business relationship with any company whose stock is mentioned in this article.