"Be at war with your vices, at peace with your neighbors, and let every new year find you a better man." - Benjamin Franklin

It has been awhile since I gave an update on Eagle Pharmaceuticals (NASDAQ:EGRX). I have owned this stock since December 2014 when it was under $14.00 a share. I was so impressed with its prospects, I named it my "Best Idea" on Real Money Pro. Sometimes, timing is everything in life and the stock exploded upward starting in February of 2015 after a signing a huge collaboration deal with generic drug heavyweight Teva Pharmaceuticals (TEVA).

I have long been riding the "House's Money" after long culling half my stake for large gains using the "Jensen Rules". However, I still keep an eye on this rocket and have gotten several questions on it lately. I thought I would provide a quick update on this name as it seems overdue given some recent positive news on the name.

Based in Woodcliff Lake, NJ, Eagle Pharmaceuticals is a specialty pharmaceutical company focused on developing and commercializing injectable products utilizing the FDA's 505(b)(2) regulatory pathway. In other words, it is a drug delivery company that improves on existing products in the marketplace that are about to come off patent protection. Because the treatments in question have already been approved, the approval process for the "improved" drug is much less expensive with much a faster route to approval, compared with a traditional development path (such as 505(b)(1)). Eagle's business model is to develop proprietary innovations to FDA-approved, injectable drugs that offer longer commercial duration at attractive prices. Eagle has been a publicly traded company since February 2014. The stock currently has a market capitalization of just over $1.1 billion and the stock trades just north of $75 a share.

The company has four main sources of potential growth and/or high revenue generation on the horizon.

The key drug in Eagle's arsenal is a chemotherapy employed in the treatment of Chronic lymphocytic leukemia {CLL} and Slow-growing non-Hodgkin lymphoma {NHL}. This improved form of bendamustine is marketed by Teva Pharmaceutical Industries and is currently Teva's 2nd largest product with 88% market share. Bendeka received its own CMS (Centers for Medicare and Medicaid Services) J Code (announced on Nov 2, 2016) which will go into effect at the start of 2017. Because of this milestone, Eagle will receive a $40 million payment from Teva and revenues received from sales of Bendeka will increase from 20% to 25% of net sales. Teva has permanent rights to market Bendeka and the company believes that it will be patent protected through 2026. Royalty income from Bendeka accounted for 69% of Eagle's total revenue in the Q3 2016.

Ryanodex is already approved for the treatment of malignant hypothermia. Eagle is in talks with the FDA to expand the label to include 1. Extertional Heat Stroke {EHS}; and 2. Drug Induced Hypothermia (DIH). The company believes that the potential market for the EHS indication is 75,000 patients in the United States and the market for drug induced hypothermia is 125,000 (from Ecstasy and Meth overdoses). No drugs currently exist for the treatment of these afflictions and at approximately $2,300 a vial (and possibly as much as $4,000 to $4,500 per dose), this treatment could be a huge source of growth for Eagle. Ryanodex has been fast tracked by the FDA and has received Orphan Drug designation. Expect applicant filing to take place in January for EHS with a priority review and a launch this summer. Eagle hopes that the designation for DIH will result in a launch in 2018. Sales of Ryanodex (just for the treatment of malignant hypothermia) grew 92% to $2.5 million during the third quarter of 2016 compared to $1.3 million for the prior year period.

This improved formulation of fulvestrant is used for the treatment of hormone receptor positive metastatic breast cancer in post-menopausal women with disease progression following anti-estrogen therapy. The current regiment includes two painful deep tissue (gluteal) high viscosity injections that last one to two minutes apiece. Eagle's Faslodex only requires one low viscosity gluteal injection that is shorter and less painful than the current regiment. Right now Eagle is producing registration (stability) batches that must sit for twelve months. Given that there are no issues with the batches, Eagle expects to file an NDA in Q1 2018. Eagle is hopeful that the CMS will establish a unique J Code for Faslodex.

Eagle announced on November 11, 2016 its purchase of Arsia Therapeutics. Arsia is also a high-concentration, low viscosity delivery company, but in the field of biologics. With biologics starting to come off patent (including Neupogen and Remicade), the market for "biosimilars" is expected to grow to $20 billion to $26 billion by 2020. Arsia and Eagle will combine their expertise to produce "biobetters". The first biosimilar was approved in the U.S. in March 2015, with four biosimilars approved as of October 2016. Eagle paid Arsia $30 million ($2.7 million in stock; $27.3 million in cash) and if certain milestones are achieved Arsia will receive an additional $48 million.

Eagle also has an anti-coagulant for the treatment of thrombosis (Argatroban), a chemotherapy drug that interferes with cell division (Docetaxel), and an anti-inflammatory arthritis medication (Dicloflenac). 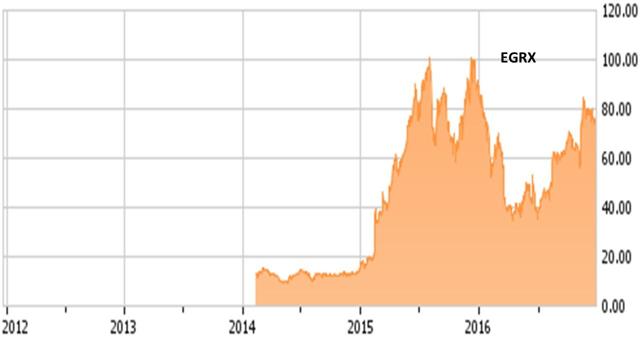 The company is under-followed on the street with only Piper Jaffrey, RBC Capital Markets, Mizuho, and William Blair assigning analyst coverage to the stock. Two have buy ratings, one has an outperform, and one has a hold. The average price target is $89. Eagle has earned $1.46 through the first nine months of 2016. It is expected to earn $3.18 in Q4 2016 and $4.64 for the year versus $.16 for all of 2015. Earnings in 2017 are expected to be over $5.50 a share. The big Q4 2016 estimate reflects the anticipated $40 million milestone payment from Teva. Eagle undertook a stock buy back program starting August 9, 2016 where it has repurchased $32 million in stock. At the end of the third quarter, the company had approximately 16.4 million shares outstanding.

With solid royalty income from Bendeka, excellent growth prospects in the United States and abroad for Ryanodex, excellent potential from Faslodex and its recent acquisition of Arsia, and a share repurchase program in place, Eagle still seems a solid bet at ~$75.00 a share (or a 13.3 P/E multiple on next year's estimated earnings) in the soon upcoming New Year.

Note: To get these types of articles on attractive biotech and pharma stocks as soon as they are published, just click on my profile and hit the big orange "Follow" button and choose the real-time alerts option. 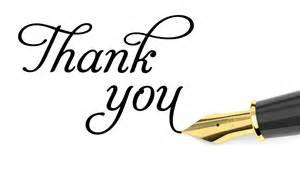 Disclosure: I am/we are long EGRX, TEVA. I wrote this article myself, and it expresses my own opinions. I am not receiving compensation for it (other than from Seeking Alpha). I have no business relationship with any company whose stock is mentioned in this article.