I am writing to you from Santiago de Queretaro, Mexico, where the whole country is having a yuuuuge Donald Trump victory sale. Mexico is one of my favorite countries to visit. It combines a laid back attitude, friendly people and an outstanding culinary tradition. It also helps that it's currently one of the cheapest places on the planet - one of many reasons that I've spent 5 weeks here recently (Yucatan and Central Mexico thus far).

Mexico has always been known as an affordable place with cheap beer and tacos, but the last two years have taken that dynamic to an extreme. Where else is the brand new AC Marriott $42 per night? In touristy San Miguel de Allende, we booked a 2,500 foot, 2 bedroom suite on the main square for $75 a night. Food for two with a bottle of mezcal is about $30 at the most posh of restaurants. It's verging on silly. Between the two-thirds decline in the Mexican Peso over the past two years and an over-dramatized fear of violence, the tourist economy is basically running on free. They're just happy to see you and thankfully, my Mexican fiancé can translate my pathetic gringo Spanish as we travel around. 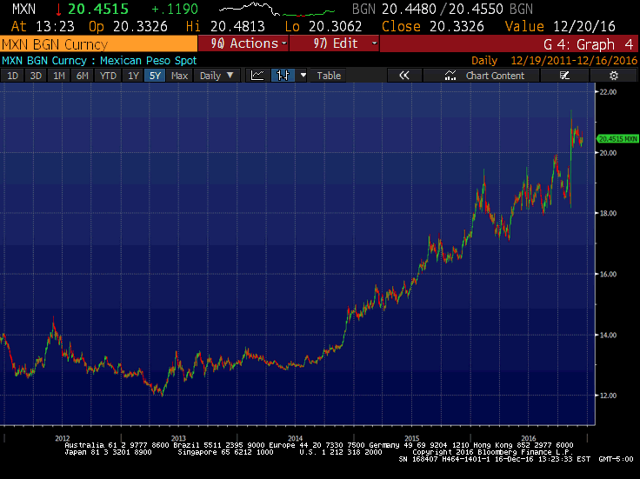 If you don't have a trip planned to Mexico, get working on it. I don't think it will stay this cheap for long. Let's start with the obvious question - is it dangerous? I tend to like statistics as opposed to jaundiced media reporting. The USA has a 4.5 per 100,000 homicide rate. Mexico is pushing 20, or about four times as bad. Given that I'm not terribly scared in America, four times worse doesn't seem that bad. When you dig into the numbers, you realize that much of this crime is drug related. In fact, if you aren't involved in narco-trafficking, the homicide rate isn't much worse than that of the USA. Furthermore, most of the violence seems clustered in a few cities and states. I wouldn't go to Baltimore or East St. Louis on vacation, why go to the Mexican version? Strip that all out and Mexico is on par with most of America. Unfortunately, a few dramatic incidents have cost Mexico millions of visitors a year. Eventually, perceptions will adjust to reality and the tourists will flock back - especially given how affordable it is.

I have now taken two trips to Mexico during the past 10 weeks. The whole time, I've kept asking myself, "How do you play this?" It's so cheap. Despite threats of change from Trump, I know this is an overreaction. Mexico is sure to bounce back and keep growing - though, the economy may shift slightly from manufacturing towards tourism due to how cheap it is to visit.

The thing is, just because something is cheap, that doesn't mean there's always a "play." There's an old adage in finance that you don't buy the currency of Spanish speaking countries. Pull up a 10-year chart of any of these countries and it will be obvious why that adage has weight - pull up a 50-year chart and you won't even be able to zoom into where we are today. The Peso has overshot recently, but it's not an asset I want to own.

What about assets benefitting from a weakening currency? In property, if you can borrow at a reasonable rate in a depreciating currency and get paid rent in US dollars, you're going to make a fortune. Unfortunately, for most foreign property companies, rents are long term and struck in depreciating local currencies. However, the hotel sector is largely immune to this. They can adjust their room rates daily. Fibra Hotel (FIHO12: Mexico) and Fibra Inn (FINN13: Mexico) have both borrowed in Mexican Pesos. Right now, the rates they're receiving are silly. Look up some of their hotels on the internet - $20 here, $30 there. This is because there is a lag in how fast they can re-price room rates to take advantage of the decline in the Peso - especially as many of their customers are business travelers with budgets in Pesos. However, their costs are mostly fixed, the assets were built with pre-depreciated currency - they're now worth much more in current Pesos than it cost to build them. The supply of new hotels will slow as it costs much more in current Pesos to build new ones - all the old ones have a massive competitive advantage until room rates fully reset. Meanwhile, due to Trump's victory and the decline in the Peso, Mexican hotel REITs are being priced like something awful is about to happen - instead, a weaker Peso is a huge boon to them.

In terms of valuations, I don't think annualizing current quarter cash flow is the correct measure to look at - as room rates in Mexican Pesos will likely rise in future quarters. That said; they trade at about ten times pro forma AFFO and pay pro forma Q4 dividends around 9% adjusted for stabilization of new assets. That's very cheap for a property company with minimal leverage. With mostly fixed costs, I can model these companies to be trading for more like 6 to 8 times AFFO looking forward a year - due to a normalization of hotel rates on a fixed cost structure. A more typical measure of valuation in the hotel industry is price per room. Adjusting debt for rooms still under construction, these companies trade at enterprise values of around $30,000 to $35,000 a room, while comparable rooms cost at least twice that to construct in Mexico. This would imply that they trade for less than half of replacement cost. Interestingly, the Mexican hotel market is much more fractured than the US market. As the market consolidates, there are lots of hotels that can be purchased for 10 cap rates - even before economies of scale at a larger REIT increase the returns. Given the low leverage at both of these companies and how cheap debt is, there is likely to be continued growth as these companies take advantage of distressed players and make highly accretive acquisitions. 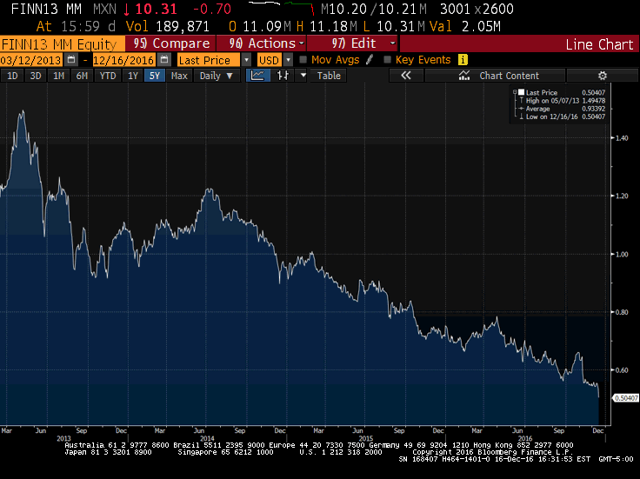 Fibra Inn priced in US Dollars since the IPO 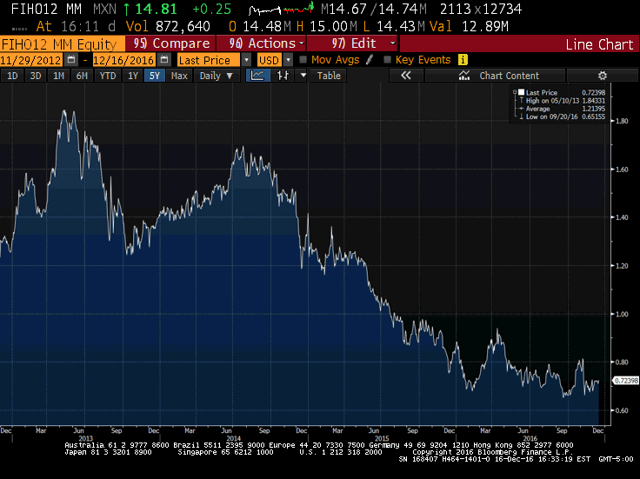 Fibra Hotel priced in US Dollars since the IPO

In summary, I have started small positions in each - I'm looking for further declines before I really add size. Deep down, I don't think they've bottomed yet. However, they're very cheap based on almost any metric you can use. They have growth pathways and the re-adjustment of room rates over the next few quarters should flow through the cash flow statements. Meanwhile, due to dividends, you're paid well to wait. No one ever gets the exact bottom and Mexico is stunningly cheap, incredibly close for Americans and I expect that travel will increase as a result.

Over the next few quarters, one of two things will happen - either Trump and Mexico will reach an acceptable solution on trade where the currency recovers and average daily room rates reflect something closer to historical rental rates in Mexico when priced in US dollars or the cheapness of the country drives more tourists and occupancy increases, while room rates are re-priced closer to previous dollar rates. Either way, I see RevPAR in US dollar equivalents increasing dramatically over the next few quarters. In any case, I'm celebrating Trump's victory with cheap cerveza, a cheap hotel room and two very undervalued REITs. I continue to seek out other opportunities in Mexico (stay tuned).

Adventures in Capitalism
1.01K Followers
My Name is Harris Kupperman, but everyone calls me Kuppy. I have been investing in the markets for over two decades and post my commentaries first at http://www.adventuresincapitalism.com