Looking at longer-term trends, unemployment is close to its historic lows. When looking over the last 65 years, those lows keep getting higher and higher. For unemployment to go down further, it would need to break this 65-year trend. With lack of participation, low productivity and aging demographics, we expect stimulus spending to turn into inflation. Added inflation with a lack of new growth would be negative for markets (NYSEARCA:NYSEARCA:SPY). 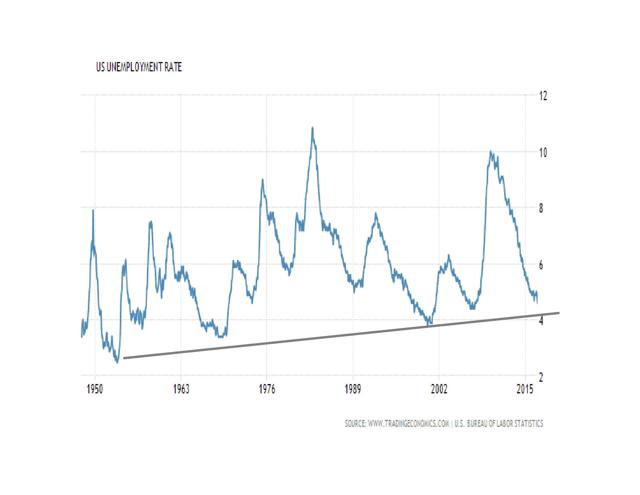 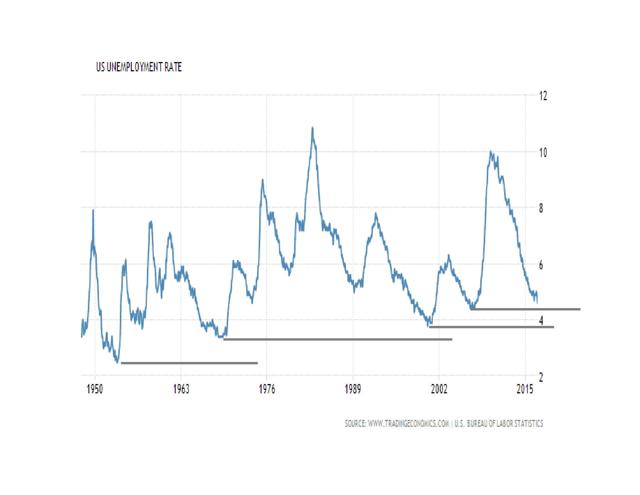 Above you see that unemployment has not made decisive lower lows in 65 years when it approaches into the 4-5% range.

There are major fundamental complaints by the Fed why this max economy has been lackluster. An aging population, declining productivity and lack of investment over time have been slowing the economy's max potential. Add to that a potential trade war in 2017, which would cut the global growth engine, and we could picture the above chart lines turning around and moving back up.

Based on both perspectives of the longer-term trends of unemployment, the economy looks like it is maxed out. 3% GDP isn't so exciting if that's considered max levels, but that's the facts as they stand today.

One reason the Fed raised their hike assumptions for next year at their recent FOMC meeting was because,

Those fiscal policies expected from President Elect Donald Trump's administration are expected to be extremely stimulative. They are calling for one trillion dollars in spending.

"I would say at this point that fiscal policy is not obviously needed to provide stimulus to help us get back to full employment."

Since we are at full employment and that full employment has been moving up over the years (two charts above), any additional stimulus may not drive growth. If there is not much incremental demand left in the economy by pulling people back into the workforce, those freshly printed dollars will likely lead to higher prices. That's inflation.

Spending may bump growth at some point but higher inflation and slow growth is a negative stock market combination. As we've been writing, inflation is the bubble popper because it forces central banks to break the record easing period of the last decade. That is bearish.

Spending in a maxed economy may not drive demand but it can drive prices. That's inflationary. Inflation and slow growth is a negative for markets.

Disclaimer: All investments have many risks and can lose principal in the short and long term. This article is for information purposes only. By reading this you agree, understand and accept that you take upon yourself all responsibility for all of your investment decisions and to do your own work and hold Elazar Advisors, LLC and their related parties harmless. Any trading strategy can lose money and any investor should understand the risks.