Unconventional behavior is the only road to superior investment results, but it isn't for everyone. In addition to superior skill, successful investing requires the ability to look wrong for a while and survive some mistakes. Thus each person has to assess whether he's temperamentally equipped to do these things and whether his circumstances - in terms of employers, clients and the impact of other people's opinions - will allow it … when the chips are down and the early going makes him look wrong, as it invariably will. Not everyone can answer these questions in the affirmative. It's those who believe they can that should take a chance on being great.

The quote that we start this piece with is from famed investor Howard Marks memo Dare to be Great II and it reflects the investment mentality that a gold investor has to have these days. As we start 2017, gold's weak performance to close the year may have deterred many investors but now that much of the speculative froth is gone from the market, the opportunity for superior investment performance lies in gold.

There is an old investment adage (I don't remember who said it) but it advises that to make big money in investing an investor must take a contrarian position in something that "everyone knows to be true" and be dead right. We see that opportunity now in the consensus opinion from investors that the US Dollar is going to get stronger, and gold is the way to play it.

Before we get into that let us review gold's performance in 2016, which was not too shabby considering the year-end plunge. 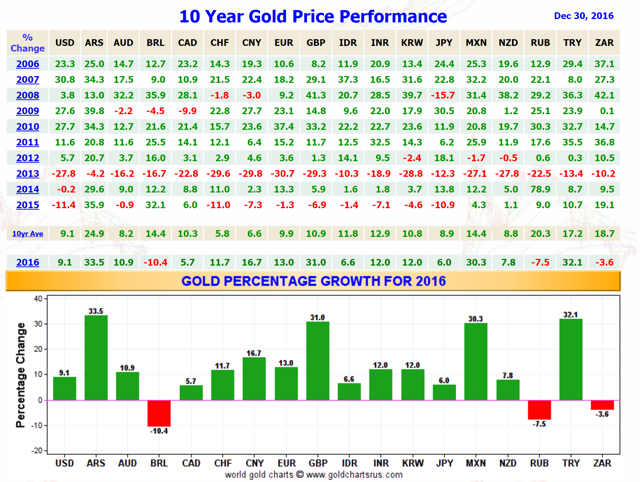 While it underperformed stock markets, a 9.1% gain is not too bad and if you are an investor outside of the United States, your gains in gold translated into your national currency were probably pretty good.

But markets and investors are forward-looking, so what really matters is what gold will do moving forward. But without further ado let us look at a trade that we think is one of the most exciting moving forward as we believe the consensus to be dead-wrong.

The US Fiscal Picture: More Than Meets the Eye

With the stock market (and US Dollar) surging on expectations of a Trump business-friendly administration, we think it is prudent for investors to take a step back and really analyze the true state of the US fiscal picture - which will certainly manifest itself in future economic growth or declines.

Let us first take a look at something that investors seem to have forgotten about: US federal debt.

The thing that makes the picture look even worse is that this is happening DESPITE interest rates relentlessly falling: 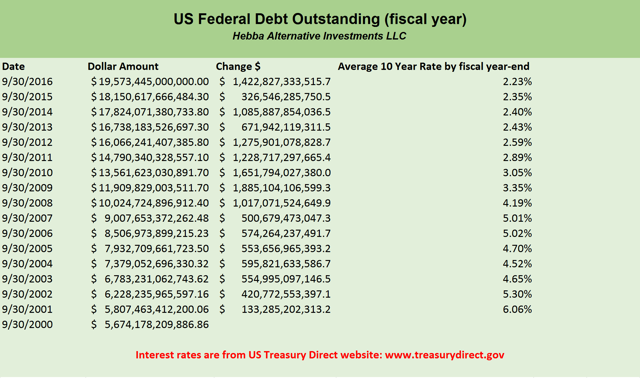 It is never good for a government when significantly lower interest rates do not lower annual deficits, but that is what we are seeing with the US fiscal picture. These are not our number, as all this information is available for public consumption at the US Treasury Direct website.

Grant Williams of the excellent "Things That Make You Go Hmmm" newsletter (which we HIGHLY recommend for all gold investors) perhaps explains these dynamics best:

In fact, if we look at the monthly changes in the average debt cost of the United States, we find that, in an astounding 77% of the months between 2000 and 2016, they fell.

And thank God for THAT because, due to the Credit Crisis and the measures enacted to stifle it, the national debt grew from $9.229 trillion at the end of 2007 to $20 trillion on Halloween of this year-a 114% increase in just 9 years as Barack Obama added the same amount to the U.S. debt in eight years that America's 43 previous Presidents has managed to accumulate between them in the previous 232 years.

Thanks to those persistently falling rates, the cost of servicing twice the amount of debt doubled increased from $430 billion to $432 billion. Ta-dahhhhhhh. Behold. Magic! 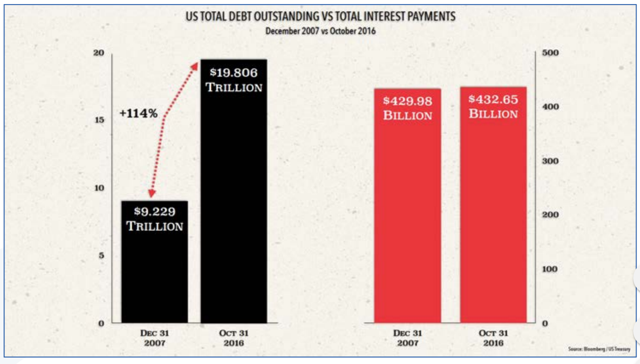 Another excellent chart from Grant Williams give us a very good picture of that. 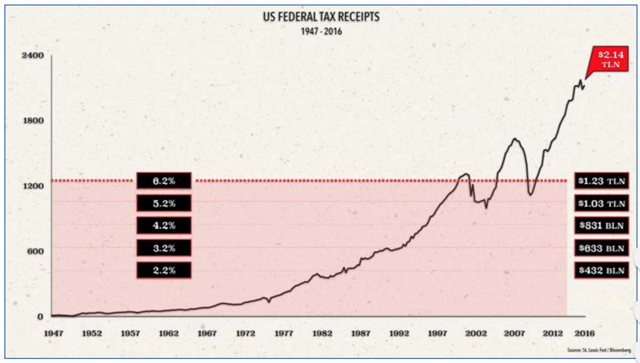 With a 1% rise in rates (which is very close to what has happened to rates since the US presidential election), the US would be paying around $633 billion dollars a year in interest. Not fatal, but certainly it would crimp the US budget. With a 2% rise to 4.2%, we are talking about $831 billion dollars - or around how much was used in TARP to rescue the US economy. Finally, with a 3% rise in rates to 5.2%, or what we used to pay before the financial crisis, the interest alone would rise to over one trillion dollars per year … in interest payments.

It seems like this is the path that Fed is heading US economy towards with the prediction of raising interest rates THREE times in 2017. Anyone see a policy mistake straight-ahead? We do…

Let us not forget the next president of the United States crowned himself the "King of Debt" in an interview with CNN earlier this year. With plans to spend what is predicted to be $500-$1,000 billion on a massive infrastructure plan, we do not see any reason 2017 deficit would be any lower than 2016. Add in the fact that this infrastructure plan will be done in parallel to massive individual and corporate tax cuts, and not only will the deficit soar past $1 trillion dollars in the new year, but we may see it get close to the days after the financial crisis when we got close to $2 billion in federal deficits.

One thing that we have forgotten to mention, the expected rise in US benefits: 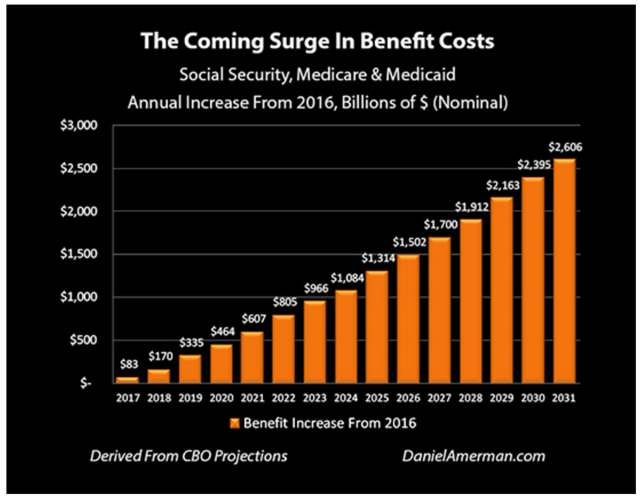 As is clear in the chart above, not only are benefits expected to rise, but they are expected to rise to levels that are simply unsustainable. These are not numbers we are creating, these are the predictions by United States' Congressional Budget Office - and it is based on a very rosy future financial picture with steady growth and no significant financial crisis.

To conclude let us do a recap:

Based on all this, you either get a warm and fuzzy feeling about the US fiscal picture OR you can do elementary school math…

But everyone thinks the US Dollar is going to get stronger … right?

Not EVERYBODY. It does not seem like the Russians believe that as they recently made their largest gold purchase in twenty years.

It doesn't seem the Chinese do either, and this should not be a surprise as back in November of 2013 Yi Gang, deputy governor at the Chinese central bank, commented that "It is no longer in China's favor to accumulate foreign-exchange reserves."

Here are how the Chinese holdings of US securities look since then: 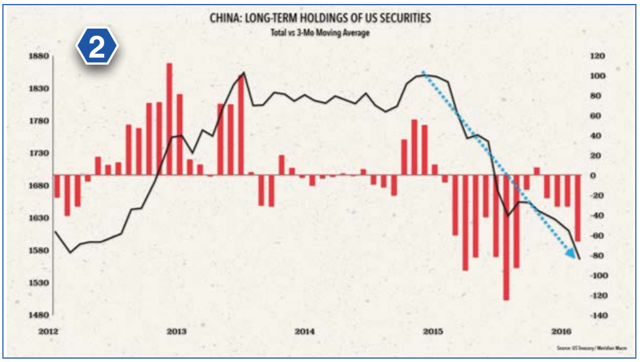 With everything that has happened since the election and the animosity the new administration has shown towards China, we doubt that any of this will change in the future.

Add the Saudis to the list as they are not only selling treasuries but also increasing their own bond sales denominated in US dollars - which means more competition for US securities. In fact, net foreign purchases of US treasuries across the globe are down to some of the lowest levels since the 1990's! 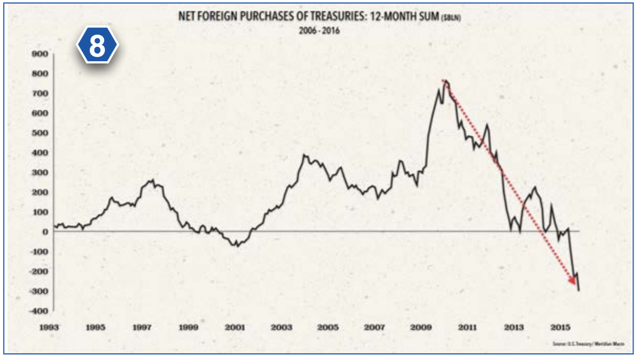 Across the board, foreign nations are selling US dollars and securities at levels that we haven't seen in decades. All of this is occurring into a future where there are going to A LOT more US securities (and thus US Dollars) being issued to pay increasing rates of interest, increased infrastructure and stimulus spending, and promised benefits to beneficiaries that are projected to rise to the trillions by the government's own financial watchdog.

Other than the fact that alternative national currencies are weakening at a faster pace because of their own financial troubles, we see NO FUNDAMENTAL REASON the US Dollar will get stronger in future years. A US Dollar getting stronger because its basket of comparative currencies (think Euro, British Pound, Yen) is getting weaker at a faster rate is simply not a sign of currency strength - it is a sign of a bad comparative basket.

As a central bank (or an investor) with hundreds of billions in reserves, which would you rather own? 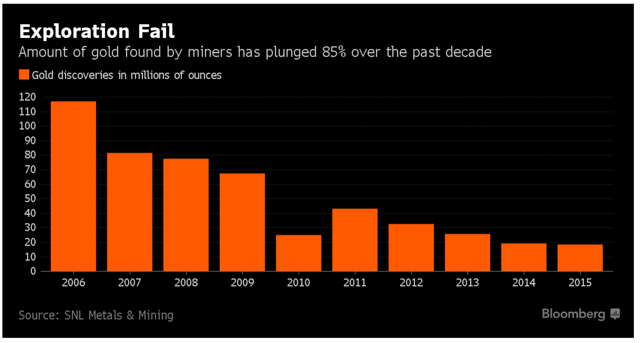 We know exactly which one we would want to own moving forward.

Maybe, just maybe, the consensus on a "stronger US Dollar" may be wrong, and without any currency looking anywhere close to healthy enough to replace the dollar's position in investor and central bank portfolios, we think that gold makes the best way to play this contrarian trade.

While we do not know if this trade will fully manifest itself in 2017, we do see catalysts ahead that could spark a review of the consensus position soon. Anything from the Fed raising interest rates, to a massive infrastructure plan blowing up US government budgets, to anti-Euro parties winning elections, or a bank failure due to higher rates causing a surge in bad loans - any of these or others could be the straw that breaks the camel's back.

Thus we highly recommend that investors take an anti-consensus position by buying gold as we believe the consensus view on the US Dollar is just plain wrong. Now we believe is the time to be building positions in physical gold and the gold ETFs (SPDR Gold Shares (NYSEARCA:GLD), NYSEARCA:PHYS, NYSEARCA:CEF). Silver is a little trickier than gold, but if it follows its historical correlation, then it should rise with gold so the silver ETF's (NYSEARCA:SLV and NYSEARCA:SIVR) make good investments as well. Finally, good mining companies should make the best investments as their leverage to gold will be much greater than the underlying metal - investors should just make sure they do not buy some of the financially weak companies.

As we move into 2017 we think that investors should buy gold and dare to be great.

Hebba Investments
7.34K Followers
I'm an asset manager at Hebba Alternative Investments with a focus on real assets. In my articles I like to focus on events that affect the macro environment for assets (especially gold and silver), and also introduce readers to different metrics that I believe are under-utilized when assessing investments. On a more personal note, I'm a firm believer that there can be honesty, morality, and integrity in finance (though its rare) and i'd like to believe that I stick to those principles. Thus I never "pump and dump" stocks, I always list the securities we own, and I take it very seriously when I recommend a company - I do not want to see any investors/readers lose money because of my recommendations. I'm not always right with recommendations, but investors and readers can know that I always tell the truth (there is no deception) and I eat my own cooking as recommendations are either always owned OR the reason I dont own them is given (usually related to restrictions on stocks I can buy). Advising people in financial matters is a serious issue and integrity is much more important than money to me, but I do believe both can co-exist. You live with money, but after your death you only have your morality and integrity and thus i've made my choice between the two. A bit philosophical for a bio, but I dont think there's a better way to give investors my background than that. We offer investors a free weekly email list detailing gold, silver, and general economic markets which you can sign up for at: http://www.communitysynergy.com/subscribe/hebbainvestments_subscribe.html

Disclosure: I am/we are long SGOL, SIVR. I wrote this article myself, and it expresses my own opinions. I am not receiving compensation for it (other than from Seeking Alpha). I have no business relationship with any company whose stock is mentioned in this article.