Valeant (VRX) is a hated stock with a very cheap valuation (due to bankruptcy fears, perhaps a bit overblown as you will see below). I believe Valeant is currently near the point of maximum pessimism, which provides investors with the maximum return potential. 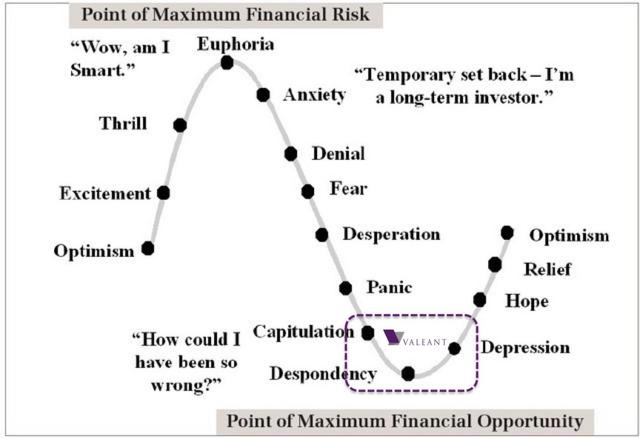 Investors today have an opportunity to buy Valeant at historically low multiples. 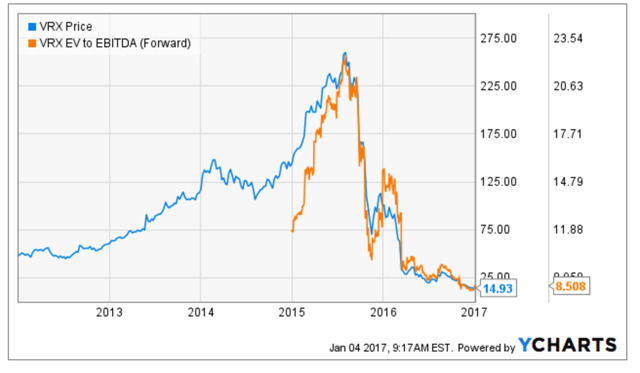 I think there are 3 Paths to a multi-bagger stock for Valeant:

Valeant has a strong drug pipeline with a total of 134 active projects underway (76 are in Bausch & Lomb); 20 in dermatology, and 16 in GI. The pipeline is heavily weighted to products that company expects to launch over the next three years: 80% of projects are expected launch in the 2017 to 2019 timeframe

Bill Ackman, on July 14, 2016, said on CNBC that Valeant has a very diversified portfolio of assets and they have $10 billion worth of assets that shareholders don't even know exist that would certainly be defined as non-core.

I think Mr. Ackman was referring to the drug pipeline and more specifically selling drugs that have good potential, but do not currently generate cash flow, therefore, they are not on the top of investors' minds, these are essentially "hidden" assets.

Now obviously, the potential profitability from the drug pipeline is NOT reflected in the current EBITDA figures. However, there seems to be a misconception out there, that if the company sells assets then EBITDA will decline also. This is NOT necessarily true. Valeant could sell some of its drugs (134 in drug pipeline), receive cash now which it could use to pay down debt WITHOUT negatively impacting EBITDA. This point seems to be lost on many investors it seems. The Company would be giving up future cash flow upside for debt reduction today (and reduce bankruptcy risk) by selling some of these drugs. As 80% of projects are expected launch in the 2017 to 2019 time frame, this is a very important point as it impacts the second point (below).

Therefore, the Company can successfully sell some drugs as part of the package of sale of non-core assets, then Debt/EBITDA levels could come down also. This will result in a significant multiple re-rating for the stock. A 12x EBITDA multiple, implies a ~$60.00 target share price.

For example, Brodalumab which is Valeant's psoriasis drug is scheduled to be in the market early this year. JNJ's psoriasis drug Stelara does around $2.5 billion of sales. If Brodalumab has sales potential of $1 billion of sales per year, then at 40% EBITDA margin (my assumption), the implied EBITDA is $400MM. Applying 8x multiple to that figure, would result in sale value of $2.4 billion for the drug. A sale of this drug would not impact EBITDA but the debt would be reduced. Now I am not saying that this asset will necessary be sold, but trying to show the potential of monetizing these hidden assets (without impacting current EBITDA and Debt/Ebitda ratio).

2) Debt is Manageable and Could be Reduced / Refinanced

Valeant has around $30 billion of debt. Please notice that the good thing for the Company is that the debt is NOT due all at once but due with varying maturity dates. This is a very important point and I feel like investors focus on the amount of debt only, without considering a timing of the debt to be paid. 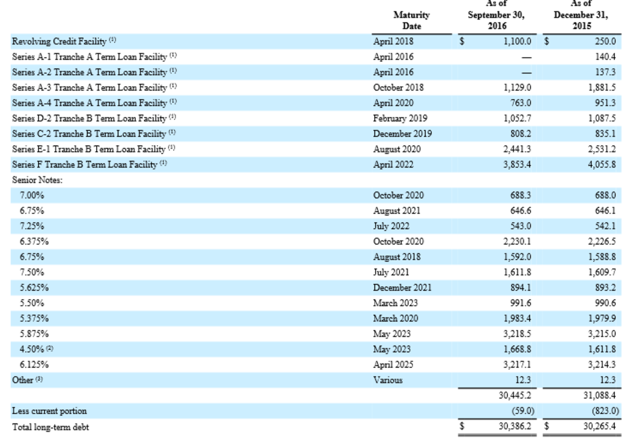 After that, there is around $2.0 billion of debt due in 2019, and more later. So the company has another 16 months or so to get its act together, improve its operating performance and sell some non-core assets.

Now it is not difficult to see a path where the debt in 2018 can be taken off with the current FCF (after interest expense) of the company in 2017 of let's say around $2.0bn in addition to some "hidden" asset sales (of either new drugs in pipeline which should NOT impact EBITDA or some cash flow producing assets) - the margin of safety is quite high I would day (and probability of bankruptcy is quite low).

On top of that if 80% of the drug pipeline is expected launch to be launched in the 2017 to 2019 time frame, then Valeant should be in a position to successfully refinance the debt (or roll the bonds, extend their maturity given it will have the HIGHER cash flow {from new drugs} to service the debt). If the company has strong cash flow and solid drug pipeline, then creditors would be happy to let the company refinance its debt. This will result in a significant multiple re-rating for the stock. A 12x EBITDA multiple, implies a ~$60.00 target share price.

I believe that there is a high chance that Valeant will be sold in parts in 2017 at a much higher price. Management has indicated that the company will sell its "crown jewels" or core-assets if they get a good price. 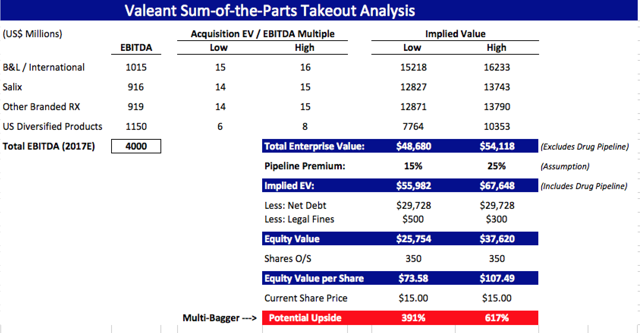 Valeant is severely undervalued at ~$15.00 and there are several paths to a solid multi-bagger. My sum of the parts takeout price provides a range of around $70.00 - $110.00 for Valeant.

Hades Investment Ideas
174 Followers
I am a successful private investor who is passionate about investing in growing, high-quality, "wide moat" companies that trade below their intrinsic value. I am a CFA Charterholder and hold an MBA from an Ivy League Business School.  The following are the three key pillars of my investment philosophy:1) Great Businesses: Acquire high-quality predictable businesses with wide economic moats (i.e. sustainable competitive advantages or high barriers to entry), pricing power, strong market positions, high free cash flow generation and high returns on invested capital. 2) Excellent Management: That has significant experience in their industry, is incentivized properly with substantial ownership, and is focused on creating shareholder value by increasing free cash flow. 3) Margin of Safety: Acquire these businesses at a significant margin of safety to intrinsic value, ideally when they are out-of-favor. Attractive risk/reward relationship with strong upside potential of at least 50% and downside risk of no more than 15%. Think about valuation in terms of expected value (taking into account the probability of various upside/downside scenarios).

Disclosure: I am/we are long VRX. I wrote this article myself, and it expresses my own opinions. I am not receiving compensation for it (other than from Seeking Alpha). I have no business relationship with any company whose stock is mentioned in this article.