President Trump has promised to end the long-standing, infuriating tradition of "sticking the US Government with the tab." He has already made lowering prices for military aircraft a pillar of his transition into office.

President Trump has already met with the both Boeing (BA) and Lockheed Martin (LMT), which have promised to lower the prices for Air Force One and the F-35 fighter jet program. These lower prices will no doubt trickle down to subcontractors.

While Boeing and Lockheed Martin have been the "poster children" of this policy initiative, everyone in the aerospace industry knows that one company stands out when it comes to egregious price increases foisted on the government:

TransDigm's business model is to aerospace as Valeant (VRX) was to the pharmaceutical industry. TransDigm acquires airplane parts companies (over 50 in total), fires employees, and egregiously raises prices. This business model has made it a dominant supplier of airplane parts to the aerospace industry while burdening its balance sheet with sky-high debt load: in fact, 6.5x EBITDA leverage.

TransDigm's single largest customer is the Department of Defense, followed by Boeing and Airbus (OTCPK:EADSF). On December 12, then president-elect Donald Trump told America:

President Trump, have a look at this!

Note: Boeing and Lockheed gross margins are 13.6% and 10.91%, respectively. TransDigm boasts gross margins of 54.5%, selling airplane parts to the government.

But you can argue that Boeing and Lockheed are OEMs while TransDigm is a parts supplier. Fair point. So next we compare TransDigm to its peer group. This analysis shows how much of a gross outlier it has become with regard to the amount of money it is making off the U.S. government. 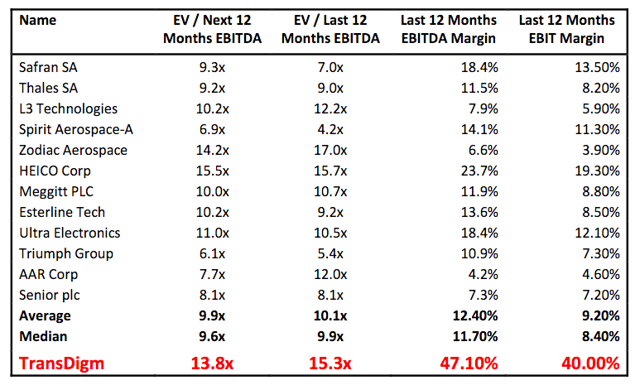 So, how does TransDigm rack up such outsized margins?

We have sifted through the Haystack Gold database, the leading defense parts and logistics management system, reviewing historical prices of over 50,000 aircraft parts. The price differentials from pre-acquisition and post-acquisition, when TransDigm acquired its prior manufacturers, are there for all to see.

We acknowledge The Capitol Forum for assembling just a small snapshot of the impacts of this game.

The TransDigm business rests on the dangerous acquire/leverage/price-raise maneuver that has become too eerily familiar on Wall Street. After watching Valeant's stock go from 250 to 15, Wall Street learned a lesson about operating leverage.

So, Where's TransDigm's Stock With a Bit of Scrutiny?

We start with Wall Street's consensus model for TransDigm. Using the analysts' numbers who base their models on raising prices, we get to a valuation of $166 a share if they are merely preempted from further price raises... this has nothing to do with rolling back any prior ones.

The ugly underbelly of TransDigm's business is that aggressive year-over-year price increases are the only thing shielding the company from revealing negative organic growth of close to -10%. Any combination of U.S. government pressure and/or OEMs pressing on their own supply chains will expose the company's business to actual gross revenue contraction and a devastating cut in EPS, followed by multiple contraction.

This Model Changes Nothing Except Zero Price Increases! 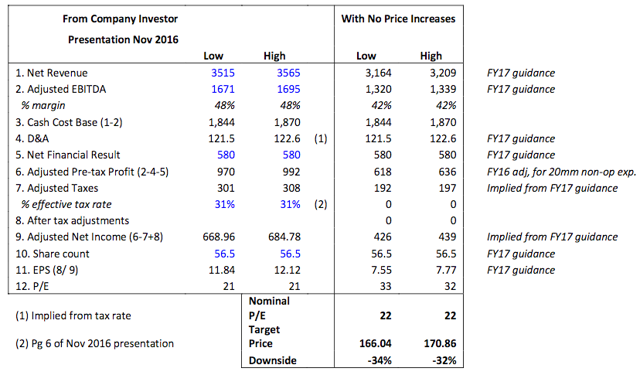 Consider this: If TransDigm were to operate with the same EBIDTA margins as HEICO (HEI), its next closest competitor on EBITDA margin, which is still double that of the rest of its peer group, its EPS falls 85% and the stock is $40 a share. We do not even project the margin compression that would be inflicted on TransDigm if and when it experiences this type of pricing pressure. That would tank the share price to even lower levels.

Note: In the past 18 months, nothing has fundamentally changed for Valeant as a company, beyond a torrent of negative news coverage. Its pharmaceuticals are still sold worldwide. Bausch & Lomb is still the premier e name in eye care. What has really changed is the stock price. Wall Street is now forced to deal with the company's inability to raise prices while being burdened with extreme debt levels.

We add that our commentary of "firing employees and raising prices" is not just Citron's narrative, but is also the subject of lawsuits of companies TransDigm has acquired. Organic growth goes down, profits go up. TransDigm was sued in 2011 by the seller of Dukes Aerospace for raising prices, cutting headcount aggressively, and causing Dukes to get pushed out of programs that required future R&D.

How the Government Can Easily Crack Down on TransDigm

The obvious response to this Citron criticism would be that the government can't do anything about TransDigm's pricing policies. If that were the case, then why would Boeing and Lockheed both agree to lower pricing in the context of just a single presidential meeting?

The truth is that the government has already been down this road, scrutinizing the price gouging perpetrated by TransDigm. It now simply has to enforce what it already knows is wrong. Just to show that the mechanism for a government crackdown is already in place. Here are excerpts from a Department of Defense Office of Inspector General audit in 2006:

The Director also commented that supply chains have been asked to report on the suitability of reverse engineering TransDigm items.

Here are some of the ways TransDigm thwarted this excessive cost audit.

You have to ask yourself if these kinds of stonewalling tactics would work in the Twitter era against the force of a fierce cost-cutter and BS-cutter-through-er.

From the same audit report, we read:

We ask if TransDigm investors riding the gravy train of highly leveraged profits based on a "price jacking" strategy even know the U.S. Office of Inspector General runs a "Department of Defense Hotline" for pricing complaints? We think this entire report plus the spreadsheet attachments should make a good submission... we did it with Valeant.

The easiest way for the government to encourage competitive bidding would be to audit the bidding process. It will find how TDG has been able to use the guise of multiple shell distributors, who have no pricing power, to make a bid seem competitive when in reality they are all shills for TransDigm - this will be addressed in future reports. TransDigm has perfected the sole source model that understands government thresholds that avoid scrutiny - for now.

Every TransDigm investor should read the company's own disclosures from its 10-K. They are a chilling forecast of their inherent business vulnerability under an administration seeking to save money by creating better deals for the U.S. government. Note from these disclosures that the U.S. government already has enormous power and leverage in its relationship with TransDigm: 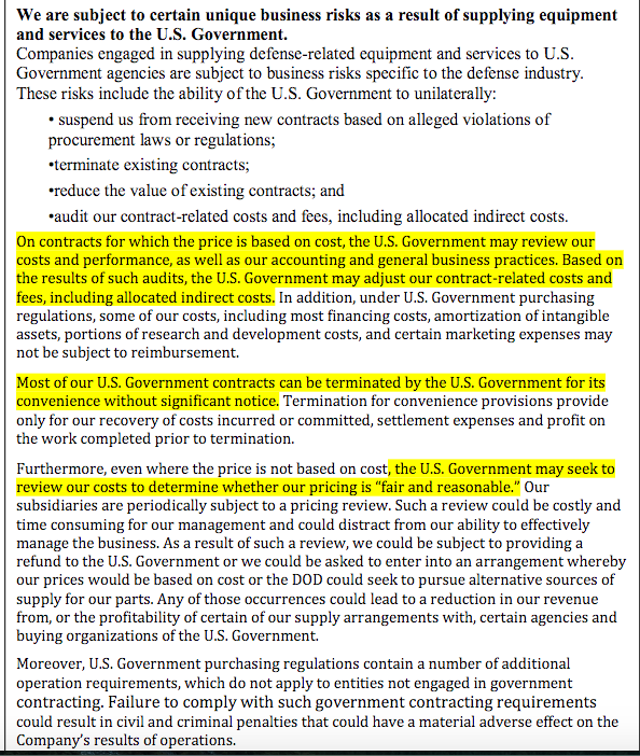 There are other important macro headwinds facing TransDigm that are evident today. These are some but not all of the issues:

President Trump: Do you know when your 757 plane "Air Trump" is down for a day and you wondered why a replacement air filter, valve, pump or coffee maker cost $20,000? The reason was TransDigm.

While you are looking to Boeing and Lockheed, the easiest way to drain the swamp in the aerospace industry can be relegated to shine some sunlight on: TransDigm.

Cautious investing to all.

Citron Research
6.15K Followers
Andrew Left's Citron Research (http://www.citronresearch.com/) (formally known as Stocklemon.com) seeks to expose companies whose management is in some way misleading investors. Left digs into SEC filings, financials, management histories and other data to uncover such situations, and he is usually short the stocks he writes about. Mr. Left has been publishing for 7 years and has created a track record that is unrivaled in short selling. Mr. Left has been cited in Barron's, Wall St Journal, CNBC and other major publications repeatedly for his work. Mr. Left was also an invited speaker at the reknown Master Investor Conference. Visit: Citron Research (http://www.citronresearch.com/)

Disclosure: I am/we are short TDG. I wrote this article myself, and it expresses my own opinions. I am not receiving compensation for it. I have no business relationship with any company whose stock is mentioned in this article.