PacketZoom recently analyzed the top 100 websites and compared it with the top 100 mobile apps to see which CDN solutions are dominating the competitive landscape and to determine how much variation there is in CDN market share between web and mobile apps. The data shows that Akamai (AKAM) is leading the market with 35.3% market share (no surprise) with vendors such as Fastly, Verizon (VZ) and Amazon (AMZN) following a 3:1 ratio. In addition multiple smaller players indicate it's already a mature and saturated market. 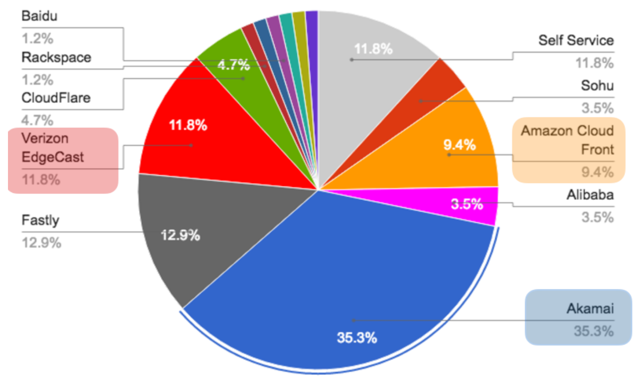 PacketZoom also analyzed the top 100 mobile apps, including names like Netflix (NFLX), Uber (UBER) and Snapchat (SNAP) and broke down the findings by CDN market share, looking for the dominant players. This time around the results show that Amazon is leading with a 40% market share, most likely due to its strong developer relationships. Since Amazon's content delivery service CloudFront integrates with other Amazon Web Services offerings, it offers developers an easy way to distribute content to end users, hence putting Amazon on top. Akamai and Verizon follow with 14% and 11% market share respectively, along with fewer smaller players which indicates an evolving market. 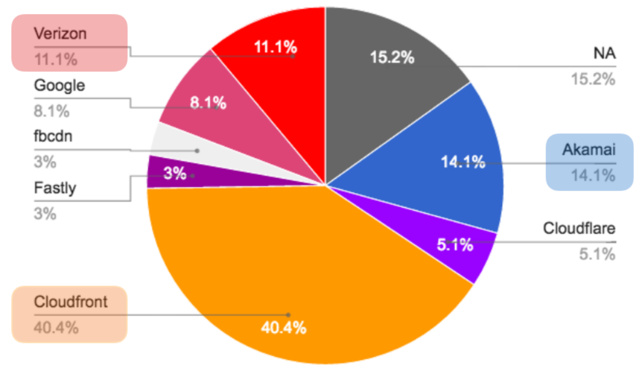 The key takeaway from this data is that the mobile app market is a new world that's very different from the commoditized CDN market and one that is growing faster than anyone had predicted. Mobile apps require delivery solutions that have been designed with a mobile-first world in mind, something many CDNs still struggle to do.

PacketZoom shows optimal results with Amazon CloudFront since both solutions are running in the same data centers, which saves the need for an extra network hop to the CDN edge server. Multiple mobile app developers that are already enjoying the ease of use of Amazon CloudFront have told me that coupling it with PacketZoom's Mobile Expresslane is the easiest and most powerful way to maximize mobile app performance. What's interesting about new solutions coming to the CDN market is that they aren't trying to displace the traditional CDNs but rather make them better. PacketZoom's in-app technology is uniquely positioned as a CDN enhancer and not a CDN replacement. By removing roadblocks in the mobile last mile, PacketZoom says they are able to significantly accelerate performance by 2x to 3x, rescue up to 80% of sessions from TCP connection drop and reduce CDN costs.

Dan Rayburn
925 Followers
Dan Rayburn is considered to be one of the foremost authorities, speakers, and writers on streaming media technology and online video business models. An avid blogger, author and analyst, Dan is often referred to as the "voice of the industry" and has been quoted in more than a thousand news items by nearly every major media outlet over the past twenty years. His blog (streamingmediablog.com) is one of the most widely read sites for broadcasters, content owners, Wall Street money managers and industry executives in the online video sector. His articles have been published by the WSJ, NYT, CNN, Huff Post, Fortune, Business Insider, Gizmodo and he has been interviewed on Bloomberg, FOX, CNN, CBS, CNBC, and NPR amongst others. Due to his expertise in the content delivery market, he has also received invitations to speak as a witness at hearings by both the U.S. Senate and U.S. House of Representatives on topics pertaining to net neutrality, telecom mergers and content delivery architectures. He is also the Chairman for the NAB Streaming Summit conferences that take place in Las Vegas and NY. nabstreamingsummit.com
Follow