Just when you think Kinder Morgan (NYSE:KMI) has the Trans Mountain Expansion Project (TMEP) approvals all wrapped up, this happens. Many are under the impression that all the approvals are complete regarding Kinder Morgan's TMEP project, yet this is not the case. According to Canada's Official National Energy Board website, the detailed route approval process has only just begun. Kinder Morgan recently began the process of issuing letters to Burnaby, B.C., landowners whose property falls on the pipeline corridor, outlining how the project will impact their land. 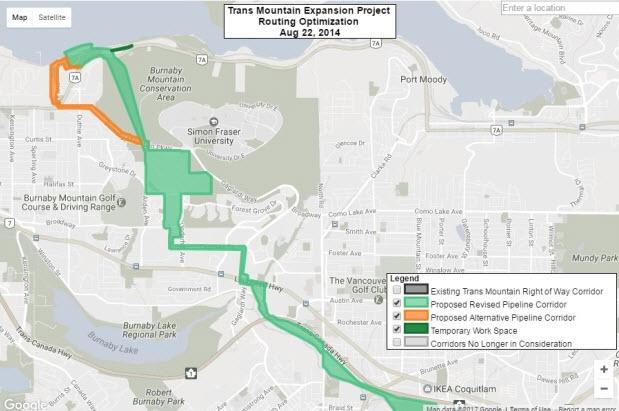 According to the NEB:

Trans Mountain must now prepare and submit its actual Plan, Profile, and Book of Reference (PPBoR) for each segment of the proposed detailed route to the NEB and serve written notice to landowners whose lands will be crossed by that particular segment of the route. Trans Mountain must also publish notices in local newspapers along the pipeline route as set out in Appendix II - List of Publications to the NEB's letter. The newspaper notice includes a map and a list of the lands proposed to be crossed by the pipeline.

Ali Hounsell, a spokesperson for Kinder Morgan stated regarding the process:

The route remains offensive. They are now looking at going through the Burnaby Mountain conservation area, which is not a good alternative as far as we're concerned. It will have a significant impact on our conservation and park area. 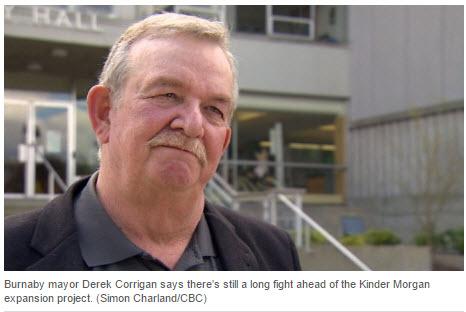 What's more, Mayor Corrigan takes umbrage with Kinder Morgan's position that no residential areas will be negatively impacted. Corrigan went on to say:

There is no way that they can bring this pipeline through a very dense urban area and not have an impact on residents in general, and some residents in particular.

Approval of the detailed route amounts to the opposition's last stand in my book. Sure the project has been approved by the Canadian and British Columbian big shots, but when it comes down to local approve of the detailed route, this is when the rubber meets the road. I expect the locals to put up a huge fight at this point. Local residents whose land is impacted may file a letter of opposition to the route. Below is a flow chart of the detailed route approval process for your review. 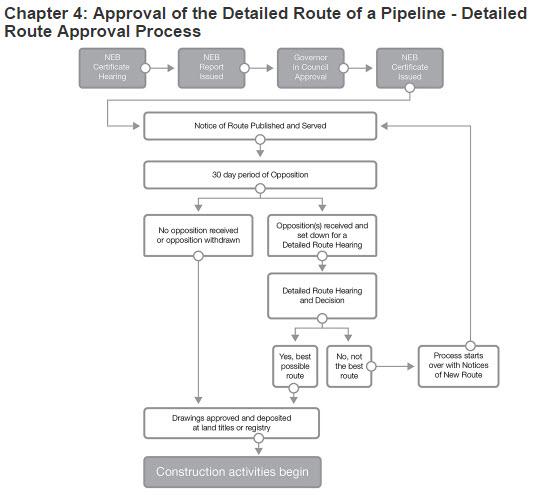 On top of all this, the City of Vancouver just requested its own judicial review of the B.C. government's approval of the project. You can add this to the numerous open cases filed by the opposition to the TMEP.

Kinder Morgan investor relations team did not appear to be extremely concerned about the opposition to the project. It pointed out that the Burnaby Mountain protesters were handled effectively and the company's exploratory work in the area was completed without incident. This was good news, yet only the tip of the iceberg, if you ask me. So what are dividend growth and income investors to do?

I believe Kinder Morgan will complete the Trans Mountain Pipeline project at some point, yet the risk may not be worth the reward for dividend growth and income investors with the stock currently yielding merely 2.2%.

What's more, I am still not convinced the TMEP project will be the windfall it was expected to be when it is all said and done. I'm waiting for the news regarding shippers being locked in and what kind of joint venture deal for 50% of the project Kinder Morgan gets prior to starting a position. The fact that a dividend increase for 2018 is potentially on the table is very tempting. Nonetheless, the disposition of the TMEP joint venture is crucial to the company being able to achieve any such increase.

The Trans Mountain project may seem like it's a lock at this point. Nonetheless, as you can see by what happened to Kinder Morgan's much heralded NED project, nothing is a certainty until the shippers are locked in and the final detailed route is approved by the affected landowners.

For me, it is an easy pass for conservative dividend and income investors. On the other hand, if you have a high risk tolerance, this may be just the time to start a position if you are a deep value investor like David Tepper. The stock is still down significantly from its all-time highs, yet up significantly over the past 52 weeks. We may see a large chunk of that gain vanish in short order if things start to go south for Kinder Morgan's crown jewel. The chart looks fairly bleak at this point if you ask me. 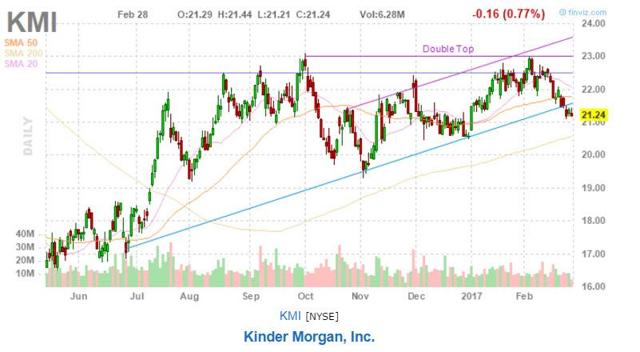 The stock has broken through support at the 50-day SMA substantially. I would like to see a bounce off the 200-day SMA prior to starting a position. I hope you found this information relevant and informative. It pays to turn over all the rocks before putting your hard earned money at risk.

Those are my thoughts on the matter. I look forward to reading yours! Do you believe the Trans Mountain project will start by the end of 2017? Is Kinder Morgan a buy right now for dividend growth and income investors? Or is it a deep value play?

If you found this article interesting, please hit the follow button above. I would greatly appreciate it. Please use this information as a starting point for your own due diligence.

David Alton Clark
31.08K Followers
Author of The Winter Warrior Investor
The #1 Service for Income Coupled With Growth Targeting 20% Total Return
I have been a Seeking Alpha Contributor for over a decade. I became a CNBC Contributor in 2015 for having the #1 track record according to stock pick returns. I was also featured in BARRON'S for being the Top Performing Financial Expert according to TipRanks from 2010-15. In 2020, I was named "Blogger of the Decade" on Yahoo Finance for having the best stock picking track record from 2010 to 2020. In addition, I am a currently a licensed REALTOR® in the state of Texas, a former FINRA registered OIl & Gas securities representative, banking industry executive with Citibank, and auditor with EY, a major accounting firm. I received my BBA in Accounting (With Honors) from the University of Texas - San Antonio.

I am a self-made man and started out my career in the US Army's 10th Mountain Division as a Mountain Infantryman. I am a member of the DAV and a Disabled Veteran. I  have managed my own portfolio for the past 30 years. This includes successfully navigating the 2000 and 2008 bubbles, so I completely understand the full cycle the market can take. People who know me in investing circles call me the "Bubble Surfer" for my ability to preserve capital during times of duress. My professional background has provided me with an intimate knowledge of corporate financial statements and how companies actually make money. This expertise and wisdom is the value I wish to share with you. Here is a profile of me featured in the Globe and Mail detailing my career.

DISCLAIMER: David Alton Clark is not a Registered Investment Advisor or Financial Planner. The Information in his articles and his comments on SeekingAlpha.com or elsewhere to be used as a starting point for your own due diligence. Do your own research and always consult a registered investment Advisor.