Merck & Co. (NYSE:MRK) dropped a bombshell in late February, after the company reported in its Form 8-K filed with SEC, that it will take a $2.9 billion write-down on its experimental hepatitis C drug MK-3682, uprifosbuvir, citing changes to its expectations for pricing and market opportunity. Uprifosbuvir was obtained in connection with the $3.85 billion acquisition of Idenix Pharmaceuticals, Inc. back in June 2014. Merck also said in the filing that it reduced its reported fourth-quarter 2016 GAAP EPS, from $0.42 to a loss of $0.22, and full-year 2016 GAAP EPS from $2.04 to $1.41, meaning its GAAP EPS last year is now down 10%, instead of up 31% on a year-over-year basis, while revenue growth was flat.

In the release of its fourth-quarter and full-year 2016 financial results in early February, Merck forecasted GAAP EPS for the full-year 2017 between $2.47 and $2.62, and non-GAAP EPS between $3.72 and $3.87 on revenues between $38.6 billion and $40.1 billion. These numbers may also have to be revised downward if Merck's aggressive pricing strategy for its hepatitis C drug Zepatier (elbasvir/grazoprevir), which received U.S. Food and Drug Administration or FDA approval in January 2016, can't drive exponential sales growth this year. In the fourth-quarter 2016, Zepatier sales grew at a 40% pace on a quarter-to-quarter basis, generating $229 million in quarterly revenue, while the major hepatitis C virus or HCV drug market plunged over 32% during the same period.

Merck is not the only casualty in the hepatitis C drug price wars, as political pressures from U.S. politicians and the Congress to lower prescription drug prices continue to build. In early February, Gilead Sciences (NASDAQ:GILD) slashed its sales and growth forecasts of its hepatitis C drugs, Harvoni (ledipasvir/sofosbuvir), Sovaldi (sofosbuvir) and Epclusa (sofosbuvir/velpatasvir), to between $7.5 and $9.0 billion and between 39.3% and 49.4% year-on-year, respectively, citing lower patient starts, increased competition and shorter duration of treatment. Despite the sales plunge, Gilead still controls over 80% of the hepatitis C drug market share and its HCV product sales are expected to account for 35% of the company's total revenues in 2017.

According to Arlene Weintraub at FiercePharma, both Gilead CEO John Milligan and Merck CEO Ken Frazier have received tough questions from analysts during their respective fourth-quarter earnings calls about whether they should boost their pipelines via acquisitions. Both CEOs made it clear they are out shopping for deals that would be good strategic fits for their companies.

Gilead's Milligan did not give many hints whether the company has any plans for strategic acquisitions at the fourth-quarter conference call, but mentioned in his introductory remarks that Gilead will focus its efforts in 2017 on "pursuing partnerships or acquisitions that are the right strategic fit." In the release of its financial results, Gilead reported a cash stockpile (including cash, cash equivalents and marketable securities) of $32.38 billion at the end of the fourth-quarter 2016. The company hired Alessandro Riva, MD, former Head of Novartis Global Oncology Development, in early January to run its hematology and oncology division, which leads many to believe that M&A might be on the way. 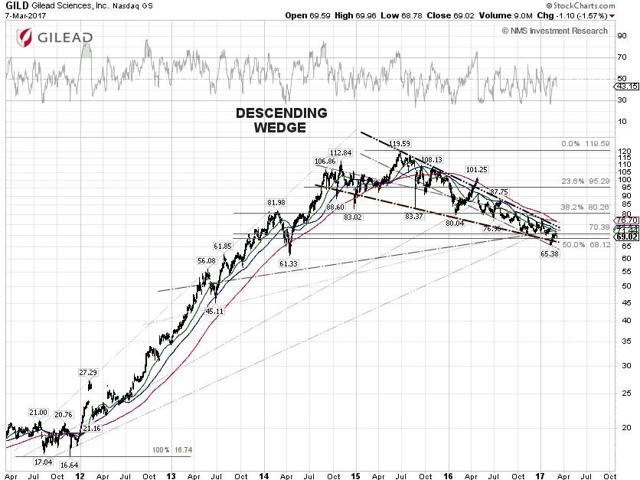 Gilead shares have been in a downward trend for over a year and a half, reflecting HCV product sales, which have declined about 34% since the fourth-quarter 2015. The stock is now bumping into the $70.38 resistance level and may have difficulty to break through due to a significant amount of head resistances and overhead supply, as investors are motivated to sell their shares when the price returns to the level at which they bought it so they can get out at a break-even point. In our view, Gilead shares could be stuck in this trading range until the company's management can reassure investors with its top-line growth strategies.

Merck's Frazier told Christopher Schott, an analyst at JPMorgan Securities, at the first-quarter 2016 earnings conference call back in May 2016, "And so I guess what I'm signaling is I'm not focused on a large consolidation type merger such as we've seen in the industry in the past. But I also think that bolt-on acquisitions can be larger than, for example, a Cubist."

In January 2015, Merck acquired Cubist Pharmaceuticals, the developer of Cubicin (daptomycin), an I.V. antibiotic for treatments of bacterial infections of the skin and underlying tissues, for a total transaction deal of $9.5 billion. Cubicin sales in the fourth-quarter 2016 plunged 63%, after patents on the drug expired in June 2016 and the entry of generic competition, including from Teva Pharmaceutical Industries Ltd's (TEVA) Daptomycin. Since its launch in the fourth-quarter 2014, Cubicin has generated total sales of about $2.22 billion.

The Wall Street Journal reported a potential mega-merger deal between Biogen, Inc. (BIIB) and Merck or Allergan PLC (AGN) in early August after an announcement that Biogen Chief Executive George Scangos was stepping down and that the company was searching for a new CEO, but the rumors have since died down.

Merck's near-term revenue growth problems remain but they are less severe than those of Gilead. While sales growth of Zepatier is in question, the company can still rely on sales from its top-selling type 2 diabetes drugs Januvia (sitagliptin) and Janumet (sitagliptin/metformin HCl), human papillomavirus, or HPV, vaccine Gardasil and Proquad, and anti-PD-1 cancer drug Keytruda (pembrolizumab).

Januvia and Janumet, type 2 diabetes drugs with the dipeptidyl peptidase-4, or DPP-4, inhibitor approved by the FDA in October 2006 and March 2007, respectively, may be facing competition from new classes of drugs, such as Glucagon-like peptide-1 receptor, or GLP-1, agonists, such as Eli Lilly and Company's (LLY) Trulicity (dulaglutide) and Jardiance (empagliflozin) and other members of a family of medicines called sodium/glucose cotransporter 2, or SGLT-2, inhibitors, like Invokana (canagliflozin) from Johnson & Johnson (JNJ), which have shown to significantly reduce both cardiovascular risk and death. 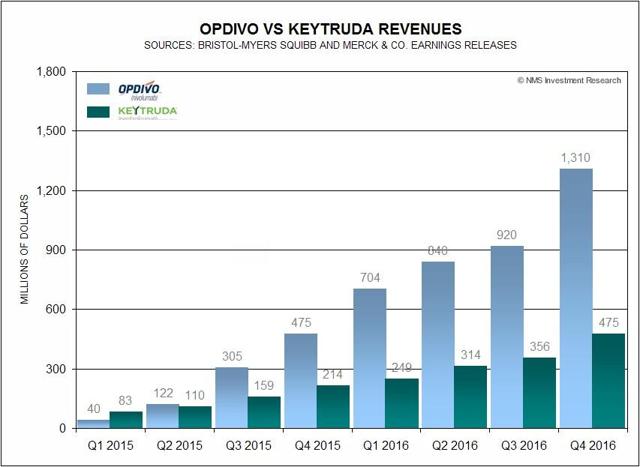 Keytruda, which was approved by the FDA for several types of cancer treatments, including metastatic non-small cell lung cancer or NSCLC, as the first-line treatment of certain patients in October 2016, generated sales of $1.4 billion in 2016, compared to the $3.77 billion from its competitor drug, Bristol-Myers Squibb's (BMY) Opdivo (nivolumab), during the same period. A third anti-PD-L1 cancer immunotherapy drug Tecentriq (atezolizumab) from Genentech, a subsidiary of Roche Holding Ltd. (OTCQX:RHHBY), is far behind as the drug has generated sales of only 180 million Swiss francs (U.S. $178 million) since its U.S. approval in May 2016.

Merck shares are on the rise and breaking out as many analysts believe that Opdivo could lose ground if Merck receives approval for Keytruda in combination with chemotherapy for first-line treatment of metastatic or advanced non-squamous NSCLC with a PDUFA, or target action, date of May 10. In our view, investors might have been rotating out of Bristol-Myers stock into Merck, in anticipation of the FDA nod. Sentiment could shift, meaning sell Merck, P/E ratio TTM of 47.02, and buy Bristol-Myers, P/E ratio TTM of 21.20, as Merck's stock is already very expensive after the recent company revision of its 2016 earnings, while a downside risk exists if the company revises its 2017 outlook downward based on Zepatier sales.

The iShares Nasdaq Biotechnology ETF (IBB), which tracks the total return performance of the Nasdaq Biotechnology Index (NASDAQ:NBI), is up over 23% since it hit a bottom at $239.59 per share in early February 2016. The ETF is about to break out the $300.97 key resistance level, or 38.2% Fibonacci retracement, meaning a possible upside potential of 6% to 12% for IBB's components if the resistance level breaks. 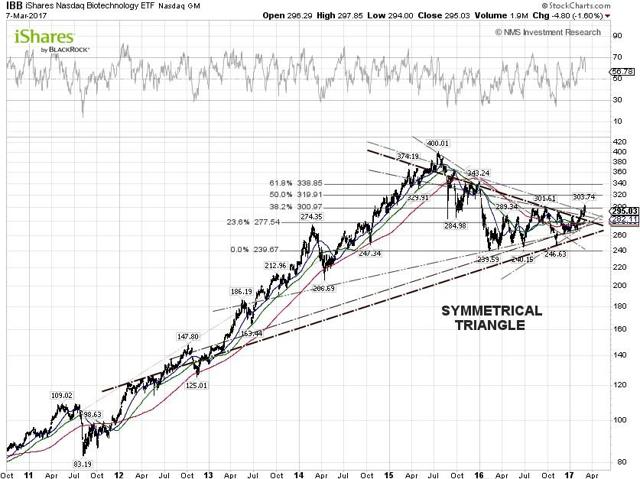 One name that came up in analysts' lists as a potential takeover target by Gilead is Vertex Pharmaceuticals (VRTX). The latest Vertex earnings report was released on January 25, beating Wall Street expectations on robust sales of its cystic fibrosis drug, Orkambi (lumacaftor/ivacaftor). Orkambi, which is the follow-up drug to Kalydeco (ivacaftor) and combines that drug with a new ingredient, lumacaftor, generated full year 2016 revenues of $980 million, up 179% year-over-year. The company continues to expect total 2017 product revenues for Orkambi of $1.1 to $1.3 billion, or a 22.5% increase on a year-over-year basis at the mid-point, while Kalydeco sales are expected to be flat at $700 million at the mid-point.

Shares of Vertex are on the rebound, after plunging almost 50% since hitting an all-time high of $143.45 per share in July 2015. The stock broke out the upper trendline resistance of the bullish descending wedge chart pattern with the objective near-term price target between $98 and $110, meaning upside potential between 7% and 20% from the closing price of $91.32. 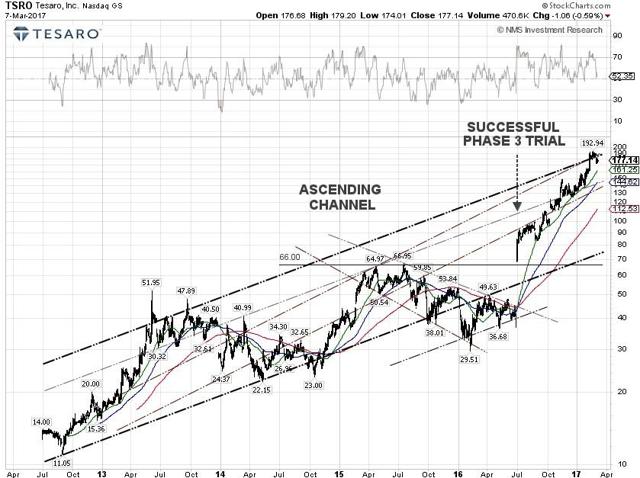 Another top takeover candidate is Tesaro, Inc. (TSRO). According to Reuters, the company has already been discussing its options with investment banks after receiving acquisition interest from several drugmakers. Tesaro's key drug is Niraparib, which targets advanced solid tumors in ovarian and breast cancers. Niraparib is an oral, selective inhibitor of PARP-1 and PARP-2. PARP, or poly (ADP-ribose) polymerase, is a DNA repair protein that restores single strand DNA breaks. By inhibiting PARP, certain cancer cells may be rendered unable to repair DNA damage, which can lead to cell death.

In June 2015, Tesaro announced a collaboration with Merck to study the effects of using Niraparib in combination with Keytruda. Tesaro shares soared about 120% in late June 2016 after the company announced positive phase 3 data for Niraparib for the treatment of ovarian cancer. Tesaro shares are already trading at the top end of the range, but the stock could fetch north of $200 per share in a rumored takeover, according to Credit Suisse and Leerink analysts.

The list of potential takeover targets that have seen a significant drop in market capitalization since summer 2015 include rare-disease drug developers Alexion Pharmaceuticals, Inc. (ALXN) and BioMarin Pharmaceutical Inc. (BMRN), as well as oncology drug developer Incyte Corporation (INCY). The share prices of these companies are up between 20% and 100% from their 52-week lows, and the trend seems to be moving higher along with IBB.

Merck dropped a bombshell in late February, after the company reported in its Form 8-K filing, that it will take billions of dollars in a write-down on its experimental hepatitis C drug MK-3682, uprifosbuvir, and revised its reported fourth-quarter 2016 GAAP EPS, from a profit to a loss. The company said its full-year 2016 GAAP EPS is now down 10%, instead of up 31% on a year-over-year basis, while revenue growth remains flat.

Merck is not the only casualty in the hepatitis C drug price wars, as political pressures from U.S. politicians and the Congress to lower prescription drug prices continue to build. In early February, Gilead Sciences slashed its sales and growth forecasts of its hepatitis drugs by more than 40%, citing lower patient starts, increased competition and shorter duration of treatment.

Merck's investors are making a big bet on cancer drug Keytruda and are willing to pay a premium price for the stock, while sales growth of Zepatier is now in question since the hepatitis C drug market is cracking. Gilead CEO John Milligan and Merck CEO Ken Frazier hinted that they are out shopping for deals that would be good strategic fits for their companies, but did not tell investors when and how they are going do it. Meanwhile, the biotechnology sector continues to rebound and potential acquisition targets become more expensive.

Ed Wijaranakula
524 Followers
W. (Ed) Wijaranakula has been a portfolio manager for over 15 years. He has a Ph.D. in Electronic Materials and has worked with Intel, Taiwan Semiconductor, Texas Instruments, and other tech companies in the Silicon Valley, during his professional career. He was also involved with industry research projects at MIT, NC State and the University of Washington. His investment research expertise includes biotech, commodities and currencies. He has published over 800 articles and holds 14 U.S. and international patents. Tweeter @wijaranakula
Follow

Disclosure: I am/we are long ABBV, AGN, BIIB, IBB. I wrote this article myself, and it expresses my own opinions. I am not receiving compensation for it (other than from Seeking Alpha). I have no business relationship with any company whose stock is mentioned in this article.