There's been an enormous amount of positive news surrounding the U.S. economy as a result of expectations of a Trump administration fiscal stimulus. The U.S. economy has low unemployment, solid job growth, and wage growth has finally perked up.

Equity markets and bond yields are rallying on the expectation of economic growth. Finance experts are telling us on the financial news networks that the economy might overheat, and the Fed has been "behind the curve". According to the experts, the Fed needs to get with it, and hike soon, perhaps three times this year. If the Fed doesn't hike, as I just watched on Bloomberg TV, the U.S. economy might overheat.

So it's obvious, the Fed should hike, right?

Well, here's why the Fed should NOT hike in March, and the next hike shouldn't occur until September, at the earliest.

The markets have been surging on the expectation of growth. And therein lies the problem. The growth side of the equation needs to kick in first before the Fed considers hiking again.

Does it sound like the U.S. economy is overheating? And if equity markets and yields are surging on expectations of growth, might they adjust lower on the expectation of lower Q1 growth?

It's clear that many investors believe the economy will post solid growth in 2017. However, our growth forecasts and expectations of fiscal stimulus should not be the basis for the Fed to decide monetary policy.

What about the Fed mandate of price stability and maximum employment?

It appears the U.S. economy has reached maximum employment, and inflation has been rising, although inflation remains below the Fed's 2% target.

Janet Yellen remarked during her speech in Chicago that a move towards higher rates seems close at hand if inflation picks up since "inflation appears to be still running somewhat below 2 percent. But as that gap closes, "with labor market conditions now in the vicinity of our maximum employment objective." a move may be near. - Janet Yellen speech at The Executive's Club, Chicago.

However, Yellen went on to say that the maximum employment is contingent on growth. "gradual increases in the federal funds rate will likely be appropriate in the months and years ahead: Those increases would keep the economy from significantly overheating, thereby sustaining the expansion and maintaining price stability." - Janet Yellen speech at The Executive's Club, Chicago.

It appears, according to Yellen, that maximum employment and sustaining an economic expansion go hand in hand. While keeping the economy from overheating also appears to be a key factor in normalizing rates.

The question remains, if the Fed wants to sustain the expansion as Yellen stated, is a 2016 1.9% annual growth rate considered expansive by the Fed? Does the Fed believe the economy is overheating?

Or perhaps, the Fed believes the U.S. growth rate will increase substantially in the coming quarters, and now's the time to raise rates, despite a forecasted 1.3% GDP number for the current quarter.

To get a better sense of whether the Fed is hiking too soon, or behind the curve, we need to look to the past and compare U.S. growth rates to Fed hikes.

GDP growth vs. the Fed:

Since 1994, the Fed began substantial tightening of monetary policy four times. The gray areas on the chart represent recessions.

Now let's take a look at U.S. GDP growth during those periods. 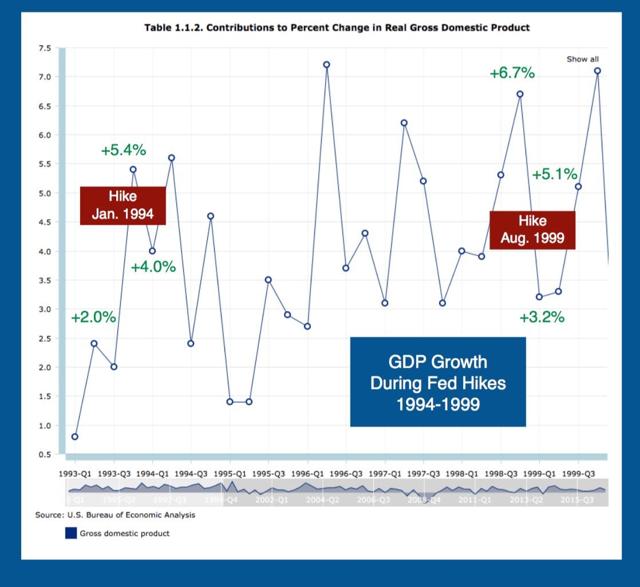 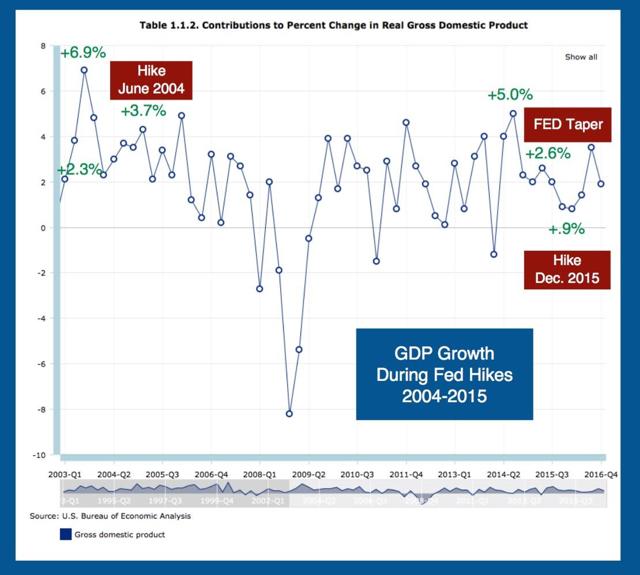 It appears that the Fed's definition of expansion and overheating has dropped considerably over the years. Economic growth was substantially higher in prior periods of Fed hikes (before 2015), with a few outlier exceptions.

The growth rate surrounding a Fed hike is important because the economy has to be able to withstand the increase in rates. Otherwise, the rate increase without significant growth could potentially lead to an economic slowdown.

To see how likely a tighter monetary policy can negatively affect U.S. growth, we look to how the U.S. economy has responded since the Fed taper in 2014.

Impact on U.S. growth since the Fed began its current tightening cycle:

In other words, quarterly growth in the U.S. economy has surpassed 2% only three times since the peak in 2014, following the Fed taper. 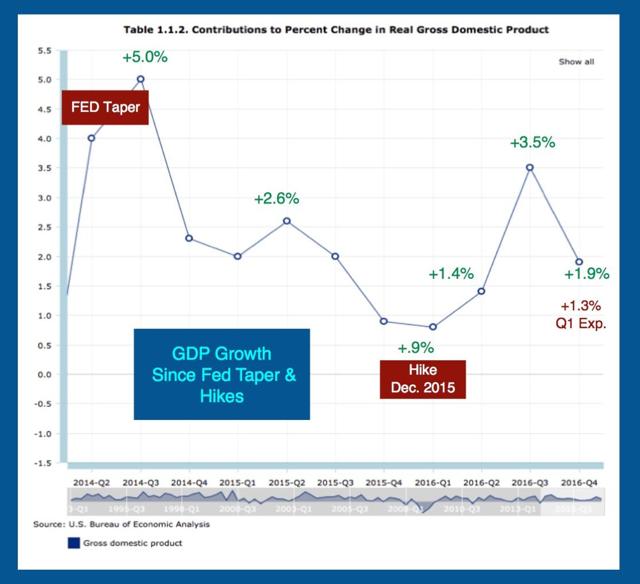 Does this sound like an economy that's so expansive, it's overheating?

Does it make anyone else nervous that a March Fed hike is a forgone conclusion with a 1.9% average growth rate for two years?

Regardless of the Fed's balance sheet, and admittedly the size and scope is massive, the financial markets and U.S. corporations are driven by economic growth first and foremost. Just imagine where growth would be if the Fed started reducing the balance sheet in addition to hiking rates.

Since the current run-up in stocks and bond yields is based on the expectation of growth, at some point the growth must kick in. If the Fed hikes prematurely or too aggressively, we could see GDP stall, and the 10-year yield could retrace significantly.

A premature Fed hike that leads to slower growth would impact investors who are long equity ETFs via the SPDR S&P 500 Trust ETF (SPY), or the U.S. dollar via the PowerShares DB USD Bull ETF (UUP). Also, treasuries would be impacted including the iShares 20+ Year Treasury Bond ETF (TLT), and as a result, those invested in financials like Bank of America Corporation (BAC), and the Financials Select Sector SPDR ETF (XLF) would be the hardest hit if yields were to come down.

Again, I realize the markets are tired of the Fed, and low yields. And it's important that yields rise since banks typically are more profitable during periods with higher yields and thus, lend more capital. However, higher yields need to be accompanied by higher GDP growth. Otherwise, loan demand will slow.

If investors are buying into this market because they believe growth will rise in 2017, and I believe we could easily see a quarter in 2017 with a 3% U.S. growth rate, a Fed hike in March when growth is below 2%, could lead to even slower GDP growth in the near future.

If the Fed is going to hike three times this year, Janet Yellen will need everything to go perfectly for the U.S. economy. Fiscal stimulus and tax cuts would need to get through Congress, geopolitical risks would need to subside, and global growth, particularly in China would need to rise.

If U.S. growth in Q1 and Q2 comes in below 2%, we would need significant growth in Q3 and Q4 to offset the Fed hikes and to finish the year above 2% annual growth.

Please don't get me wrong; I'm positive and confident that growth will pick up in the U.S. economy, and in China's economy as well. I'm also confident that some type of fiscal spending package will get done, or at the very least tax reform leading to lower corporate tax rates.

But if the Fed hikes two or three times this year, and GDP growth doesn't get up to 3% for two-quarters, the Fed may offset the actual Trump stimulus that has largely been priced into the markets. And investors need to be prepared for that scenario.

More articles to follow to keep you updated on the Fed, equities, financials, the dollar, and yields in the coming days and weeks.

And of course, feel free to comment below if you have any questions or send me a private message by clicking the "send a message" link on my profile page.