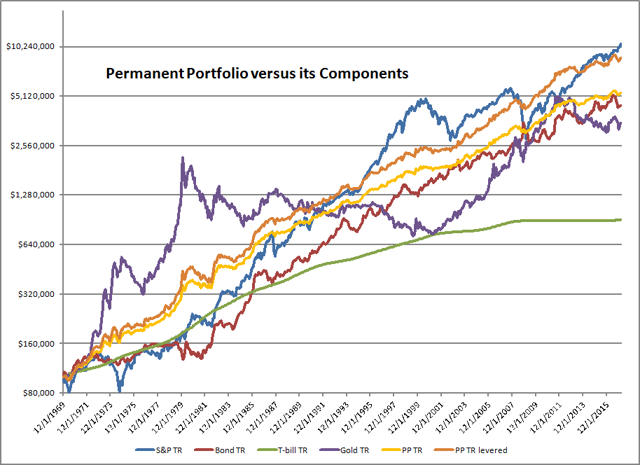 Think about inflation - how do these assets do?

Think about deflation - how do these assets do?

Long bonds and gold are volatile, but they are definitely negatively correlated in the long run. The Permanent Portfolio concept attempts to balance the effects of inflation and deflation, and capture returns from the overshooting that these four asset classes do.

What did I do?

I got the returns data from 12/31/69 to 9/30/2011 on gold, T-bonds, T-bills and stocks. I created a hypothetical portfolio that started with 25% in each, rebalancing to 25% in each whenever an asset got to be more than 27.5% or less than 22.5% of the portfolio. This was the only rebalancing strategy that I tested. I did not do multiple tests and pick the best one, because that would induce more hindsight bias, where I torture the data to make it confess what I want.

I used a 10% band around 25% (22.5-27.5%), figuring that it would rebalance the portfolio with moderate frequency. Over the 566 months of the study, it rebalanced 102 times. At the top of this article is a graphical summary of the results.

The smooth-ish gold line in the middle is the Permanent Portfolio. Frankly, I was surprised at how well it did. It did so well that I decided to ask: What if we drop out the T-bills in order to leverage the idea. It improves the returns by 1%, but kicks up the 12-month drawdown by 7%. Probably not a good trade-off, but pretty amazing that it beats stocks with lower than bond drawdowns. That's the light brown line.

Now the above calculations assume no fees. If you decide to implement it using SPY, TLT, SHY and GLD (or something similar), there will be some modest level of fees and commission costs.

What Could Go Wrong

Now, what could go wrong with an analysis like this? The first point is that the history could be unusual and not be indicative of the future. What was unusual about the period 1970-2017?

Other risks, however unlikely, include:

But if risks this severe happen, almost no investment strategy will be any good. If the US isn't a desirable place to live, what other area of the world would be? And how difficult would it be to transfer assets there?

The Permanent Portfolio strategy is about as promising as any that I have seen for preserving the value of assets through a wide number of macroeconomic scenarios. The volatility is low enough that almost anyone could maintain it. Finally, it's pretty simple. Makes me want to consider what sort of product could be made out of this.

Back to the Present

I delayed on posting this for a while - the original work was done five years ago. In that time, there has been a decent amount of digital ink spilled on the Permanent Portfolio idea of Harry Browne's. I have two pieces written: Permanent Asset Allocation and Can the "Permanent Portfolio" Work Today?

Part of the recent doubt on the concept has come from three sources:

Here's the thing, though - just because it succeeded in the past does not mean it will in the future. There is a decent theory behind the Permanent Portfolio, but can it survive highly priced bonds and stocks? My guess is yes.

It's hard, almost impossible, to make them all do badly at the same time. They react differently to changes in the macroeconomy.

There are a lot of modified permanent portfolio ideas out there, most of which have done worse than the pure strategy. This permanent portfolio strategy would be relatively pure. I'm toying with the idea of a lower minimum ($25,000) separate account that would hold four funds and rebalance as stated above, with fees of 0.2% over the ETF fees. To minimize taxes, high-cost tax lots would be sold first. My question is: Would there be interest for something like this? I would be using a better set of ETFs than the ones that I listed above.

I write this knowing that I was disappointed when I started out with my equity management. Many indicated interest, few carried through. Small accounts and a low fee structure do not add up to a scalable model unless two things happen: 1) enough accounts want it; and 2) all reporting services are provided by Interactive Brokers.

David Merkel, CFA
4.64K Followers
Please note that I do not read comments posted here, nor respond to messages here. I don't have the time. If you want my attention, you must seek it directly at my blog. David J. Merkel, CFA — From 2003-2007, I was a leading commentator at the excellent investment website RealMoney.com (http://www.RealMoney.com). Back in 2003, after several years of correspondence, James Cramer invited me to write for the site, and now I write for RealMoney on equity and bond portfolio management, macroeconomics, derivatives, quantitative strategies, insurance issues, corporate governance, etc. My specialty is looking at the interlinkages in the markets in order to understand individual markets better. I no longer contribute to RealMoney because my work duties have gotten larger, and I began this blog to develop a distinct voice with a wider distribution. In 2008, I became the Chief Economist and Director of Research of Finacorp Securities (http://www.prnewswire.com/cgi-bin/stories.pl?ACCT=109&STORY=/www/story/02-08-2008/0004752449&EDATE=). Finacorp went into liquidation in June 2010, after which I decided to open my own asset management shop, Aleph Investments, LLC. I manage stock and bond portfolios for clients. Until 2007, I was a senior investment analyst at Hovde Capital, responsible for analysis and valuation of investment opportunities for the FIP funds, particularly of companies in the insurance industry. I also managed the internal profit sharing and charitable endowment monies of the firm. Prior to joining Hovde in 2003, I managed corporate bonds for Dwight Asset Management. In 1998, I joined the Mount Washington Investment Group as the Mortgage Bond and Asset Liability manager after working with Provident Mutual, AIG and Pacific Standard Life. My background as a life actuary has given me a different perspective on investing. How do you earn money without taking undue risk? How do you convey ideas about investing while showing a proper level of uncertainty on the likelihood of success? How do the various markets fit together, telling us us a broader story than any single piece? These are the themes that I will deal with in this blog. I hold bachelor’s and master’s degrees from Johns Hopkins University. In my spare time, I take care of our eight children with my wonderful wife Ruth. Visit this site: The Aleph Blog (http://alephblog.com/)