Price action over the prior week

Last week, I suggested that the rally in silver was still looking higher. But, once we completed that next micro-move higher, I expected that we would drop to test the support region on my chart. Thus far, the market has reacted exactly as we suggested last week.

Anecdotal and other sentiment indications

Yes, we all read those headlines, and there were many more just like them. And, I am sure most of you believe that the US attack on Syria certainly "caused" the rally in metals. But, if you remembered from my analysis last week, we were still looking for higher levels to be struck in silver even before a correction took hold. So, I view the Syrian news only as an "excuse" rather than a cause.

Moreover, during the same day, silver went strongly red, and lost over 2% from its intra-day market high. Even gold and GDX retraced the entire move higher the same day. So, what happened? Did we turn back time and not really attack Syria? Did Trump go on the air and say "ooops, we made a mistake and we are sorry?" Did another news event "trump" the Syrian attack? I don't think so.

As I noted last weekend, silver was set up to go higher under all circumstances I was following. But, I then expected a pullback to the support region noted on my chart after silver struck that higher high. Thus far, the market has played out exactly as it should have, with and without any news. And, just because news accompanied the move up does not mean the news caused the move. Rather, it was the catalyst of a move that was set up to be made. I mean, what news "caused" the move down we expected thereafter?

In fact, consider how many "attacks" have been made in the last few years in Crimea, Syria, or many other places in the Middle East, yet gold declined on many of them. Do you remember how often you would be scratching your head over the last 5 years when you would hear about some "attack" in the world followed by a gold decline? Did those attacks "cause" gold's decline?

Now that I bring this up, I am quite certain I will see some responses to this article trying to distinguish between "attacks" which cause a rally versus "attacks" which cause a decline. Personally, I think anyone making such an attempt is simply fooling themselves by trying to rationalize a market move after the fact, when you could not maintain such expectations before the event. This simply proves what Dr. Franklin said centuries ago:

"So convenient a thing is it is to be a reasonable creature, since it enables one to find or to make a reason for everything one has a mind to do."

I am sure some of you are saying to yourselves "but, Avi, it was so clear that gold moved up when the news was announced, so it must have caused the move." My answer to you is that unless you are able to point to such attacks as always leading to gold rallies, then viewing news of an attack as a "cause" for the metals to rally is simply inconsistent and intellectually dishonest, especially when we have seen so many "attacks" resulting in a gold decline over the last five years. Remember, correlation is not the same thing as causation. Would you claim that prior attacks "caused" gold to decline? You would have to in order to remain consistent in your analysis. But, then consider the ramifications of making such a claim.

In fact, consider that the attacks which led to declines occurred during the metals downtrend, while this attack led to a rally during the metals uptrend. So, it is the trend which has dictated the reaction to the news, rather than the substance of the news itself. Again, remember what Elliott said decades ago:

"At best, news is the tardy recognition of forces that have already been at work for some time and is startling only to those unaware of the trend."

Moreover, such trends are driven by the market's mass herding, which is clearly evident since the price reaction has been determined by the prevailing sentiment of the market at the time, as represented by the price trend. And, remember, the current trend was still looking higher, as I presented last weekend in my update on silver, which I then expected to reverse from that higher high. Is that not the way the market reacted, no matter what the news was?

If you remain steadfast in your position that the news caused this rally, then you must ignore years of similar news causing the market to decline. Again, this is an intellectually dishonest perspective, because there is no internal consistency with such a perspective. Rather, the news event acted as a catalyst for the rally, but not the cause. It is the same as looking at the times when gold dropped on similar news. You would not say that prior attacks "caused" gold to drop. It is much more consistent to view news events as catalysts to the market move, whereas the prevailing market sentiment dictates the direction for the move. This explains why the market moves in different directions after similar news events hit the wire.

For those that want a better understanding as to how this is more of a biological response of the herd rather than some form of reaction to the substance of the news, I would highly suggest you read this article entitled "Science is Revealing the Mechanism of the Wave Principle."

There is not much for me to add regarding my analysis from last week. Silver is now testing its support noted last week, as expected. If we hold support and rally to a higher high, the next pullback will likely be rather shallow. However, a failure to hold this support, followed by a break down below 17.70 opens the door to re-test, and potentially even break below the March low. But, I view that drop as the set up for a powerful rally I expect to take us into the summer. 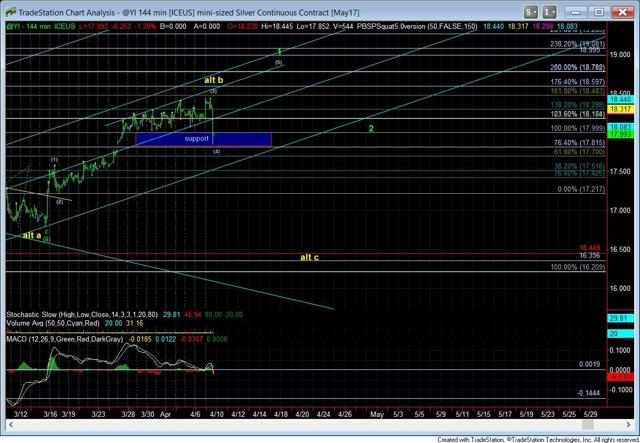 Lastly, it seems that Seeking Alpha has changed the way they tag articles. So, while my articles used to be sent out as an email to those that follow the metals complex, they are now only being sent out to those that have chosen to "follow" me. So, if you would like notification as to when my articles are published, please hit the button at the top to "follow" me, or join me in my Trading Room at Elliottwavetrader.net. Thank you.

Avi Gilburt
69.72K Followers
Author of The Market Pinball Wizard
The #1 Service For Market and Metals Direction!
Avi Gilburt is founder of ElliottWaveTrader.net, a live trading room and member forum focusing on Elliott Wave market analysis with over 6000 members and almost 1000 money manager clients. Avi emphasizes a comprehensive reading of charts and wave counts that is free of personal bias or predisposition.

Disclosure: I am/we are long PHYSICAL METALS AND VARIOUS MINING STOCKS. I wrote this article myself, and it expresses my own opinions. I am not receiving compensation for it (other than from Seeking Alpha). I have no business relationship with any company whose stock is mentioned in this article.

Additional disclosure: I have intermediate term hedges on my portfolio