The long-term view of silver is extremely bullish, given that it is one of the most undervalued metals today. It is evident that ideal economic conditions are present for silver prices to rise for many years to come:

Furthermore, it appears to be the first time that these ideal economic conditions for a rise in silver prices align in such a timely manner; in particular, the bottom in interest rates, the peak in stock markets, as well as the coming collapse of the monetary system. Potentially, all of these events can happen within a two- to three-year period.

It was after the last of these events - the bottom in interest rates (or the peak in government bonds) in 1941 - that silver prices really took off and kept on rising for many years.

Currently, with the more concentrated occurrence of these events possible, we are likely to see a more explosive rise in the price of silver once all of these events have occurred.

Below is a long-term chart of silver which shows the bullish outlook: 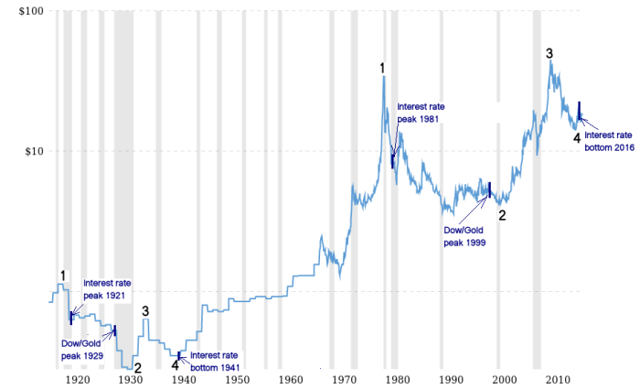 On the chart, I have marked two fractals (1-4) to show how the period from 1921 to 1941 is similar to 1980 to 2016 for the silver market. The two fractals exist in similar conditions relative to interest rate peaks and bottoms, as well the Dow/Gold ratio peaks.

However, as explained above, it is likely that we could end up having a more concentrated occurrence of events that are silver price positive, if the stock market peaks this year (which might have happened already) and if we also have a major US dollar collapse this year or next year.

On the chart, we appear to be around point 4 - the point where silver prices and interest rates are likely to rise significantly. Extreme monetary distress and a stock market collapse will add the explosive effect, causing silver to rise much higher and faster than it did from 1941 to 1980.