Centene Corporation (NYSE:CNC) is registered in each of the states in which it conducts business as an insurance holding company, which places the company under the jurisdiction of state insurance departments. CNC offers a diversified portfolio of products and services to government sponsored programs, particularly Medicare and Medicaid, that target the nation's underinsured and uninsured citizens. The specialty further places the company under the regulatory auspices of the Centers of Medicare and Medicaid Services (CMMS). The company provides these services through member-focused, locally based staff that coordinates care, referrals to related health and social services, outreach and educational forums that assist members in accessing both the quality and appropriateness of available healthcare services.

Managed care provides the lion's share of the Company's revenue stream, about 92% through the end of 2016. Medicaid was established in 1965 under Title XIX of the Social Security Act (1935) to provide health insurance and services to both low income families and to those individuals with disabilities. Funding for the program is largely a 50%-50% state-federal funding exercise that allows each state to set up its own eligibility standards, benefit packages, payment arrangements and administration-all under federal guidelines administered by CMMS. There are 56 programs across the country that includes all fifty states, the District of Columbia and all US territories. Medicaid managed care programs have long been the program of choice to manage both the delivery and quality of care as well as the containment of cost at the state and local level. The Company's managed care segment provides coverage to individuals through Medicaid and through state programs including the Children's Health Insurance Program (CHIP) created under the Balanced Budget Act (1997), long term care (LTC), foster care, dual eligible individuals (DUAL) that qualify under both Medicare and Medicaid guidelines, the supplemental Security Income Program also known as the Aged, Blind or Disabled program (ABD), Medicare and Health Insurance Marketplace.

A very strategic purchase in March of 2016 CNC brought Health.net, whose operations in California brought the potential of tapping the state's 12-million-member strong market into the fold. The Health.net purchase also brought ongoing programs in Arizona, Oregon and Washington under the CNC operational umbrella. The enhanced financial impact of the purchase will be realized during the course of 2017.

Specialty services comprise the remaining 8% of revenue accrued through the end of 2016. The segments include health product and service offerings to state correctional facilities (Florida, New Mexico, Massachusetts, Mississippi, Minnesota, Tennessee and Vermont), healthcare organizations in both the public and private sectors. Government contracts include the Department of Defense TRICARE and Military Family and Life Counseling (MFLC) as well as the Patient Centered Community Care (PC3) program through the Veterans Administration.

CNC's revenue generally comes through a fixed premium per member per month, which makes member count an important financial measure. In 2015, CNC's active member count stood at 5.1 million. Largely as a result of the Health.net acquisition in 2016, that count shot up to 11.4 million, an increase of 124% year-over-year (YOY). Revenue blazed a similar path, soaring from $22.8 billion to $40.6 billion for a 76% increase, YOY. Ditto with diluted earnings-per-share which went from a post of 2.89% through the end of 2015 to 3.41% through the end of 2016.

Two other important measures of consequence include the health benefit ratio (HBR) and the selling, general and administrative (SG&A). The HBR is a measure of medical costs as a percentage of premium revenues. If minimum HBR levels are breached, the funding organization reserves the right to claw back premiums and fees paid to a contractor. CNC's HBR number for 2006 slipped back to 86.5% after posting 88.9% in 2015, largely due to assuming Health.net operations. Similarly, CNC's SG&A cost factor cannot go up beyond a certain point lest it fall out of compliance with contractual ceilings on administrative costs as a proportion of delivered services. CNC's SG&A jumped in 2016 YOY to 9.34% compared with an 8.2% post in 2015, again in response to the absorption of Health.net's operational expenses. Both ratios are projected to drop through the course of the year. 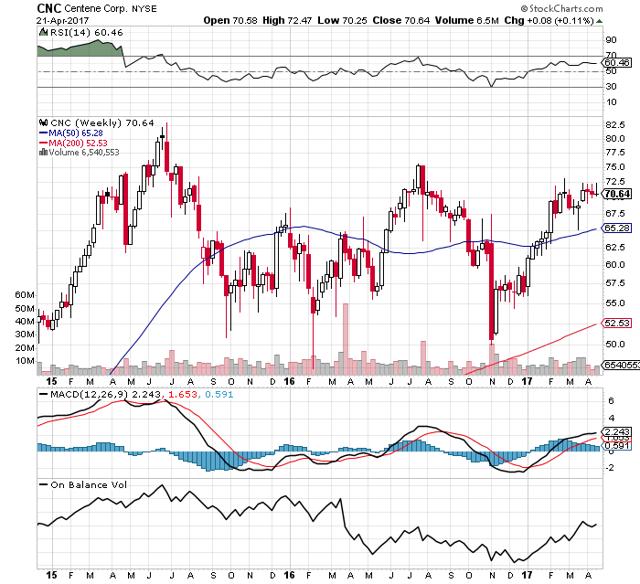 After spending roughly 10-months beneath its 50-day moving average of $65.28, CNC finally broke out in June of 2016, just three months after the completion of the Health.net purchase. The stock would hit its 52-week high of $75.57 in the latter part of July. In the macro-world, the yield on the 10-year treasury note hit a post-WWII low of 1.316% in the first week of July. In the political world, the presidential electoral cycle was in full swing with the nominations of Donald J. Trump and Hillary R. Clinton in their respective national conventions in early and the latter part of the month. The Republican call for the repeal of the Affordable Healthcare Act (ACA) produced a pounding drumbeat throughout the campaign just as it had done in the past three electoral cycles with no less intensity. CNC's exposure to the wrong side of this argument produced 21% stock slide from its July high to its 3 November post of $60. With national polls at this late stage still pointing to a Clinton victory, the stock staged a small rally to election day, only to crash through its 50-day moving average for a 24% drop by the 11th of November in the wake of Mr. Trump's surprise electoral win. The stock would spend just over 2-months beneath its 50-day moving average before breaking out in the first week of January, as it became clear that ACA's replacement the American Health Care Act (ACHA) was not going to command enough votes to get to the House floor for a vote. CNC would reach a high of $72.42 by the 1st of March only to pull back to $65.31 on the 23rd of March, the day before AHCA was pulled from consideration.

The heuristic value of the above exercise demonstrates the close correlation of the stock with the ebb and flow of government healthcare policy. This close correlation will continue as national policy sorts out and defines the parameters of healthcare delivery. The drumbeat of repeal of ACA, as we now know, was not nearly as monolithic as the past seven years have led most to believe. The unceremonious withdraw of AHCA from House consideration was due largely to the Congressional Budget Office (CBO)'s projection of 14-million Americans either giving up or losing their healthcare coverage and another 24-million Americans losing their insurance coverage over the next decade. The political lesson learned from the AHCA demise is telling: there are 12-House Democrats representing districts won by Donald Trump in November. On the other side of the aisle, there are 23-House Republicans in similar political straits representing districts won by Hillary Clinton. These are swing districts, decided by less than 2% of the vote in either direction. A vote to disenfranchise 24 million people from the healthcare insurance roles over the next 10-years is clearly politically untenable. It is no coincidence that CNC broke out of its 50-day moving average on the 24th of March-the very day AHCA was pulled from consideration. CNC's MACD and OBV lines have been signaling strong and positive investor momentum. The stock's relative strength index still signals buy (see Figure 1, above). CNC will maintain its current strong position in delivering products and services over the last mile of any Medicaid proposal short of a single-pay, Medicare for everyone, regime coming out of Congress as a replacement for ACA at the local level.

Disclosure: I am/we are long CNC. I wrote this article myself, and it expresses my own opinions. I am not receiving compensation for it (other than from Seeking Alpha). I have no business relationship with any company whose stock is mentioned in this article.