One indication of just how messed up and flawed the global markets have become is reflected in the way central banks across the world are now buying stocks. This has become a part of their response to correcting the forces of past excesses. Their incursion into this bastion of the free markets signals we have entered the era where true price discovery no longer exists. The central banks are often viewed as price-insensitive buyers, so this incestuous influx of money is in some ways the ultimate distortion. This is especially true when the markets are not deep enough to accommodate the size of these purchases. Over the years, global currency reserves have grown and this has increased pressure on central-bank managers to diversify them, moving from being a liquidity manager to focusing on investment management but with this comes risk.

A recent article in the Wall Street Journal details the reason behind why central banks are buying stocks. There are several forces driving this. Part of it is a hunt for higher returns, because of negative rates, nearly $11 trillion or roughly one-quarter, of global fixed-income assets yielded below zero at the end of 2016, according to Bank of America Merrill Lynch. This means some are investing a bigger share of their growing foreign-exchange reserves in equities, corporate bonds, and other riskier assets while others are doing so merely to prop up their stock market in an effort to create a wealth effect, hoping it will cause consumers to feel better and go out and spend which will propel the economy forward. This should not be confused with buying foreign currencies or with quantitative easing programs, under which central banks like the Federal Reserve have already bought trillions of dollars' worth of assets to boost growth and inflation. 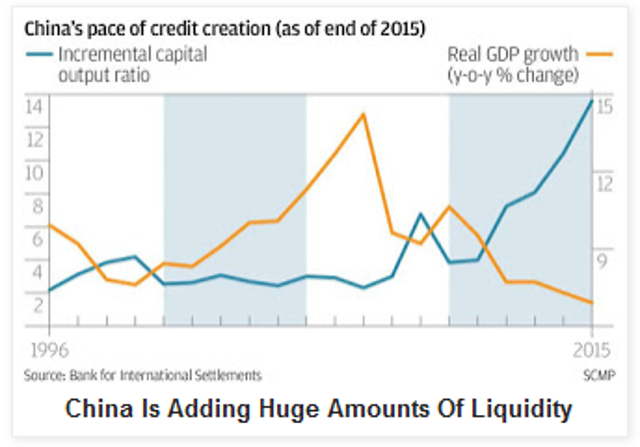 While the QE programs of the European Central Bank, Bank of England and Bank of Japan have been involved in buying riskier assets each with the currency that they themselves print, this is taking things to a new level. One thing I found telling is a statement in the article that many central banks are hiring outside managers to handle the nontraditional assets in their portfolios. It went on to claim this presented an opportunity to a financial industry struggling with stagnant revenue growth, but this is not the job of central banks. I find this frightening because the stock market and the financial sector have already far outperformed Main Street. All this feeds into speculation or can even be interpreted as a confirmation the stock markets are indeed rigged and that any fall is merely a signal for them to rush in and buy more. Doing so accomplishes two things, it bolsters and supports current holdings while reinforcing the image markets are climbing higher because our economic future is getting brighter. All this comes at a price and leaves many economy watchers wondering where this leads. This was apparent in a comment made by a reader on another site who looked ahead and questioned the end game of this intervention. When the central banks own all or a majority of stocks, will they begin to appoint new management working under their control? 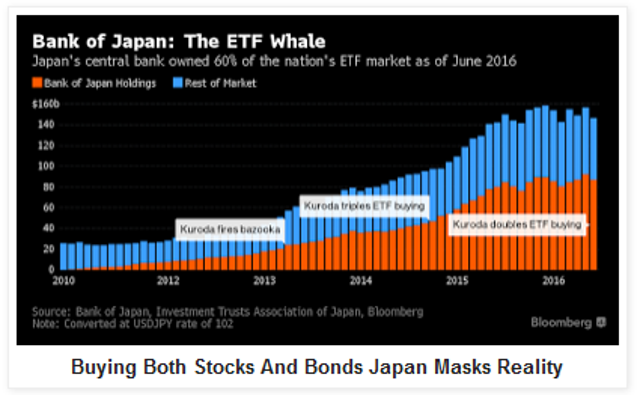 One thing is clear, the central bank's large foray into stock ownership represents more than just a moral hazard and in many ways, it paves the way for a liquidity crisis in our future. Much like the negative interest rates of recent years this action takes us further down the path towards a "liquidity trap," a term that can be baffling and difficult to understand. This term has been used by Allen Greenspan and a few others, it represents a huge problem for the economy. It can have several components, but sooner or later all of them feedback into a loop that disrupts the flow of credit and impacts the real economy.

The tip of the spear may turn out to be the currency markets where each day trillions of dollars slosh back and forth, as traders fight for even a fractional move in their favor. Considering how destabilizing currency swings can be it is easy to see how they could obliterate the global economy. We must remember officials in less-developed nations where large currency reserves sit often use the printing press to buy foreign assets and at the same time cheapen their currency. Some developed central banks such as the Swiss National Bank often accumulate foreign reserves precisely because they want to keep their currency from getting too strong, which would harm exporters and weaken prices. This helps support my theory that for some time the big central bankers are busy manipulating currencies so they trade in a narrow range that will not rock the boat.

Over the years, the central banks appear to have taken turns in rolling out injections into their economies and each time their actions have spilled across porous financial borders carrying markets in one direction or another. This continues to desensitize markets to reality. This creation of stimulus in one form or other by major central banks is their answer to correcting past excesses; simply put, they still are struggling to deflate credit bubbles they allowed to form in the past. Japan is viewed by many as trapped in such a situation following a massive credit bubble in the early 1990s they have attempted time and time again to shake off, a hangover that has manifested itself in deflation and slow growth. By not addressing the real cause Japan's government and the BOJ now find they are forced to buy both bonds and stocks at an alarming rate just to reassure the Japanese people all is well.

Today, China by all measurements is facing the mother of all credit bubbles and addressing it with the same failed policies we have seen before. This is where I point out any false market can be viewed as a bubble that cannot survive. Simply put, at some point the return on loaning money to banks, governments, and others is simply not worth the risk! Bastardizing the stock market so that it no longer reflects true price discovery will eventually mean investors will begin to perceive it as just another false scheme that is held together only by promises made by a government they can no longer trust. Why do you want to invest or loan money if most likely you will never be repaid or repaid with something that is totally worthless? When this happens the only safe place to store wealth will be in "tangible assets" and the central banks will be left printing fiat money that nobody wants.

Bruce Wilds
844 Followers
Bruce Wilds is an independent businessman and licensed general contractor that owns real estate in the Midwest, his holdings include apartments, retail space, and office complexes. He has invested in several businesses and traded both commodities and stocks for several decades. Wilds considers himself well anchored to reality and the economy as he maintains, designs, and leases buildings. His work has made him keenly aware of rapidly changing lifestyles and trends in new business formation. The not for profit blog he maintains incorporates many of the experiences and knowledge garnered from his hands-on business style, extensive travels, and studies of history, politics and economics. Bruce Wilds is also the author of the book "Advancing Time", the book focuses on how the ever quickening pace of change impacts today’s society and the massive challenges it creates. He feels that it is crucial we understand that we are living in a unique era the likes never before experienced by past generations. History viewed in the framework of mans time on earth forms the crux of this somewhat radical perspective. Journeys from the beginning of man to our current state helps us make sense of our fast changing chaotic world. Advancing Time illuminates the responsibilities society faces. Used as a tool Wilds wrote it with the hope it would help clarifies the choices before mankind, guiding and giving hope to those who want to have a positive impact.
Follow
14 Comments
To ensure this doesn’t happen in the future, please enable Javascript and cookies in your browser.
Is this happening to you frequently? Please report it on our feedback forum.
If you have an ad-blocker enabled you may be blocked from proceeding. Please disable your ad-blocker and refresh.