MercadoLibre (NASDAQ:MELI) is one of the largest online commerce ecosystems in Latin America. MercadoLibre's platform is designed to provide users with a complete portfolio of services to facilitate commercial transactions. They are a market leader in e-commerce in Argentina, Brazil, Chile, Colombia, Costa Rica, Ecuador, Mexico, Peru, Uruguay, and Venezuela, based on number of unique visitors and page views

MercadoLibre also operates online commerce platforms in the Dominican Republic, Honduras, Nicaragua, El Salvador, Panama, Bolivia, Guatemala, Paraguay, and Portugal. Through their platform, they provide buyers and sellers with a robust environment that fosters the development of a large e-commerce community in Latin America, a region with a population of over 610 million people and with one of the fastest-growing Internet penetration rates in the world. MercadoLibre offers technological and commercial solutions that address the distinctive cultural and geographic challenges of operating an online commerce platform in Latin America. Their services consist of six integrated e-commerce services: the MercadoLibre Marketplace, the MercadoLibre Classifieds Service, the MercadoPago Payments Solution, the MercadoLire Advertising Program, the Mercado Shops Online Webstores Solution and the MercadoEnvios Shipping Service. 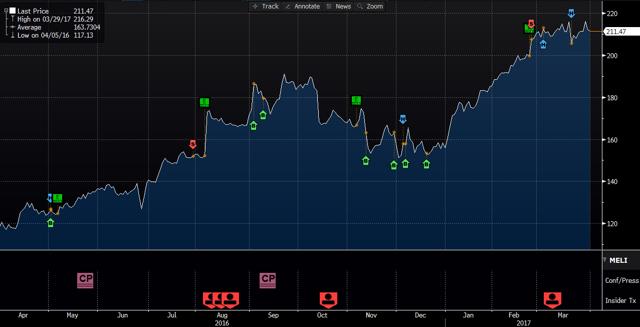 MercadoLibre is at the forefront of an early stage e-commerce market that has not developed as fast as Asian and U.S. e-commerce markets. MercadoLibre is the leader in e-commerce in Latin America where they provide their services to the whole region. Their developed payment services and logistics service will continue to add to their growing business as they are focused on enhancing the market place and customer experience. MercadoLibre continues to grow year over year in users. Gross merchandise value has also continued to grow. Projected growth for e-retail looks favorable - expect MercadoLibre to capitalize on this. MercadoLibre is also expanding MercadoPago services to all users of their marketplace, but also to non-marketplace users, which will help the company with continued growth.

E-commerce is at an early stage in Latin America, and will continue to develop. Latin America sales account for 4.3% of global e-commerce sales.

Growth in e-commerce sales is expected to reach $80B by year 2019 in Latin America as stated by eMarketer.

MercadoLibre has the potential to increase its user base further as there are approximately 360 million internet users in the Latin American region. MercadoLibre has a user base of around 179 million as of 2016.

MercadoLibre seeks to serve people in Latin America by offering diverse e-commerce services. These services provide users with online commerce tools that foster entrepreneurship and social mobility, with the goal of creating significant value for stockholders.

MercadoLibre serves buyers by giving them access to a broad and affordable variety of products and services, a selection that is believed to be larger than otherwise available to them via other online and offline sources serving Latin American markets. MercadoLibre believes they serve sellers by giving them access to a larger and more geographically diverse user base. They do this at a lower overall cost and investment than offline venues serving Latin American markets. MercadoLibre also provides payment settlement services to facilitate such transactions and advertising solutions to promote them.

More broadly, they strive to make inefficient markets more efficient and in that process generate value for stockholders. This business model has proven to be fruitful. Their business model has catapulted MercadoLibre to grow within all of their segments of operation. Below is a graph displaying the percentage growth of MercadoLibre segments as a percentage of net revenues in comparison to the previous year. 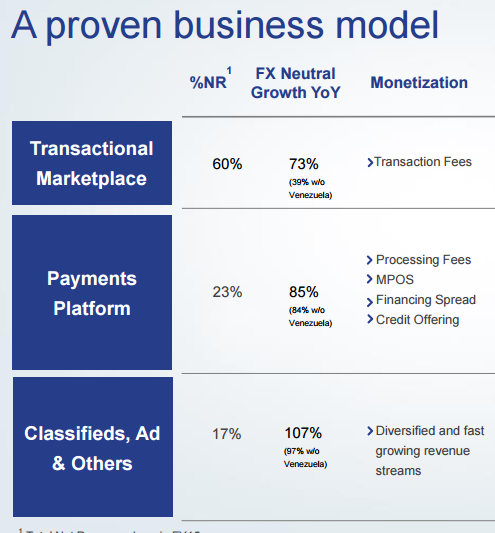 MercadoLibre had over 174.2 million registered users as of the end of quarter four in comparison to the previous quarter. The population in Latin America is estimated at around 627 million people and out of these 360 million are internet users as stated in their 10-K for the fiscal year ending December 31,2016.

The e-commerce industry in the region is still less developed than in the U.S., Europe, or Asia. And most Latin American countries are significantly underpenetrated. Over the long term, a rising middle class and a growing e-commerce industry in Latin America should provide MercadoLibre with substantial growth opportunities. Thus, by looking at chart 2 provided by MercadoLibre below, it's evident that the countries in which Mercado operates (highlighted in yellow) have a small penetrated market of total retail. This shows that e-commerce in these Latin American countries are small in equivalency to other countries that have a higher penetration of their e-commerce market within their retail markets. 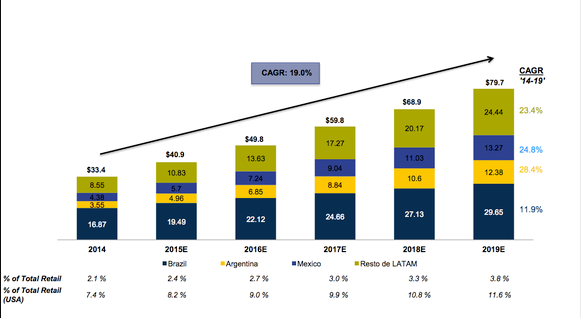 MercadoLibre's main markets are Brazil, Argentina, Mexico, and Venezuela. As of late, Latin America economies are going through significant volatility. Brazil has experienced sluggish economic growth and rising inflation levels over the past several years. In Argentina, inflation is up while GDP has contracted and the situation in Venezuela is discouraging from an economic and political perspective.

MercadoLibre generates revenues in local currencies and it reports financial performance in U.S. dollars. Fluctuating exchange rates can have a considerable impact on financials. It's important to also consider new economic policies in the U.S. under the Trump Administration that could hurt Latin American currencies. This will materially drag on MercadoLibre performance.

Looking at key operational metrics such as sold items and payment transactions will offer better outlays of monitoring performance. Leaving macroeconomic considerations aside, MercadoLibre is clearly firing on all cylinders.

As stated in MercadoLibre's annual 10-K report ended December 31, 2016. Items sold on the platform reached 51.6 million units during the fourth quarter of 2016, growing by 40.2% versus the same quarter in the prior year. Items sold in Brazil and Mexico increased to 62% and 47% YoY, both countries reaching multi-year highs. Gross merchandise volume was $2.2 billion, growing by 10.8% in U.S. dollars on a YoY basis and 48.3% YoY in local currencies. MercadoLibre's payment business, Mercado Pago, is also providing substantial growth. MercadoLibre processed 42.5 million transactions in the fourth quarter, growing 67% in comparison to the same quarter in the previous year. The total payment volume was $2.4 billion, a 57.5% increase YoY in U.S. dollars and 84% YoY growth in local currencies.

This growth is attributed to the successful commercial efforts in onboarding large clients, increased cross border payments, successful open platform integrations and increasing payment volume form mobile point of sales solutions in Brazil. MercadoPago on platform penetration rose to 77.8% in the fourth quarter. Penetration beyond Brazil continues to increase because of improved transactions quality and is reflected in increased frequency on the platform.

The positive operational metrics performance has been effectively translated into growing sales and earnings for investors, reported in MercadoLibre's annual 10-K report which ended December 31, 2016. Net revenues for the year 2016 were $844.4 million, which is a 29.6% increase in USD YoY. This was due to increases in the number of items sold and gross merchandise volume through the MercadoLibre segment and the Mercado Pago segment also helped with the increased net revenues. There were higher total payment transactions as well as total payment volume.

MercadoLibre is keen on continuing their growth with these segments as they are looking to further implementing their Mercado Pago services beyond marketplace platforms. Its expected revenues for MercadoLibre will grow $1.168 billion in 2017 and $1.487 billion in 2018 as seen in Chart 1, provided by Bloomberg. This adds to MercadoLibre's compelling future growth. MercadoLibre could see further growth as retail e-commerce sales are expected to grow in Latin America as seen in Chart 2, provided by eMarketer.

For the fourth quarter, net revenues continued to see an increase for the third consecutive quarter to $256 million, up 41.8% in USD and 68% in local currencies, as seen in chart 3. 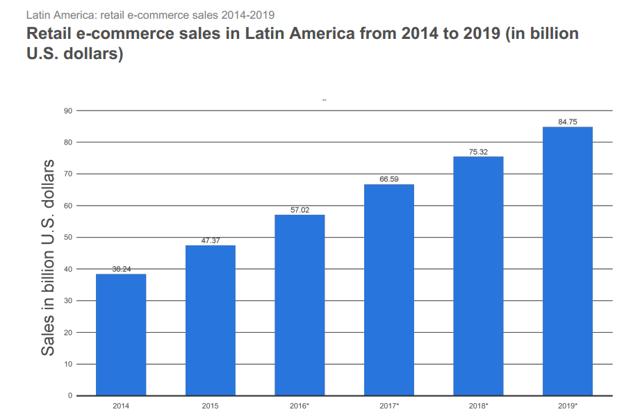 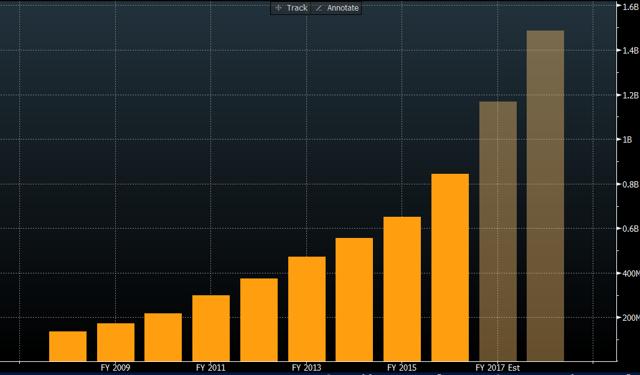 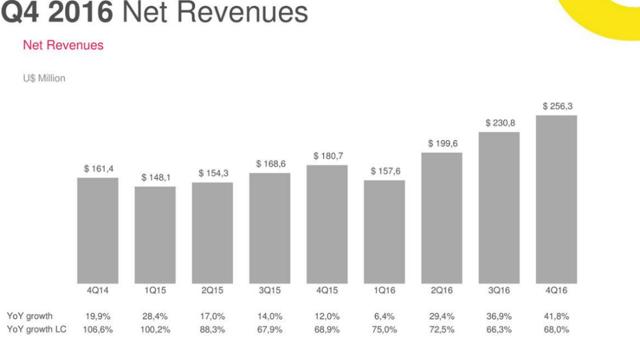 Profit Margins have been enduring some pressure in between quarters, as reported in MercadoLibre's annual 10-K report ended December 31, 2016. Fourth quarter gross profits decreased from 65.1% in Q4 2015 to 63.58% Q4 2016. However gross profit continues to grow YoY in Q4. EBIT has continued to see growth for Q4 YoY. EBIT margin has also seen an increased growth from Q4 2015.

The decrease in gross profit margin is due to higher sales tax that has increased because of adaptation of financing, credit and shipping service investments in hosting, as well as costs related to the sale of Mobile Point of Sale payment devices.

This compression in margins is due to the stated factors but have allowed for MercadoLibre to have sustained annual profitability. As reported in MercadoLibre's annual 10-K report ended December 31, 2016. Gross profit for the 2016 was $536.858 million which is an increase from 2015 which saw gross profits of $436.79 million. Gross profits are expected to grow to $924.57 million in 2018 as seen in Chart 2. Gross Profit margin for the year has decreased to 63.58% from 67.01% in 2015. Again this is due the investment in key initiatives. This shows MercadoLibre is still retaining 63.58% of revenues as gross profit. EBIT margin for the year 2016 was 21.44% as compared to 21.36% meaning MercadoLibre has done a slightly better job at retaining sales in terms of earnings before interest and taxes. EBIT margins are expected to grow to 22.62% by 2018.

MercadoLibre has supported its continued investment in key initiatives that have driven them to success. There will be continued investing towards payment solutions (MercadoPago) both on and offline as well as logistics (MercadoEnvios) for fulfillment and free subsidized shipping, expanding credit offerings, and continued focus on customer service and experience within the market place. This was stated in MercadoLibre's annual 10-K report which ended December 31, 2016. 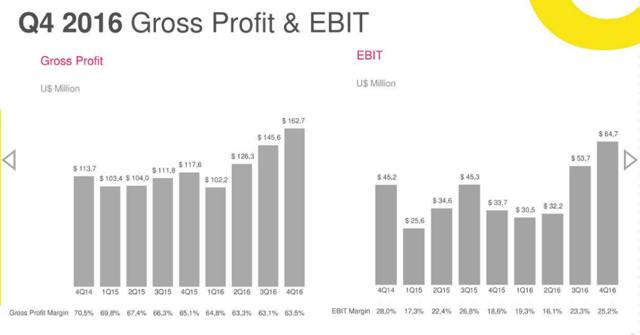 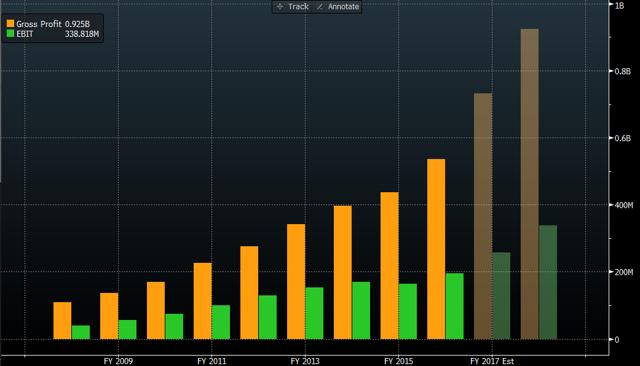 When looking at other successful e-commerce giants in terms of expected revenue and market capitalization, MercadoLibre is a small player against Amazon (NASDAQ:AMZN), eBay (NASDAQ:EBAY), and Alibaba (NYSE:BABA). The main idea is clear, MercadoLibre still has substantial growing to do before it can even compare to the size of its larger rivals. The table provided below can show investors the outlook MercadoLibre could have if they continue revolutionizing e-commerce in a growing Latin American market.

MercadoLibre is the market leader within an unpenetrated e-commerce market. The rapid continued growth and financial indicators such as sales and profits have shown it to be moving in the right direction. For investors who have a long-term approach to growth investing, there is a huge upside potential to be made with an Investment in MercadoLibre as it is a company that will only continue to grow.