There's a currently hated stock market that's still performed better than the US over the past couple of decades. Right now, it's dirt cheap and has a high and rising dividend yield. Despite this, practically every investor detests it, usually based on false perceptions. That market is Russia.

I know… I know… About 99% of you have been told endlessly since birth that Russia is evil. Russian business is inefficient. Russia is a failed state run by a dictator.

But bear with me on this one. I also grew up immersed in cold war propaganda, and continue to see the very poor coverage of Russia that continues to this day. But when it comes to investing, it pays to keep an open mind.

If all of the negativity was true, then you'd think that Russian stocks would have been a dreadful place to invest. But actually they've done very well over the long run, admittedly with some pretty hairy volatility at times.

They've also done well in the shorter run. The last time I wrote about Russia was in August last year (see here). It was an update on a previous recommendation to buy Russia dating back to March 2015. It was already up 21% over 17 months. Dial forward another seven months and the total profit is 33.5%, including dividends, over a tad more than two years. But I think there's a lot more to come.

Now I'm not naively saying that Vladimir Putin is some kind of angel. For starters, he's a politician. But there certainly has been an economic transformation of Russia while Putin has been in power, and it's not over yet. That transformation shows up in the performance of the Russian stocks.

The following chart compares the MSCI Russia index with the MSCI USA index and the MSCI Emerging Markets index since December 1994. That's the earliest available date for the Russian index. Don't forget, the Soviet Union was only officially dissolved on 26th December 1991. The modern Russian stock markets were launched shortly afterwards. 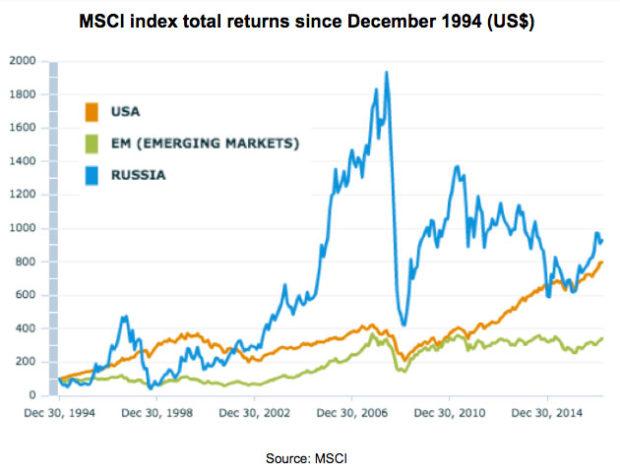 Clearly, it hasn't all been plain sailing, even if the long-term trend has been strongly upwards. Price swings can be extreme, not least because a lot of investors in Russia aren't from Russia. This leaves the market prone to the vagaries of hot and cold sentiment and subject to fickle foreign fund flows.

There was a big crash in 1997/1998, which was when Russia devalued the ruble and defaulted on its government debts. The much admired but ultimately deeply flawed US hedge fund known as "Long Term Capital Management" was one of the victims of the bond market turmoil (somewhat ironically, given LTCM's hubristic name…). But Russian stocks crashed too.

The other big crash was in 2008, during the global financial crisis, when leveraged or panicked investors dumped just about anything seen as remotely risky. Commodity prices collapsed, so did the ruble, and so...unsurprisingly...did Russian stocks, especially when measured in dollars.

The recovery was speedy and made a lot of money for anyone prepared to buy Russian stocks in early 2009. If such a rare creature existed, then they more than tripled their investment by early 2011.

But then began a multi-year bear market which lasted until early 2016. It not only just saw valuation multiples pushed lower and lower, but also saw the ruble bashed down for a while. There were essentially two main reasons for this.

First, commodity prices were weak, and Russia is a big commodity producer. In particular, the price of oil collapsed. Brent crude fell from above $120 per barrel in early 2011 to well under $40 in early 2016.

Second, there was that whole business in Ukraine. But that all seems to have mostly calmed down now. There are still sanctions in place which helped tip Russia into a modest recession. But it's already been growing again in the last six months.

In the meantime, Russian stocks surged last year. Investors in the MSCI Russia index made 56% during 2016, measured in dollars and including dividends. A big chunk of that came from a rebound in the ruble, which was up 20% against the dollar. But the rest was just good old stock market price gains and dividends.

Of course part of it, at least at the end of the year, was because people thought newly-elected Donald Trump would be much friendlier towards Russia than the alternative, Mrs. Clinton. But the recent business in Syria makes it clear that Trump is no longer Putin's buddy.

But none of that matters. Well… possibly it does. Some people seem to think we're on the verge of World War III.

If that's the case, then you should make sure you own plenty of gold. But, even if you do, if there actually is an imminent global conflagration - with the US and its allies pitched against Russia, China and their allies - you'll have bigger things to worry about than your investment portfolio.

In the meantime, and whilst not irradiated, I'll stick to looking for the rare bargains in a bubbly world. That often means hunting out things that people love to hate. And Russia fits the bill perfectly.

Just look at this table that compares Russian stocks with the US: 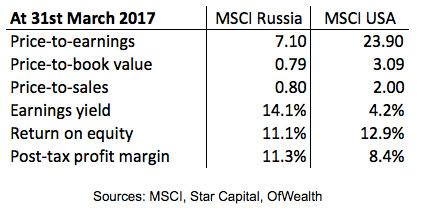 Many would reflexively state that this is because Russian companies are inefficient and don't make decent profits. Or that Russia is a "value trap", meaning the data is misleading and the whole thing is about to fail. But they'd be wrong.

Whereas individual companies can be value traps - on the edge of obsolescence - whole country stock markets rarely are. These days - as regular readers know - I live in Argentina, a country that's seen its fair share of economic chaos. Yet its (tiny) stock market has actually performed pretty well over time. Of course, there's the odd Venezuela or Zimbabwe about, but Russia is very far from being one of those.

For a start, Russian government debt is less than 18% of GDP. That's a level that most countries can only dream of these days, and it's got big foreign exchange reserves too. But let's get back to those stocks.

Profitable and with a fat yield

Russian return on equity is 11.1%, meaning the companies make a decent return on capital. Although, admittedly, inflation is running around 4% versus the USA's inflation rate of 2.4% (CPI-U).

On the other hand, Russian post-tax profit margin is 11.3%, well above the USA's 8.4%. Clearly, there are differences between the two stock markets - not least a very different business mix. But it's plain wrong to say Russian companies are not profitable.

What about dividends? (No need to worry about buybacks). The dividend yield is 4.6% and likely to rise further. Currently Russian companies - private or state controlled - pay out 33% of profits as dividends.

In 2012, the government said that state-owned enterprises (SOEs) must pay out a minimum of 25% of profits as dividends. Then, in 2016, it raised this to 50%, calculated on the higher of accounting profits under International Financial Reporting Standards (IFRS) or Russian Accounting Standards (RAS).

Some big SOEs like Gazprom (OTCPK:GZPFY) and Rosneft (OTC:RNFTF) still resist, saying they need the funds for capital expenditure. But this chart shows that the trend is clearly upwards: 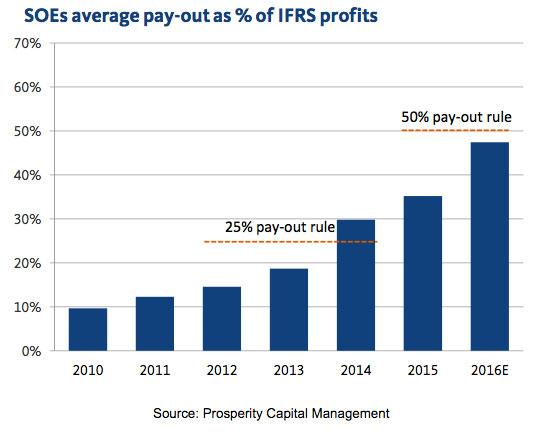 Private companies are also increasing their payouts. For example Sberbank (OTCPK:SBRCY), a successful private bank, recently increased its payout ratio from 20% to 25%.

I know that the vast majority of people reading this are likely to be highly sceptical about Russian stocks. And that's precisely why they're so interesting for true contrarians. All I can do it highlight past performance and current cheapness. The rest is up to you.

If you're interested in Russia stocks, and prepared to wait for a number of years for best results, then the easiest way to invest is via the iShares MSCI Russia Capped ETF (ERUS).

Expect plenty of price volatility - meaning chances to buy more even lower - and also plenty of profit over time.

Rob Marstrand
3.3K Followers
I’m Rob Marstrand, the founder of OfWealth. I publish investment newsletters for private investors, always written in clear, non-technical language. I spent 15 years at UBS Group, the global investment bank, based in London, Zurich and Hong Kong. Then, for five years, I was Chief Investment Strategist at the US-based Bonner & Partners Family Office. Now I live in Buenos Aires, Argentina. Given its chaotic history, Argentina is the perfect place to learn how to survive and thrive in times of crisis.