Cash transactions play a dominant role in the lives of millions of people around the world: Cash is the leading payment instrument for day-to-day purchases such as groceries, petrol, and in some cases, even real estate. For Khin San,[1] a small farmer from Myanmar, cash is central to her livelihood. She often travels with large amounts of cash and uses an unregulated network of brokers to buy fertilizers and seeds for her crops. Khin San’s case is not unique. Cash accounts for roughly 80%,[2] or 1.4 trillion, of consumer transactions around the world per year. Indeed, every person makes at least one or two cash-based transactions daily. 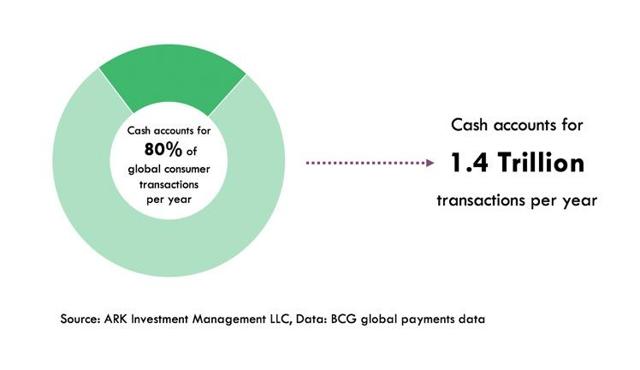 The inefficiencies associated with cash usage are substantial. Governments must grapple with the loss of tax revenues to the “underground economy,” as well as the underserved population’s lack of access to basic financial services. Cash is both expensive to protect and difficult to monitor as the unbanked attempt to track balances and expenses in real time. These inefficiencies are inspiring fintech companies to “disrupt cash,” leveraging upon increased smartphone adoption and mobile broadband availability to disintermediate cash, with a strong nod of approval from governments worldwide.

The opportunity for fintech companies is both obvious and nuanced. Roughly 80% of the VOLUME of retail transactions around the world could be digitized but have not been yet. At the same time, two thirds of the dollar VALUE of transactions already has been digitized.[3] On a dollar-value basis, “cash disruption” already has crossed the chasm, as shown below. In developed markets, in particular, the incentives for merchants to accept credit cards and other digital payment instrument includes[4] convenience, loyalty and rewards, and “payment coupling.”[5] 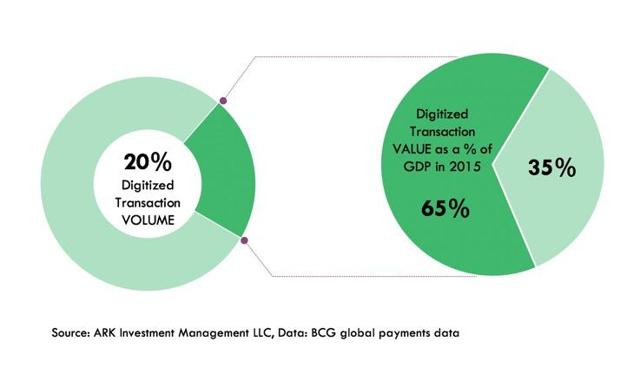 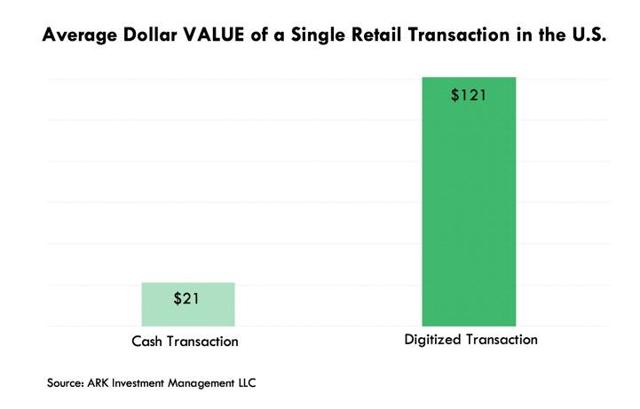 As a result, the next leg of growth in the digitization of the payments space will turn the typical business model upside down. Payment service providers (PSPs) typically rely upon transaction fees that scale with the total dollar-volume of payments facilitated. The winners in the next stage of digitization, however, will be companies that accrue value on a per-transaction-basis, independent of the dollar volume transmitted. That model will have to be data- or information-driven, as shown below. 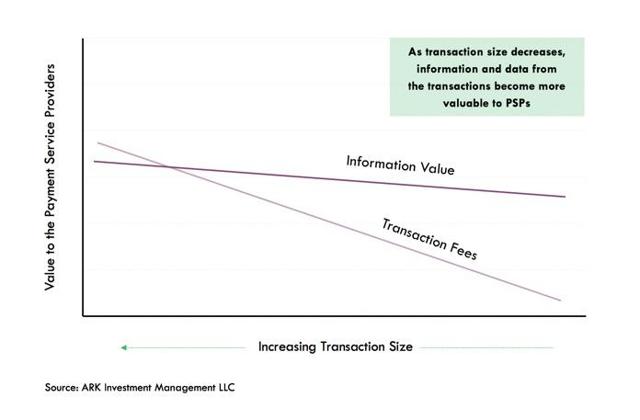 Every transaction, no matter the size, can provide data on who has purchased what and where. When digitized, this information can be used for customer relation management to target new customers with products and services and to assess their credit worthiness. The value of the data is somewhat insensitive to the dollar volume of the transaction, as shown above. Social payment platforms like Venmo, which provide transaction-fee-free transfers, are a good case in point. Venmo’s social feed, including the emojis and messages that customers append to their transfers, is rich with data that allows companies like Nike (NKE) and Dominos to offer individualized marketing and reward programs.

Given the tens of billions of cash transactions occurring daily around the world, companies and financial institutions have little or no insight into a large and increasingly important swath of their customers. To capitalize on this opportunity, the traditional payments model will have to give way to change, especially given the proliferation of smartphones, increasingly with biometric features to secure exchanges of value. A new breed of company, exploiting a differentiated business model, is beginning to facilitate and surface the data around those transactions. PayPal (PYPL), Tencent (TCEHY), Alipay (BABA), Paygo (MELI), Facebook (FB), Apple (AAPL), Safaricom, and Amazon (AMZN) seem to be leading the charge.

[1] Accounts drawn from author’s personal interviews and experiences in Myanmar.

[2] BCG digital payments report indicates that the cash transactions account to 78% of TPV. However, PayPal’s data indicates this value as 85%.

[4] A Visa study of 100,000 restaurant transactions found that customers spent, on average, 30 percent more than those who paid with cash.

[5] Payment coupling is a concept from behavioral studies, explaining why consumers spend more when they use payment cards rather than cash. The concept captures the importance of temporal separation of purchase decision and actual payment.

ARK's statements are not an endorsement of any company or a recommendation to buy, sell or hold any security. For a list of all purchases and sales made by ARK for client accounts during the past year that could be considered by the SEC as recommendations, click here. It should not be assumed that recommendations made in the future will be profitable or will equal the performance of the securities in this list. For full disclosures, click here.

Disclaimer: ©2017, ARK Investment Management LLC ("ARK"). All content is original and has been researched and produced by ARK unless otherwise stated. No part of ARK's original content may be reproduced in any form, or referred to in any other publication, without the express written permission of ARK. The content is available for informational purposes only and is subject to change without notice. All statements made regarding companies or securities or other financial information on this site or any sites relating to ARK are strictly beliefs and points of view held by ARK or the third party making such statement and are not endorsements by ARK of any company or security or recommendations by ARK to buy, sell or hold any security. For a list of all purchases and sales made by ARK for client accounts during the past year that could be considered by the SEC as recommendations, click here. It should not be assumed that recommendations made in the future will be profitable or will equal the performance of the securities in this list. For full disclosures, please see the Terms of Use for this site.

ARK Investment Management
5.31K Followers
ARK Invest holds a precision lens on thematic investing. We focus on disruptive innovation and identify themes that will enhance productivity and create wealth. ARK seeks to research and invest in technologically enabled innovation that cuts across economic sectors and changes the way our world works. Our current themes include: Industrial Innovation, Web x.0, and the Genomic Revolution. Innovation is inevitable, and ultimately wins out in an equity market. Our research is made available on our website and we invite everyone to participate in our discussions around thematic investing in innovation. For more information please visit: http://ark-invest.com