"There are three kinds of lies: lies, damned lies, and statistics" - Benjamin Disraeli.

The most recent case of statistics is from Goldman Sachs economists Jan Hatzius and Daan Struyven who stated, "the US economy is now at full employment."

According to Calculated Risk, the following was attributed to Hatzius / Struyven:

On a broad range of measures, the US economy is now at full employment. Headline unemployment has fallen below most estimates of the structural rate, the discouraged worker share is back to pre-recession lows, and the still somewhat elevated share of involuntary part-timers is arguably structural.

And while the employment/population ratio remains well below its pre-recession level, the gap is fully explained by a combination of population aging and declining participation of prime-age men. This trend among prime-age men has continued for over six decades, has not stood in the way of a strong recent wage acceleration in that demographic, and therefore looks structural.

Job growth remains well above the pace needed to stabilize unemployment. The speed of the likely overshoot is comparable to the average postwar cycle, and we have lowered our end-2018 unemployment rate forecast to 4.1% from 4.3% prior.

I disagree that the economy is at full employment - even though the data referenced in the Goldman Sachs statement is accurate. The reasons are many.

You are not a discouraged worker, underemployed, or unemployed if you have decided to go to university because a job does not exist. Our high schools do not seem to be preparing people for employment - and two to 4 years of potential workers are in college / university after high school. Whatever happened to learning a trade in high school? 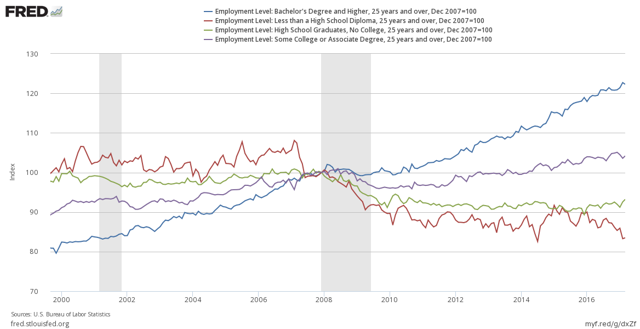 And when you stratify the working years population by age, one realizes that it is the people over 55 and between 20 to 24 which seem fully employed. The rest have not returned to pre-recession levels. 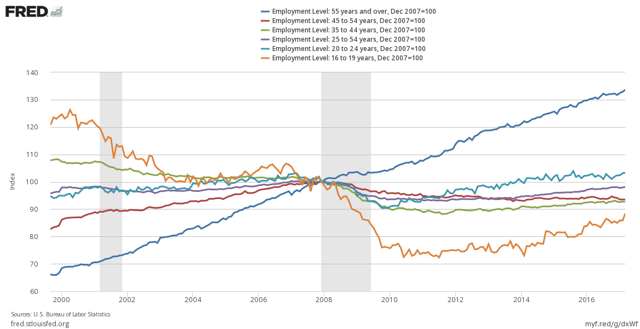 People in the potential workforce have re-arranged their lives. They go to school, live with their parents and do odd jobs, or have moved into the outback.

If an employer had a choice to hire a college grad or a high school grad for the same job at the same pay, would the high school grad ever be selected? This situation forces the young to go to school longer (accumulating education debt). Up to 4% of the US population, at least 10 million potential workers are in this category.

This is not to say that many zip codes are not close to full employment, or that jobs are not unfilled requiring a specific skill set. But to foolishly think that discouraged workers are a proxy for determining the potential workforce is wrong headed, especially since the dislocations of the Great Recession. The BLS defines discouraged workers:

Discouraged workers are a subset of persons marginally attached to the labor force. The marginally attached are those persons not in the labor force who want and are available for work, and who have looked for a job sometime in the prior 12 months, but were not counted as unemployed because they had not searched for work in the 4 weeks preceding the survey. Among the marginally attached, discouraged workers were not currently looking for work specifically because they believed no jobs were available for them or there were none for which they would qualify.

The discouraged / marginally attached workforce is determined by survey - and are contacted by address (mail), phone, internet or in person. Critical thinking dictates that if you have not had a job for a long period of time, you have little money, no address, a burn phone or no phone, no internet, and are not walking around for the BLS to find you.

I live in an area where I see MANY people without jobs. I would assume anyone who thinks the US is near full employment lives and works in a zip code enjoying full employment.

Steven Hansen
3.13K Followers
Steven Hansen (A.K.A "The Hand") was born, raised and educated in California. Steven worked for 25 years for a major international engineering and construction corporation. He has lived outside of the USA almost continuously since 1978. Steven retired in 1995 to sail the world. He is still sailing today and is currently located in Malaysia. On the financial side, Steven is a pragmatist. His motto is to "go with the flow" and believes that the only correct investing method is one which makes you money both short and long term. He does not fall in love with philosophies – only results. He has invested well enough to retire at 45 and stay retired.