Denbury Resources (DNR) reported a profit of $21 million as shown below. While that was better than the first quarter of 2016 (almost anything was better), it continues a trend of decreasing cash flow started in the last fiscal year.

Hedging profits drove the return to profits as shown below. While those profits create an asset, they are unlikely to solve the problem.

Cash flow is now well below the amount needed to fund the capital budget of $300 million. So the company needs to borrow money to maintain the current production or show modest growth. The company made a small acquisition that may modestly help the cash flow situation but is unlikely to cure it. What the company really needs is sustained higher commodity pricing. But lately, commodity prices have begun to fall. As the industry continues to test operating improvements, the industry breakeven may drop and sustain lower oil and gas prices. That would not help a company such as this one with relatively high costs.

Cash flow before the changes of non-working capital accounts shows improvement due to the absence of severance payments. Even the higher figure of $62K is not sufficient to fund the capital budget nor will it adequately service the debt. If the unfavorable net change in assets and liabilities reverse during the year, more of the adjusted cash flow will be available to spend. Often companies in financial distress try to stretch out payments as much as possible. So the company shows favorable adjustments. But sometimes it "boomerangs" back to the chagrin of shareholders. The rotating 12 month cash flow figure is in serious danger of breaching the annual rate of $100 million. At some point key loan ratios will be affected by the continuing cash flow deterioration.

A new gas processing plant began operations. This plant effectively increased production as part of the gas processing. Management had stated that the rate of decline slowed and they were on the verge of increasing production with the reduced capital program. That new gas plant will definitely help, but it is a one time event. 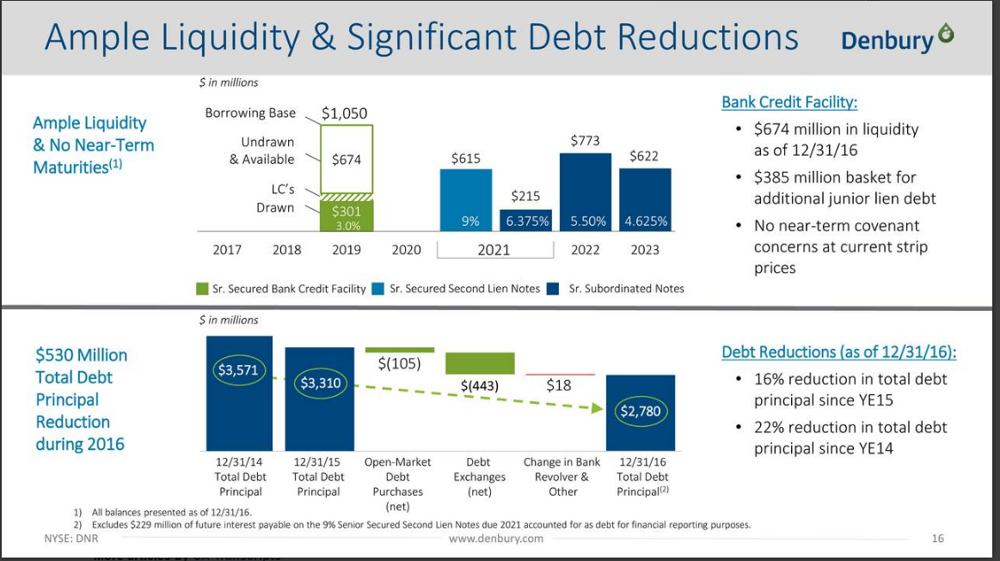 Clearly the company has had some success reducing debt. The debt is not due for awhile, so there is time for management to solve the current financial challenges. The single most significant events determining the company future would be the credit line redetermination process every six months and vendor trust as shown by the amount of letters of credit. Currently both are in viable territory.

While the debt trades in the high yield market, it is not yet trading at extreme distressed levels. Management cleared still another major hurdle when the bank credit line was reaffirmed at current levels. The next reaffirmation will not be due for six months.

However, the credit facility was amended. This can be a slippery slope from which companies do not recover. Management needs to move quickly enough to bring the company back into the original covenant compliance so that no more amendments are needed. These amendments give the lenders extra discretion. Long term, continuing amendments may lead to an eventual destabilization of the banking relationship.

Cash flow is now insufficient to service the debt, let alone fund the capital budget. A reasonable ratio of long term debt-to-cash flow from operations would be 3:1. That ratio would imply a quarterly cash flow of more than $200 million. That amount is more than eight times the latest quarterly cash flow from operations amount. The type of financial shortfalls discussed in the article indicate a company with very serious problems.

I have written about three companies that have recovered from such problems. Both Penn West Energy (PWE), Bellatrix (BXE), and Paramount Resources (OTCPK:PRMRF) moved decisively to fix their debt problems within two years. Another company Approach Resources (AREX) is currently working out its problems with the involvement of the Wilks family companies. Denbury Resources appears to be waiting for a commodity price recovery that is unlikely to happen in time to be of much help. Usually debt problems need to be resolved promptly for any chance of success.

The company could reduce its debt burden by making some accretive asset sales. Selling properties may be a lot harder than it appears. Dropping commodity prices imply dropping lease values. Since the company is a high cost producer, at least some of its properties are not worth much anyway. It may have to sell the best low cost projects to just survive. But selling those projects could push average production costs even higher. 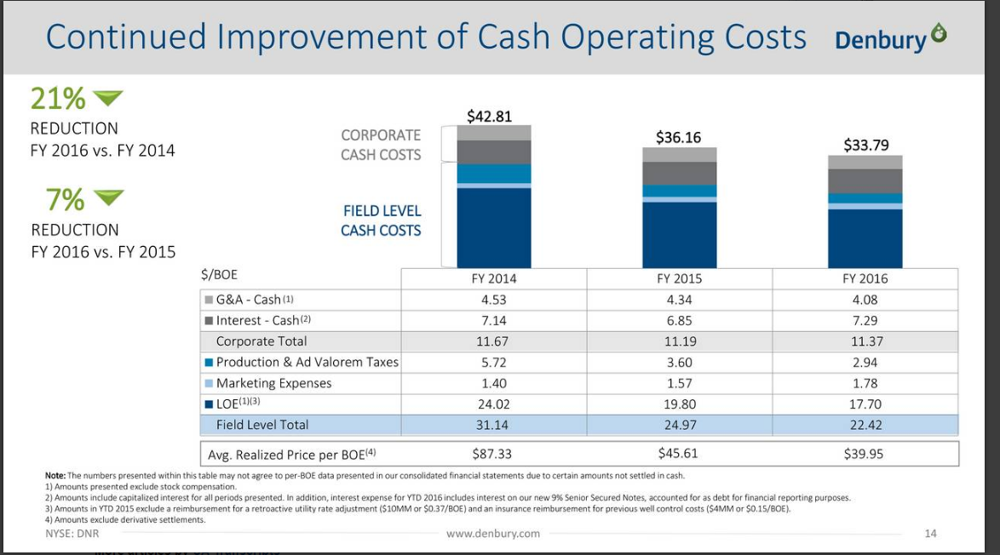 The debt is clearly a very large financial handicap. In fact, interest expense now exceeds cash flow in the latest quarter. Interest expense per BOE has climbed in the latest quarter as the effects of the financial distress become more and more apparent to the market. The corporate total is nearly one-third of the cost to produce. That relationship will not enable the company to survive long term in the new lower commodity price era. 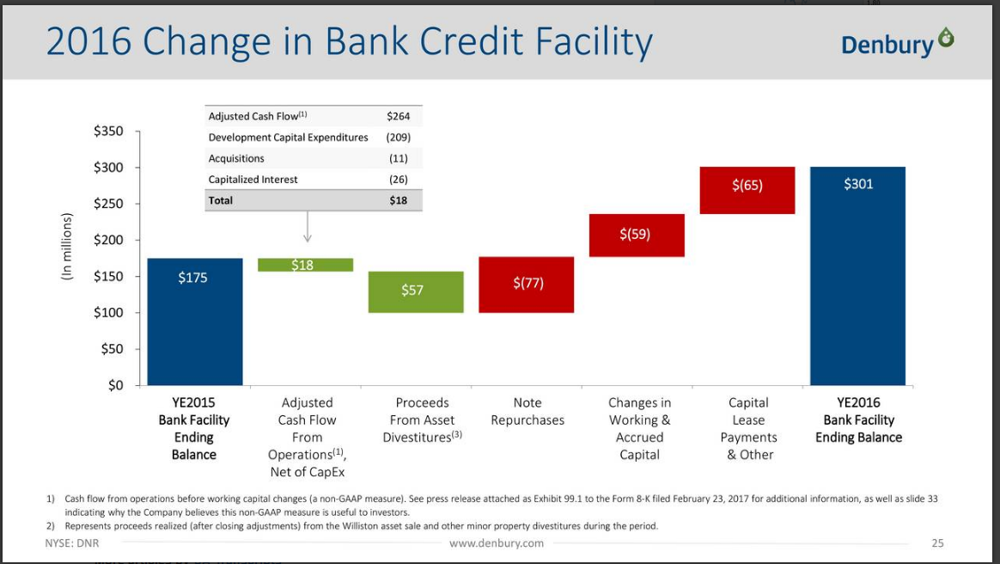 Use of the company credit line climbed last year. It will continue to climb this year to fund the capital budget. But the bankers are usually one of the more nervous lenders when a company is in financial distress. So reliance on the bank line may prove to be the undoing of the company. Each six month credit line redetermination process is becoming more important.

The company passed a certain bar when the cash flow no longer could fund the capital budget. That process may have marked the beginning of the end if it is not reversed. Production growth is usually essential unless the company can sell enough valuable but undeveloped assets to climb out of the current financial situation. For high cost producers, that is not usually an option.

Still, the company has six months until the next credit line redetermination process. Continuing commodity price drops could bring a resolution sooner than that. Let's hope that management finds a way out of this. Until it does, this stock is an excellent short candidate. Only an extremely strong and sustained price rally, or some very unlikely large production cost cuts will help the company at this point. The lack of asset sales points to an inability to sell some of the projects for helpful accretive proceeds. That assessment can change at any time. However, property sales become less likely to cure the problem as the financial distress continues.

Disclaimer: I am not an investment advisor, and this article is not meant to be a recommendation of the purchase or sale of stock. Investors are advised to review all company documents and press releases to see if the company fits their own investment qualifications.

Long Player
17.09K Followers
Author of Oil & Gas Value Research
Get analysis on under followed Oil & Gas companies with an edge.
I am a high school teacher for a decade. Before that I was an analyst (operations and financial) and for a short time a Controller I have a B.S. with an emphasis in Accounting and an MBA (for which I studied Finance, Economics, and Management) I passed the CPA exam on the first try and am a retired CPA in the state of Maryland. I have a high school teaching credential and an MA in Math Education

Disclosure: I am/we are long AREX. I wrote this article myself, and it expresses my own opinions. I am not receiving compensation for it (other than from Seeking Alpha). I have no business relationship with any company whose stock is mentioned in this article.