When I was in the middle of writing "Looking Into Ethereum," I had a discussion with a friend who has been interested in cryptocurrency for a long time. His currency of choice, at the moment, is Monero. I decided to look into the currency and write an article for the currency. However, rather than dedicate the article fully to Monero, I am going to compare a few cryptocurrencies, and show why they are different than Bitcoin and how they could compete, or even coexist, with the most well known cryptocurrency, in what might be called the "cryptocoin ecosystem."

Before I start, here are a few issues with Bitcoin. First, Bitcoin is slow. It takes 10 minutes for a Bitcoin transaction to be confirmed, or even longer, depending on the transaction fee. One of the most powerful features of Bitcoin also makes it problematic if you are truly privacy oriented. Bitcoin's ledger is completely open. Every transaction can be analyzed. Third, Bitcoin's governance, contrary to the original goal, has become highly centralized. Finally, Bitcoin is at risk of a 51% attack. Finally, there is nothing really backing the value of Bitcoin.

Litecoin is often described as being to Bitcoin, what silver is to gold. First, the upper cap of how many coins there are in each currency is different. There is a total of 84 million LTC available to mine, as opposed to only 21 million for BTC. One of the main differences between LiteCoin and Bitcoin is that LiteCoin is faster. It takes much less time for a transaction to clear if you are using LTC: about 2.5 minutes, as opposed to the 10 minutes for Bitcoin. Coindesk has a more detailed comparison between the two.

I am interested in the idea of Litecoin overtaking Bitcoin. However, a quick look at the data suggests that it is not going to happen. Aside from a few spikes, the ratio between LTC and BTC has actually been declining. 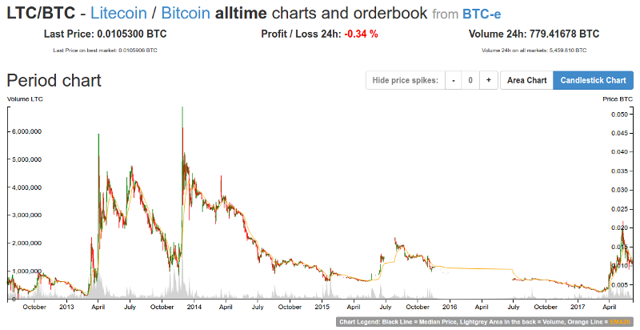 Monero's philosophy is more or less a 180 from Bitcoin's. While Bitcoin is a fully open and public ledger system, Monero is private. While for most transactions, a public ledger is not a problem, people do like their privacy. By public, I do not mean that a person can immediately see who transferred money from whom.

Every individual is pseudo-anonymous, because of the Bitcoin address. However, if someone can link addresses to individuals, then it is indeed possible to see how much money was sent and when. More on the current privacy features and issues with those features can be found in "Monero Successfully Hardforks to Increase Privacy and Anonymity - CryptoCoinsNews."

Most blockchains have a centralized governance model. However, for Dash, the governance is built into the blockchain itself. This helps protect against issues like splits during hard forks. A major difference in the architecture between Bitcoin and Dash is that Dash has a concept of a master node.

Masternodes are required to have 1000 Dash collateral, a dedicated IP address, and be able to run 24 hours a day without a more than a 1 hr connection loss. Masternodes get paid 45% of the block reward on every block, which is distributed to masternodes one at a time. Typically, around 2 dash is paid to each masternode every 7 days. (Dash)

This ensures that the masternodes are invested in the longevity of Dash. Budgets, changes to the system, etc are all voted upon by the masternodes. All voting results are public information. Funds to pay those who maintain the software come from a treasury which is controlled by the blockchain itself. This ensures a relatively decentralized, and uniform governance. There are a number of discussions on Dash's governance model including "Why Governance Is Essential in Cryptocurrency - Dash Force News."

One risk for Bitcoin, and other cryptocurrencies is the 51% attack. If an individual, or group, control 51% of the computational power of the network, they can manipulate the network maliciously. They would have significant control of the public ledger, be able to spend the same bitcoin repeatedly and block other transactions. (Learn Cryptography - 51% Attack)

This is one of the reasons why the Bitcoin network has the BTC currency. If people adding computing power get paid, even if just in these tokens, so long as the tokens have convertible value, and that value is greater than the cost of the computing power that they provide, then it ensures a fair number of unique people, preventing the control of the network. However, as mining has become more difficult, people turn to mining pools, and the number of miners decreases, the risk does become more concerning. (As Bitcoin Halving Approaches, 51% Attack Question Resurfaces - CoinDesk)

GoldCoin uses a different model from Bitcoin to help prevent a 51% attack, relying on a number of rules which can be found here. Admittedly, this model seems to only prevent one kind of attack: reusing coins. Messing with the network is still quite possible. There seems to be a lot of debate, in the cryptocoin community, over the utility of the model.

Not to be confused with GoldCoin, ZenGold, One Gram, OZcoinGold, etc try to remove the issue of a cryptocurrency with no physical backing. I have written a few discussions on why I think gold is superior to BTC, in terms of being a currency. For each of these coins, the value of the coin is backed by physical gold. To me, this is still not the same as buying physical gold, but neither is purchasing shares of (GLD) or other similar ETPs.

Gold backed cryptocurrencies are not likely to skyrocket in the same way that the other cryptocurrencies are, because they are tied to something which already has a fairly consistent value. This actually makes it more useful as a currency. Speculative vehicles are generally held, not spent on day to day transactions. That is not how currency should work. There are a number of ICOs (initial coin offerings) occurring all around the same time, so it is difficult to pick one coin of interest, however One Gram is in ICO right now, so I may pick up a few coins. One Gram is also Sharia compliant, meaning that it is open to the large Islamic population of the world.

The network effect protects internet technologies like Bitcoin. The more users of the currency, the less likely that it will be that something new can come along and replace it. Bitcoin may not be the best cryptocurrency, but it is currently the most popular, by far. It is the highest priced coin, the coin with the largest market cap, and for many exchanges, the one that sees the most trading volume, although ETH trades at high volumes as well, and it does vary from exchange to exchange.

A better cryptocurrency does have the potential to replace Bitcoin. A different cryptocurrency has the potential to coexist in a cryptocoin ecosystem alongside Bitcoin, or whatever replaces it. Litecoin fills almost the exact same role as Bitcoin. It is better, however it needs to be good enough to overpower Bitcoin's network effect, otherwise it will, at best, remain Bitcoin's "silver." Given the decline in the LTC/BTC ratio, LTC does not seem like it has much chance of overcoming BTC.

Monero does fill a very different role from Bitcoin, thanks to the focus on privacy. For that reason, Monero could fit in alongside a public ledger cryptocurrency. Dash has a solution to the centralized governance problem, GoldCoin tries to take on the issue of a 51% attack, and gold backed coins have the potential benefit of price stability. Then of course there is Ethereum, which I addressed in detail in "Looking Into Ethereum." Right now, these cryptocurrencies/blockchain technologies are the ones that I am keeping an eye on the most.

All of the coins that came after Bitcoin are referred to as Altcoins. Once Bitcoin started to become popular, and even moreso after mining bitcoins moved from simple PC mining to dedicated mining rigs, Altcoins took off. However, there are now over 700 different currencies, according to "Map of Coins.", and many of the Altcoins have already fell by the wayside. Many currently used coins have limited support, outside of major crypto-exchanges. Any currency must be easy to use, not just for the tech savvy, but for the average person.

Because of all of the option, it can be very difficult to figure out what coins to add to your portfolio. Nobody wants to be stuck holding the bag. It is important to do a lot of research on each currency, and try to identify those currencies which are likely to fit together in an overall ecosystem, rather than trying to pick a single winner.

Furthermore, the political atmosphere is going to have a major impact on how cryptocurrencies fair in the long term. Japan now recognizes BTC has money. The United States does not. Cryptocoins are considered to be commodities in the United States, and that's problematic. I do not think any government will be able to contain the technology, and it will grow. However it is currently a proof of concept, being used as if it were a final stage product.

Daniel Goldman
435 Followers
I am an occasional investor/trader and researcher. I use a combination of market theory and economic theory to determine my trading strategies, but focus on periods where contrarian actions seem reasonable, such as when market expectations seem to be trending in the opposite direction as fundamentals. Research Topics I am interested in the relationship between pattern day traders and investors and how value flows between these two groups.

Additional disclosure: All market capitalization and prices are approximate and none of this information is a suggestion that any of these specific currencies should be the ones that are added to a portfolio. Whether or not to include cryptocurrencies in a portfolio, and which to include, is only something that can be determined after extensive research on the market and the technologies.

I may take a position in one of more of the cryptocurrencies mentioned in this article.