Nearly one year ago I introduced a new source for dividend growth investors: the German Dividend Aristocrats (GDA). Check out the original article here.

This list is for informational purpose only. I am not going to create a portfolio out of all these companies. It should be a helping hand for investors who are seeking more international exposure. As you know: international diversification can help dividend growth investors reduce risk and enhance total return.

Please look at these stock selections as exactly what they are: possible candidates for further research of your own.

One word before we start: I am not a native English speaker. There might be some formal mistakes or "rough language" - I hope you can "ignore" that. My apologies for that.

The definition of the selection is given by its name:

The compilation includes only companies that pay dividends. This shows a significant difference from the situation in the United States: First, it is not self evident that companies pay dividends. Secondly, German companies usually pay an annual dividend (and not quarterly). That means there is only one distribution over the year. The main dividend season in Germany is from April to June when most general meetings are held.

I have increased the number of underlying stocks for analysis: the number of checked companies now includes a total of 165 analyzed stocks. 159 of them paid a dividend in 2017 for fiscal year 2016. Six companies completely cut their dividend.

My analysis goes back to the year 2000 (no further). The reasons for this "cut" are as follows:

Let`s have a look on the average numbers first:

And now let's break down the number of companies and their dividend increases: 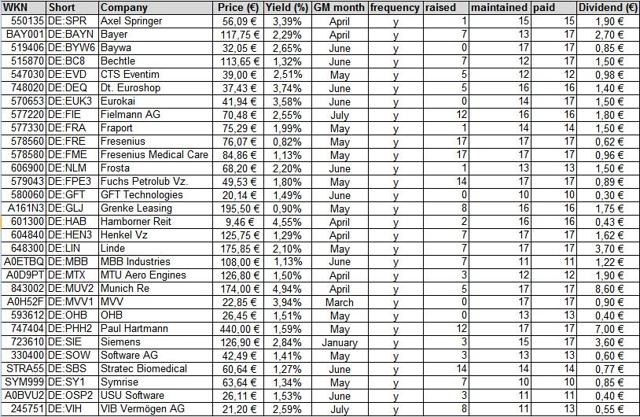 Source: own research, prices from June 2017

The GDA now shows 30 companies which is 2 more than last year.

The following six companies have increased their dividend for 10-plus years (in alphabetical order):

The most stable and secure dividend of Germany is paid by the world's largest reinsurer: Munich Re - headquartered in Munich, Germany. It has not reduced its dividend since 1969. For my selection the company gains a full 17-year streak.

To come to concrete recommendations for further research I have created two so-called top lists: Dividend-Increasers and Dividend-Maintainers.

The rules for these two lists are as follows:

The highest yielding German Dividend-Increasers are:

The selection shows 11 companies (7 in 2016). New to the list are Munich Re, Dt. Euroshop, LEG Immobilien, Leifheit and Talanx (all because they increased the dividend for the fifth year in a row) and Bertrandt (because of higher yield).

Off the list are two companies: Baywa and KPS.

The highest yielding German Dividend-Maintainers are:

The complete selection of the GDA (German Dividend Aristocrats) is still work in progress. Updates and upgrades will be added from time to time. I will keep posting any news here on Seeking Alpha.

The GDA might be a good starting point for anyone who is interested in more international diversification.

Let me give you some quick information for non-German investors: there is a German tax on all dividends, which is called "Abgeltungssteuer." This tax is automatically deducted by the banks or online brokers. It is exactly 26.375% (25% tax and an additional 1.375% as special tax we Germans have to pay since the reunification). For US investors it is limited to 15% by tax treaty between US and Germany. For US IRAs there is no German dividend tax by treaty amendment.

Important information: I have created this list on my own. The data source for all the data is direct contact to the investor relations teams of the companies. In some cases where I did not get any answer to my questions I got the information from the company website and/or further web research.

I am looking forward to reading your comments. I am happy to have your feedback to improve the compilation. Let me know if there is anything you miss.

rickrack
313 Followers
German buy&hold investor with focus on dividends. Father of three. Rated "best daddy in the world" :-)Managing three portfolios:One of them is the Anglo-American-Canadian dividend growth portfolio.Author of the German Dividend Aristocrats - check them out here on SA
Follow

Disclosure: I am/we are long MURGY, SIEGY, BASFY, VIBVY. I wrote this article myself, and it expresses my own opinions. I am not receiving compensation for it (other than from Seeking Alpha). I have no business relationship with any company whose stock is mentioned in this article.