The semiconductor industry is well known for its price volatility and is not an investment sector for the weak at heart. There are no dividends to this equation - stock appreciation is the only game on offer. That said, consumers in search of ever-faster performance from their electronic devices, from computers and smartphones to driverless cars and cloud providers, will forever capture the imagination of investors wanting a piece of a $378 billion worldwide market with a projected annual growth rate of 11.5%, according to World Semiconductor Trade Statistics data. While chips for whatever application will cycle in and out with demand by device manufacturers and consumers, pricing power is likely to continue to reside with material producers. One such material producer is Synopsys (NASDAQ:NASDAQ:SNPS).

Synopsys lays claim to being the 15th largest software company in the world, according to company statistics. SNPS provides software across the entirety of the software spectrum, from engineers creating advanced semiconductors to software developers programming the highest level of quality and cyber security into their applications.

The company's ongoing growth model centers squarely on its proprietary electronic design automation (EDA) software that allows engineers to both design and test integrated circuits or chips. Another important component of the revenue mix is the company's pre-designed circuits that engineers use as components for larger chip designs. The company also provides software, hardware and ongoing technical support that brings these designs together as working applications for not only the electronics industry but also for financial, automotive, industrial and energy sectors of the greater economy worldwide.

Cyber security is a critical and ongoing concern. As an example, today's average car has more than 100 million lines of code with automakers predicting a time in the very near future when that number doubles. The average level of defects per 1,000 lines of code ranges from 15 to 50, according to industry statistics. While the statistic most certainly carries meaning to a software engineer, in lay terms a security breach of a data center is the loss of data. A security breach of a driverless car application, the threat is exponentially greater - the possible loss of life. Cyber security moving forward becomes all the more daunting as greater portions of our lives become dependent on computer programs.

Figure 1: Synopsys and the Philadelphia Semiconductor Index with Selected Ratios, 2015-16 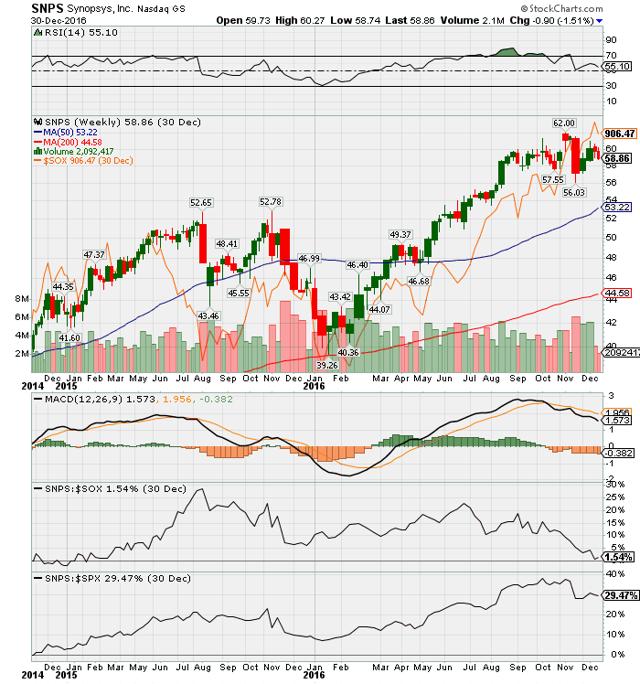 Synopsys fell steadily throughout the calendar fourth quarter of 2015, nudging its 200-day trading average by the close of that year. Investor support for the stock largely disappeared. Still, the stock maintained a positive spread against the S&P 500 of roughly 9% through the close of 2015 (see Figure 1, above). Meanwhile, the US economy had also largely ground to a halt, posting an annualized GDP growth rate of 0.9% in the fourth quarter and an even worst GDP post of 0.8% in the first quarter of 2016. Corporate spending on equipment, fixed investment and inventories were all negative for both quarters while spending on structures eked out an 0.1% increase in the first quarter after falling negative for the entirety of the year, culminating with a 15.2% quarter-over-quarter (QOQ) plunge in the fourth quarter of 2015. It took investors about six months to reverse course which began in mid-February 2016 which began a six-month breakout which caused the stock to surge almost 58% by the end of the year. Synopsys had still managed to outpace the Philadelphia Semiconductor index by 1.59%, while surging well past the S&P 500 by 29% over the period.

By the end of Synopsys' first quarter in January, total revenue was up 138%, net income was up 44% and EPS at $0.56/share was up 44% on January 2016 YOY. The stock price climbed equally as fast as investors piled into the stock through the first week in March, outpacing the S&P 500 by about 15% since mid-February (see Figure 2, below).

Figure 2: Synopsys and the Philadelphia Semiconductor Index with Selected Ratios, 2017 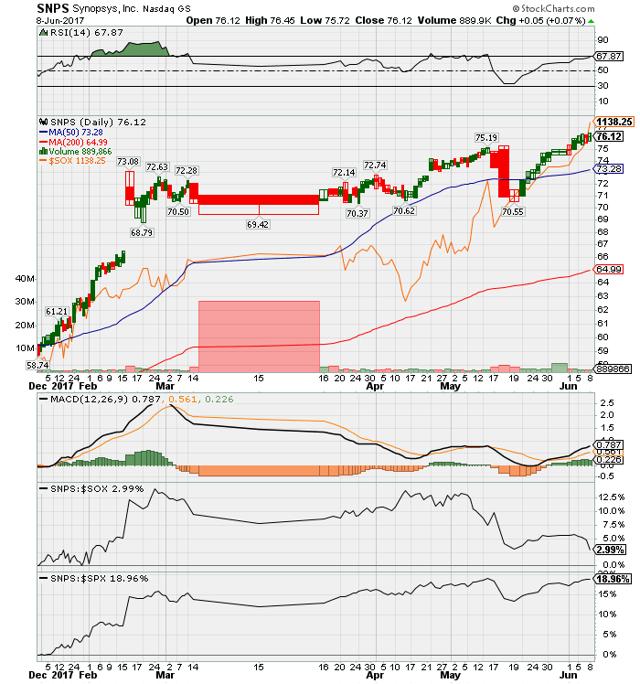 By the end of the company's second fiscal quarter through the end of April, total revenue has slowed precipitously YOY to 12.41%, still a fairly strong, above-trend performance - but far from the heady 138% romp through the end of the 1st quarter YOY. Net income had fallen 23% on April 2016 while EPS fell 24% over the period. Investors broke innumerable keyboards pounding the sell button for a two-day stretch that sent the volume of shares sold through 30 million, leaving the stock to trade sideways through the second week in April. Another investor surge sent support scooting along the upper reaches of the RSI range through the second week in May before support literally evaporated, sending investor support levels to the bottom of the RSI range with another flurry of sustained selling which this time proved short term and overdone. The stock has gained almost 10% in market value since the third week in May, outpacing the Philadelphia Semiconductor Index by 3% while breezing by the S&P 500 by almost 19% over the period (see Figure 2, above).

Disclosure: I am/we are long SNPS. I wrote this article myself, and it expresses my own opinions. I am not receiving compensation for it (other than from Seeking Alpha). I have no business relationship with any company whose stock is mentioned in this article.