Boeing (NYSE:BA) is one of the leading world players in the design, manufacture and service of civilian aircraft from which 69% or $65.1 billion in revenues across six commercial programs through the end of 2016 derives. The figure comprises about 17% of a global industry estimated at $378 billion through the end of 2016 with a growth rate of roughly 7.4% since 2011. True to form, the company's civilian business has expanded almost 40% since 2010 when commercial aircraft sales comprised 49.50% of total revenue or $31.8 billion.

Yet beneath the headline number a more problematic impediment to growth emerges. Boeing's defense, space and security operations comprised 31.19% or $29.5 billion through the end of 2016. That total was 49.67% of revenue or $31.94 billion in 2010. Boeing's defense contracting revenues have been falling since 2013 as has its contractual backlog, signaling a dearth of new orders hitting design and assembly floors. On the commercial side, the market value of commercial aircraft stretches into the billions of dollars. For many of the world's private and state-owned airlines, financing such purchases has become all the more difficult. These are headwinds to organic growth beyond the company's immediate control, but could dramatically impact balance sheet calculations moving forward.

On the commercial side is the continuing fallout from the US Export-Import Bank. Many foreign governments and airlines finance their purchases through the Bank, whose charter was allowed to expire in June 2015 due to partisan opposition in the House and Senate. While the bank's charter was begrudgingly reinstated in December 2015 with a mandate that extends through the end of the fiscal year 2019, the bank's board lacks a quorum which precludes foreign transactions above $10 million.

On the military side, the Budget Control Act (BCA)(2011) set in place across-the-board budget cuts based on debt reduction targets over the course of a 10-year period through 2021 at a time when the country had just entered the recovery period from the worst financial contraction since the Great Depression. For the Department of Defense (DOD), the resulting budgetary caps meant a reduction of $1 trillion over the 10-year duration of the Act. With the failure of the Super Committee to strike a budget deal in November of 2011, sequestration was a foregone conclusion. With the March 2013 trigger, 600,000 civilian military employees worldwide were placed on furlough. Training and maintenance schedules were also delayed and/or cancelled to keep DOD spending within BCA guidelines.

Creativity is always the mother of invention. A series of last minute budget deals in January 2013, late 2013 and again in late 2015 essentially moved future allocations forward to meet current spending needs. The 2015 deal added an accounting gimmick called the Overseas Contingency Operations (OCO) which funded two off-budget categories with $8 billion each, euphemistically entitled defense and non-defense spending. OCO created a loophole that DOD currently uses to this day to fund foreign operations including Syria and Afghanistan.

The caps remain at their original levels for the last 5-year period of the BCA act through 2021 to meet the arbitrary debt reduction targets of the original act without regard to strategy or long-term planning in a changed global security environment. BCA largely undermines long-term planning and strategic thinking as a guiding tool of policy at the behest of arbitrary deficit targets. Arguably, BCA is one of the many reasons why Boeing continues to shift its corporate attention to the civilian side of the equation. 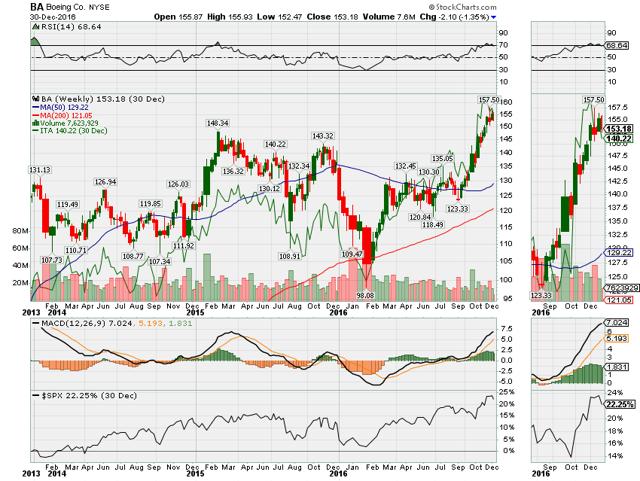 While the company shift from a defense/commercial revenue split in 2010 was taking place, overall revenue growth remained mixed for the period. Commercial revenue increased 13.23% YOY in 2014 while defense revenue fell just shy of 7% for the same period. Commercial backlog grew by 18% while the defense backlog declined by 5.45%, with the biggest backlog decline in military aircraft which declined 10.43% for the period. Total revenue grew by 4.78%. Operational earnings remained robust, growing at 18.87% for the period which made net earnings jump by a similar amount while earnings per share jumped just short of 24%. Cash dividends declared through the end of the year gained 42%, setting up a 14% market increase for the stock by June after an early year market slide (see Figure 1, above). The uptick didn't last long, however, as the stock fell through its 50-day moving average and largely traded below the measure in a narrow range for the remainder of the year, ending up with a gain of almost 4% on the year, still outpacing the S&P 500 over the period.

Boeing lurched out of the 2015 starting gate, putting up a market gain of just under 33% by the end of February. The market thrust quickly proved unsustainable as the stock slipped through its 50-day moving average by August only to rally once again before crashing forcibly through its 50-day moving average for the second time in the year to end up down of 2.19% by year's end. Revenue was up almost 6% but earnings from operations slipped negative for the year as commercial airplane operations income fell almost 20% sending net earnings negative by almost 5%. 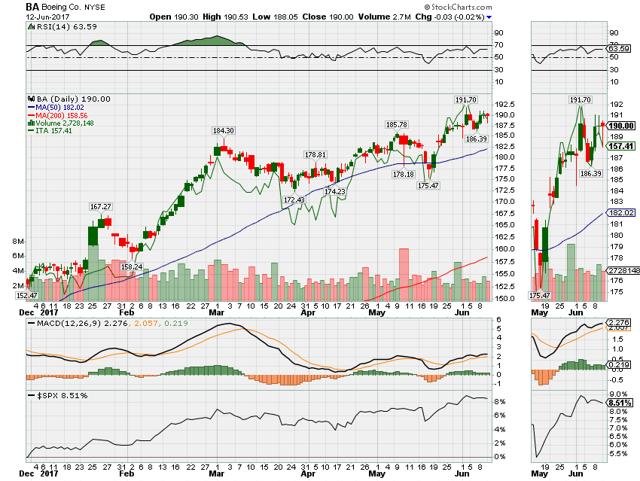 In April, Boeing announced its second major commercial aircraft deal with Iran, this one an agreement with Aseman Airlines for up to 60 of the company's latest, fuel efficient 737 Max single-aisle plane. Last year Boeing entered into a $16.6 billion deal for 80 commercial aircraft with Iran Air in the closing days of the Obama administration and is waiting for final approval from the Department of Treasury's Office of Foreign Assets Control which grants the necessary licensing for foreign sales. Airbus also entered into a contract to sell up to 100 planes to the Iran's state airline as the sanctions against the country came down with the inking of the July 2015 nuclear accord that sent European companies scurrying to Iran to re-establish long severed business ties with the Islamic Republic.

Boeing's Aseman deal is now the first such agreement under the Trump Administration. Candidate Trump was highly critical of the nuclear pact with Iran and made numerous promises to alter and/or rescind the pact once in office. Congressional sentiment echoed many of these arguments, seeking to either curb or outright prohibit such deals with Iran whose civilian air fleet has been pummeled to obsolescence under western sanctions that have been in place in one form or another since the Iranian Revolution of 1979. The Aseman deal sets the stage for an interesting rhetorical battle pitting US jobs against a determined opposition in two of the three branches of government at the federal level. About 18,000 US jobs would be sustained over the course of the contract with scheduled deliveries slated begin in 2022 if approved.

Boeing had a big surge in investment sentiment in mid-January with buy-volume broke through the 9-million mark on the 20th of January. Once again, the buying spike was short-lived as profit taking took hold through the first week in February. The stock rallied strongly sending the RSI into over-bought territory for about a month with a market gain of just over 16% before a sustained month of profit-taking took hold through mid-March and much of April. The stock largely traded sideways losing a little over 2% before dipping below its 50-day moving average in mid-May. The stock is up just over 8% through Tuesday's market close (13 June) and roughly 25% year-to-date (see Figure 2, above).

All the while, Boeing's sale of products and services slipped once again through the first three months through the end of March, falling 7.32% to $21.0 billion YOY as the delivery of planes and services fell for the period. With the decrease in delivery and services, total costs and expenses dropped almost 10%, boosting net earnings before taxes 12.52% to $1.96 billion over the period. Contractual backlog orders fell 3.53% YOY in 2016 to $416.2 billion from $431.1 billion in 2015 which fell 1.98% YOY from a post of $440.1 billion in 2014. Earnings per share were up as a result almost 28% while cash dividends paid per share increased to just over 30% for the quarter to $1.42/share.

Most recently, news reports this week outlined a Qatari military deal to buy up to 72 F-15 jet fighters valued at more than $12 billion with the preliminary paperwork being initialed yesterday (15 June) by Secretary of Defense James Mattis and his Qatari counterpart, Khalid al-Attiyah. Qatar is in the middle of a diplomatic riff with Saudi Arabia which recently severed relations with the Persian Gulf monarchy. The dispute has placed the Trump administration in a precarious position over the appearance of the US taking the Saudi side in the matter which has publicly accused the Qatari monarchy of aiding regional terrorism. The US maintains a critical air base at Al Udeid in Qatar that is used for US air support operations in Syria as well as protecting oil routes in the Gulf. Boeing also claimed to have secured a $50 billion deal with the House of Saud for a variety of military material including war planes, helicopters and related munitions as a result of the President's recent trip to the Kingdom.

Without much debate, Boeing is an outsized dividend play, averaging 27.14% since 2012 YOY. Revenue growth averages a more modest 6.79% over the same period with the last time an annual growth beating the average of the period coming in 2012. Income from operations is more modest still, averaging 2.31% for the period with 2014 and 2013 beating the five-year average. Net earnings averaged 4.60% with 2014 and 2013 both exceeding that average.