Just as CenturyLink (CTL) was getting a lift from the announced CEO succession plan, the telecom got hit with multiple lawsuits. The suits charge a Wells Fargo (WFC) scheme hitting the stock by $3 in just over a week.

The question investors need to ask is if such a culture similar to a financial is even possible. Is CenturyLink not an even bigger buy based on a succession plan that would only escalate on any real evidence of fraud in the sales department under the current long-term CEO? 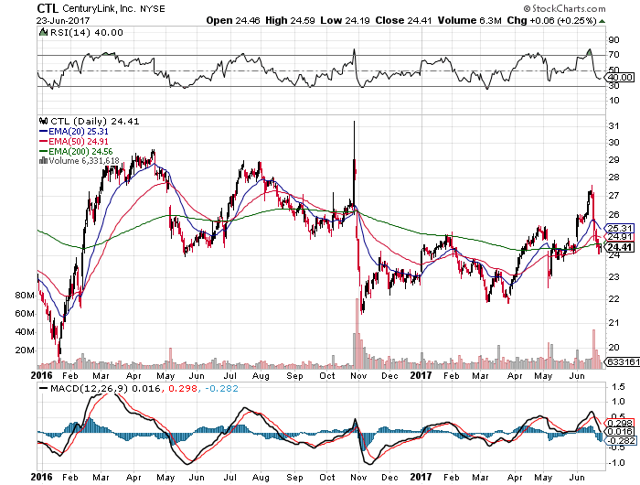 First and foremost, the claim that CenturyLink encouraged a sales culture that falsely signed up customers for services that weren't requested is concerning. Second and more importantly, the difference between signing up somebody for a phone line and a credit card is vastly different.

The firing of Heidi Heiser closely after reporting the issue on a internal message board is curious, but the lack of reporting the issue through the proper channels was just as questionable. The filing of a $12 billion class-action lawsuit against CenturyLink, though, is absolutely absurd.

CenturyLink is only worth $13 billion now and the self-proclaimed whistleblower only placed the extra fees at millions of dollars. The lawsuit is clearly a stretch with the amazing mention that a customer was charged for a repair that was never made. Hardly the makings of a massive fraud scandal.

Anybody working in a billing department at a major telecom knows that customers get incorrectly charged for services all of the time due to internal errors and mistakes, not fraud. The issue is how a company resolved those billing mistakes and this isn't clear in these lawsuits.

The comparison to Wells Fargo is very misplaced and naturally used to garner the most media attention to the lawsuits. The Bloomberg article highlights how virtually all telecoms have a history of complaints and settlements surrounding labor practices and questionable billing practices.

The unsettling part at Wells Fargo was the requirement for the large bank to overhaul the whole sales and customer services practices that hinted at a major impact to profits and potentially the value of the stock. In addition, a management shakeup was required including the replacement of a once respected CEO and the continued demands for the replacement of the board of directors by Sen. Elizabeth Warren.

The large bank was utilizing sales practices to grow the business and generate industry leading metrics. CenturyLink is constantly losing customers raising questions on how a high pressured sales practice was actually in place. The telecom has constantly seen revenues decline in the last five years. 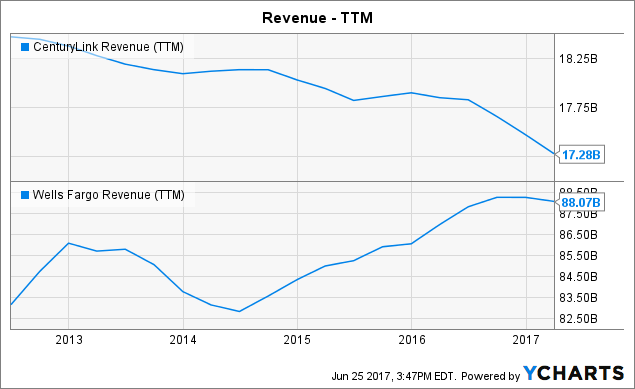 A comparison to the Wells Fargo situation appears highly overblown. Even if the situation plays out similarly, the lawsuits will cause CenturyLink to move forward with the executive changes that already place Level 3 (LVLT) CEO Storey in place as the CEO starting in 2019. The market, including activist shareholder Corvex Management, would actually prefer this move in a drastic shift from the Wells Fargo scenario.

The biggest risk is that something comes out to impact the closing of the Level 3 merger. The companies are targeting a closure prior to the end of September.

The benefits of the merger are enormous. Level 3 trades at the highs due to the offer, and the combined entity will obtain the benefits of nearly $1 billion in synergies and $10 billion in NOLs from Level 3 that will reduce net cash tax expenses and generate cash flow to easily pay the nearly 9% dividend.

The key investor takeaway is that Wells Fargo trades higher now despite the shady practices identified last September that led the bank to the leading position in the sector. Regardless of the findings at CenturyLink, the telecom clearly isn't in the same position as the bank, making the impact far smaller.

Use the dip to load up on CenturyLink as these lawsuits on the surface don't appear impactful enough to derail the Level 3 merger.

Stone Fox Capital
38.26K Followers
Author of Out Fox The Street
Out Fox the market with misunderstood, high reward opportunities
Stone Fox Capital Advisors, LLC is a registered investment advisor founded in 2010. Mark Holder graduated from the University of Tulsa with a double major in accounting & finance. Mark has his Series 65 and is also a CPA.

Disclosure: I am/we are long CTL. I wrote this article myself, and it expresses my own opinions. I am not receiving compensation for it (other than from Seeking Alpha). I have no business relationship with any company whose stock is mentioned in this article.