Rite Aid (NYSE:RAD) investors are likely waiting with bated breath for the week ahead when the FTC is expected to pass judgment on the merger between Rite Aid and Walgreens (WBA). RAD is currently trading a bit above $3 per share despite the maximum acquisition price of $7 per share offered by Walgreens (dependent on how many stores the former has to sell off to satisfy the FTC), indicating the market doesn't have very high hopes for a successful merger. 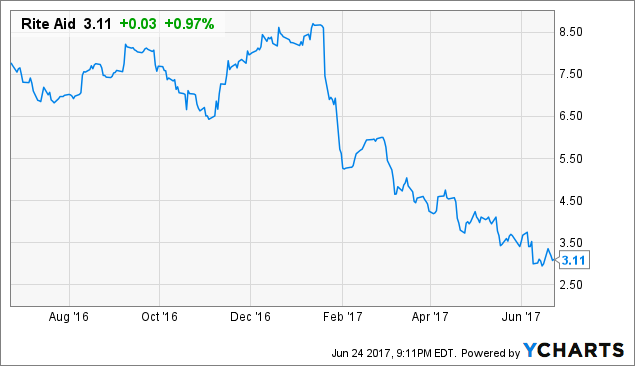 And for good reason. The FTC has been deliberating this merger for two years, which is not a good sign for the success of the deal. This was further reinforced when the FTC made a further request for information this past May. Throughout the process, the FTC has demanded significant concessions in order to lessen the anti-trust impact of the merger, but to no avail to this point.

A report back in April claimed that the FTC was leaning towards a lawsuit to block the merger, which sent shares even further down. Then another blow was struck Thursday when D.C.-based Capitol Forum reported that the acting director of the FTC's Bureau of Competition Tad Lipsky would recommend a lawsuit to block the merger in agreement with the determination of his staff the bureau.

Lipsky has over 40 years of experience in anti-trust law and practice, and has a reputation a "conservative libertarian" who favors fewer instances of FTC involvement and enforcement. In fact, much analysis following the selection of Lipsky and other appointees concluded that fewer mergers would be blocked and fewer reviews would be initiated on proposed deals.

With this context, it should be worrying that an individual that favors less FTC interference and enforcement is recommending a lawsuit to block the Rite Aid-Walgreens merger. This development indicates there are some significant anti-trust hurdles in this case that will be tough to bypass if a man like Lipsky is recommending against its passage.

It is also important to note that the two individuals who will ultimately determine the fate of this merger are Commissioner Terrell McSweeney, a Democrat, and acting FTC Chair Maureen Ohlhausen, a Republican. Ohlhausen personally appointed Tad Lipsky to his role as head of the Bureau of Competition, indicating that his interests and views on the FTC's mission align with hers. This is important because it increases the likelihood that Ohlhausen, who is seen as the key to this merger either being blocked or going through, will agree with the recommendation of Lipsky, which again is to block it.

What does this mean for the future of Rite Aid being acquired? It means the current forms of the merger is likely to be blocked by the FTC and that Rite Aid shares will probably fall during this upcoming week. This might come as news to RAD longs, but not to the executives of both Rite Aid and Walgreens who seem to have acknowledged the longs odds of the merger in early June.

Another point that RAD bulls might bring up would be the plan by the company to sell off some of its stores to Fred's (FRED) in order to convince the FTC that the merger wouldn't reduce competition by a significant margin. However, the FTC is reportedly worried that Fred's does not have the market power to make up the competition that would be lost to the merger.

When one considers the worries the FTC has, the time elapsed since the FTC's review began, and the Lipsky's recommendation against the merger, the odds of the Rite-Aid-Walgreens deal going through appears very slim indeed.

Considering the merger's likely failure, RAD appears to be a risky proposition at the moment. But one man's risk is another man's potential reward, and so in the very unlikely event that this merger does go through, the upside will be significant. I'm considering buying a call option or two to play this, but am leaning against it simply due to the sheer improbability of the merger going through. I'm a contrarian, but this is looking to be too contrary for my liking.

On the discussion of Rite Aid's merits if the company were to go it on its own, which seems likely, I don't think there's much potential upside to be had, especially in the short-term. I also don't think the rumors of Amazon (AMZN) being interested if Walgreens falls through are to be believed. Ultimately, I'm expecting the current Rite Aid-Walgreens merger to fall through when the FTC sues to block it, and expect RAD to fall significantly when it happens. I also don't expect RAD to offer much value on its own merits mainly due to the company's deteriorating operating results and high debt load.

All in all, I'm bearish on RAD at current prices and see the stock as a high-risk, low-reward play considering the likely outcome of the FTC's review and Rite Aid's poor and stagnating operating performance.

If you want to stay up-to-date on my articles, you can "Follow" me by going to my author page or by clicking "Follow" at the top of this page.

Kumquat Research
11.72K Followers
To follow me click the "Follow" button! (Easy right?)Articles written and comments posted by Kumquat Research are NOT financial or investment advice, and only express his opinion. Do your own due diligence!