Just when it looked like the Rite Aid (NYSE:RAD) and Walgreens (WBA) merger was headed for failure, there was renewed hope on Monday that perhaps approval would be possible. A report from CTFN M&A Reporting claimed, citing antitrust lawyers and a former top official in the Department of Justice's antitrust department, that despite the market's expectations of failure, the merger was likely to be approved by the FTC. As one might imagine, RAD shares reacted positively: 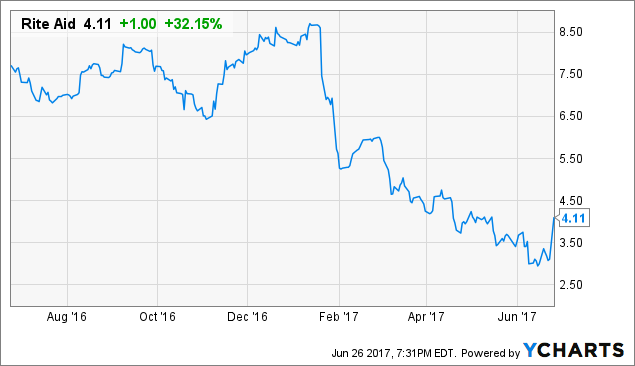 We also learned on Tuesday that the FTC commissioners plan to meet on Thursday, June 29th, to make a decision on the merger between Rite Aid and Walgreens, with a little help from Fred's (FRED).

The report from CTFN is a major curveball in this story. I wrote an article on Monday titled "Rite Aid: Merger Is Sunk," which can be read here, where I concluded that the merger was likely to fail due to the duration of the FTC's review of the merger, its request for more information in May, and the recommendation of Tad Lipsky, the head of the FTC's Bureau of Competition, that the merger be blocked. As Mr. Lipsky is a proponent of less FTC interference and fewer blocked mergers, his opposition to the merger is notable, especially considering he was personally appointed by FTC head Maureen Ohlhausen, considered to be the swing vote in this decision.

Yet, now we have a report that implies Mr. Lipsky's recommendation will be ignored and that Ohlhausen will vote to approve the merger. Quite an interesting twist three days before the FTC is scheduled to pass judgment! 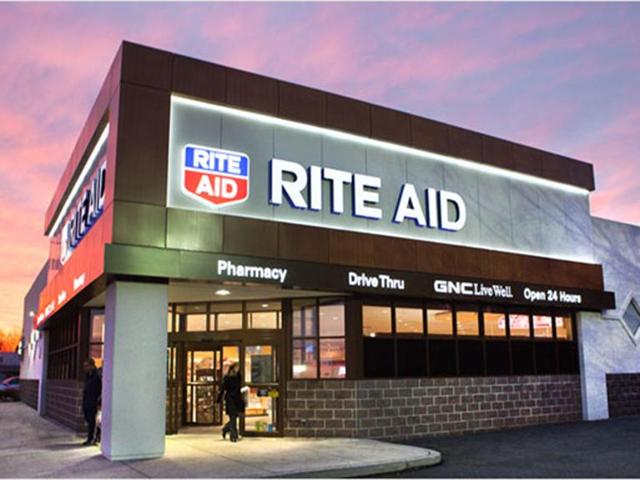 CTFN has a fairly good reputation and track record with M&A news, and I am not in a position to dispute the information passed to the organization by its sources. What this comes down to is RAD's risk-reward profile and how investors expect the decision to play out.

The upside potential is pretty straightforward, as $6.50 is the likely takeover price if the FTC were to approve the merger. The downside risk I calculated is based on the stock's forward P/E ratio, which indicates RAD shares are heavily overvalued right now if the merger were to fall through. The company is barely profitable, and margins are declining despite inorganic revenue growth in the low single digits: 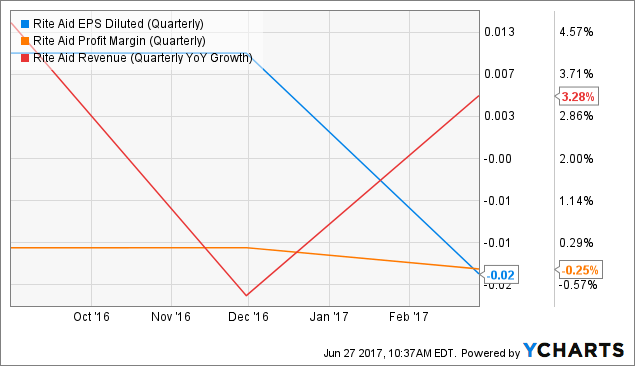 Additionally, Rite Aid owns a minimal percentage of its stores, which means there's little real estate asset value to give the stock a floor. The company's balance sheet is also a disaster, with $250 million in cash and more than $7 billion in total debt. Free cash flow is in dire straits as well: 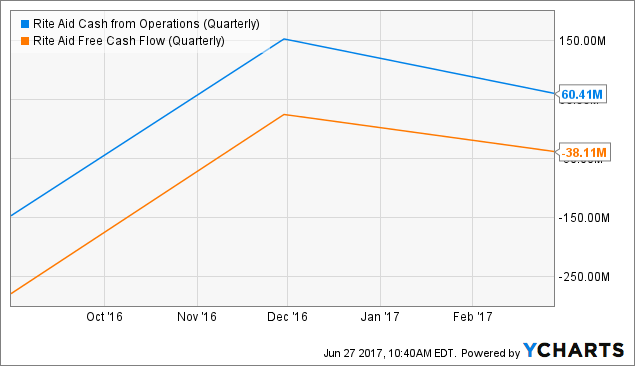 With these problems, I expect the failure of this merger to bring RAD down to below $1.50 per share. At this share price, RAD shares would be trading in line with the valuation of its peers. But considering the company' debt, cash flow, and profitability problems, I think this share price estimate might even be optimistic.

The one thing that I think can save RAD if the merger falls through is the expectation that another company could swoop in and acquire it. We'll have to wait and see on this, but I'm skeptical that a company would want to acquire a chain with significant debt and minimal cash, little valuable company-owned real estate, and a problem with just staying profitable.

Based on the information we have, I think the odds are still on the side of the merger being blocked. Mr. Lipsky's Bureau of Competition giving advice to the FTC commissioners on an issue of antitrust investigation is essentially like the Secretary of Defense giving advice to the POTUS on issues of military conflict and strategy.

If the FTC were to go against the recommendation of the Bureau of Competition, this would certainly be strange considering the entire purpose of the bureau is to inform the commissioners in matters of whether mergers would pose antitrust issues or not. In truth, I find it hard to put more faith in the words of anonymous antitrust lawyers and officials than in Mr. Lipsky's recommendation to block the merger.

Another possibility, though, is that the Capitol Forum report that Mr. Lipsky is recommending to block the merger is incorrect as well. In that case, the FTC's decision might truly be a toss-up. However, in a situation like this, making a best guess is all we can do. My best guess is, considering how long the review has taken, the request for additional information in May, and the report that Mr. Lipsky is recommending against the merger, that it will not go through. Yes, CTFN is reporting otherwise, but the sheer amount of information we have seen so far to the contrary makes it a tough sell that all of a sudden the merger is more likely to be approved than blocked.

In light of this, I am considering buying put options in the coming days to play the downside from here and to take advantage of the misplaced optimism, in my opinion, the market is experiencing.

If you want to stay up to date on my articles, you can "Follow" me by going to my author page or by clicking "Follow" at the top of this page.

Kumquat Research
11.72K Followers
To follow me click the "Follow" button! (Easy right?)Articles written and comments posted by Kumquat Research are NOT financial or investment advice, and only express his opinion. Do your own due diligence!

Disclosure: I/we have no positions in any stocks mentioned, but may initiate a short position in RAD over the next 72 hours. I wrote this article myself, and it expresses my own opinions. I am not receiving compensation for it (other than from Seeking Alpha). I have no business relationship with any company whose stock is mentioned in this article.