Today's article is something of a vent, something of a show of support for a company that doesn't require my help in the least. But consider me something of a reactionary. My writing endeavors for Seeking Alpha began as a rebuttal against an article spewing falsehoods and exaggerations by a shady, anonymous author about a company I held stock in, Ocata Therapeutics (OCAT). My intimate familiarity with the technology and news of the company gave me some leverage to write my first article.

So, in a way, I have to thank whoever it was. I don't remember their handle, because they didn't matter in the grand scheme of things.

So when it made the news rolls that Omeros Corporation (NASDAQ:OMER) was subject to a similar targeted attack, my hackles were raised. You see, these kinds of stories have consequences for the companies, for the shareholders, and ultimately for the patients who may end up having new treatment options delayed due to the company's need to focus attention on addressing complaints. Upon the release of said short attack, the company has taken a serious beating on the open market: 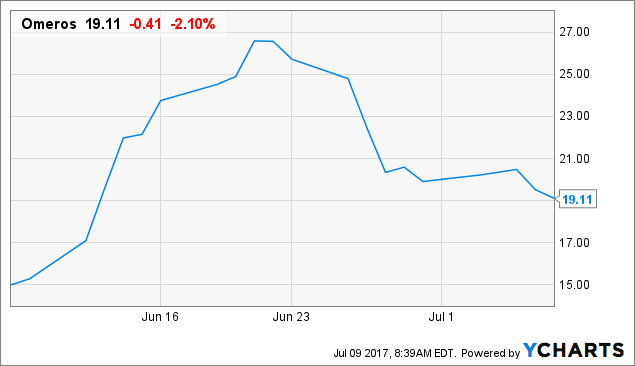 Indeed, much of the fall can probably be attributed to OMER's rise over the past few months, a simple correction of stock price brought on by over-exuberant buyers. However, one should not take lightly the power of rumor.

So today I would like to present my own analysis of the OMER pipeline. I will not be referring to the short report in question nor will I be providing a point-by-point rebuttal of their arguments, as I refuse to give liars a platform, even on my tiny sliver of the Internet.

My hope is that by adding one extra, uninterested voice to the mix (I have no holdings in OMER and do not intend to initiate holdings at this time or in the near future) that I may make a small contribution to offset the lies spewed about this company.

OMER is a pharmaceutical company involved largely in the development of therapies targeting the central nervous system. Its pipeline is deep, with a variety of agents across the developmental stages.

The only drug OMER currently has approved is Omidria, a combination of ketorolac and phenylephrine used in eye surgery to keep the pupil dilated, in addition to managing post-surgical pain. As the company's only approved agent, Omidria shoulders a heavy burden as the fundamental support for ongoing research and development.

As such, it is good news that OMER has been able to grow sales of Omidria rapidly:

From the OMER 2Q filing

Revenue from Omidria sales were increased 69% from the same period in 2Q 2016. And now the company recognizes $12.2 million in quarterly sales from its only approved agent.

Definitely not bad for a relatively small treatment space with numerous competitors.

OMER is also involved in a few phase 3 studies. The products (and their indications) are as follows:

OMS103HP is a triplet drug combining ketoprofen, amitriptyline, and oxymetazoline, which are designed to block pro-inflammatory signals at the site of surgical trauma, thus helping to prevent and relieve pain. This drug is being pursued for management of post-surgical pain relating to arthroscopic surgeries, such as ACL reconstruction and meniscectomy.

However, OMER has not provided much update on the development of this agent since top-line data in 2012 were a bit mixed. Though patients experienced improvement in pain following arthroscopic surgery, this improvement did not reach statistical significance, placing a bit of a question mark on this agent moving forward.

OMS721, on the other hand, has ascended quickly, and data have been updated several times over the past year. This drug is targeted against a protein called MASP-2, which is involved in the complement pathway, which can become dysregulated and lead to serious conditions like hemolytic uremic syndrome (HUS), which OMS721 is being tested specifically against.

Several early-stage studies have provided an encouraging glimpse into the efficacy of OMS721 in management of thrombotic microangiopathies, including HUS. The early promise of this approach led to orphan drug and fast track designations by the US FDA, which can provide an abbreviated approval pathway if the promising data bear out in pivotal studies.

Oh, right, and OMS721 is also involved in two phase 3 trials, one investigating specifically in atypical HUS and another concerning a broader range of thrombotic microangiopathies. It's important to recall that there is only one currently approved therapy to manage HUS: Alexion's (ALXN) Soliris. And ALXN commands nearly $170 million per year for its approach, so these are not low stakes.

But OMS721's exploration does not end with HUS. It is also being explored in Berger's disease, a condition where a form of immunoglobulin, IgA, collects in the kidneys and promotes inflammation, which can lead to kidney failure. OMS721 has been investigated in several forms of nephropathy, but early top-line data suggested a clinically meaningful effect for Berger's disease, leading it to focus development specifically in this indication.

Updated findings from a phase 2 trial showed that OMS721 led to a 73% decrease in the 24-hour excretion of protein. OMER believes these data support rapid development into phase 3 study.

So now it appears that OMER is placing most of its attention and resources on the further development of OMS721. And for good reason, as orphan and breakthrough designations could mean massive acceleration for the regulatory timelines through the FDA approval process.

But does it have the resources needed to get the job done?

As of its second-quarter filing, OMER maintains $51.4 million in total assets, of which $33.6 million is held as cash and cash equivalents. Its total quarterly expenditure has actually shrunk since 2Q 2016, owing to reduced research and development expenses (down to $12.2 million from $15.4 million).

Now, OMER's total operating outlay reaches nearly $25 million per quarter. However, it's important to remember that this is offset by the revenue it's seen from Omidria sales.

This means that the company has a net loss from operations of $12.7 million. Still pretty high, given the cash position, but definitely less painful than it originally looked. This gives the company just over two quarters of working capital to continue development of drugs like OMS721.

On the plus side, the total loss from operations has been cut tremendously since the second quarter 2016, from over $19 million. This signals that OMER is making the right moves to bring itself closer and closer to profitability while maintaining its promising developmental programs.

So it's important for would-be investors to keep things in perspective. The company will almost certainly need further capital to continue funding operations into 2018. This may come from some form of dilutive financing, or possibly from a partnership. Shire Group (SHPG) comes to mind as a potential partner which has dabbled in development of therapies for Berger's disease.

But it would be unsafe to assume that a savior like SHPG is forthcoming. I would be prepared to take a dilution hit, but if it achieves approval in the next few years for HUS and Berger's disease, then it's tapping into a market that currently yields one company $170 million per year, and then it's the only player in a rare disease that afflicts somewhere around 100,000 people in the United States.

Not only could it resolve a huge unmet need, but also the company could see huge financial gain from Berger's disease. Moreover, because of the breakthrough designation, OMER is now eligible for accelerated approval in this disease, greatly abbreviating the time to market.

Given that promise, the looming threat of dilution would not terrify me, to be honest.

So there is some risk involved here; OMER likely does not have the cash on hand to see its developmental drugs to market. However, it has focused its attention astutely; grown its sales of one approved drug; and gotten key regulatory designations that could greatly accelerate development.

Long story short, anyone trying to sell you fear on this is likely not operating in your best interest. The fact that the article in question was timed just as the company was experiencing a meteoric rise raises further suspicions about their motivations.

Well, from a scientific perspective, OMER looks quite promising, as it is poised to address some serious unmet needs. It's hard enough to move these drugs to the clinic without parasites latching on and trying to make a quick buck on bleeding a company dry.

And unfortunately this is a pretty common occurrence in the realm of speculative biotech, where emotions run high. But intrepid, smart investors can sidestep these charlatans by remaining cool and analytical. As I've written about before, getting past your own fear is a big step in getting "lucky" with your investments. And I wish all the best of luck, and I hope that OMER can bring these therapies to clinic and help patients.

Thank you for taking the time to read this article! It was a quick rundown of the OMER approach to serious diseases, but I hope you found it helpful nonetheless. If you enjoyed it, I also hope you'll consider becoming a follower of mine on Seeking Alpha, as this will allow you to receive real-time email updates when new articles of mine go live, including my daily series entitled "3 Things in Biotech You Should Learn Today," which is designed to help biotech investors unearth new opportunities.

Have a great day!

Zach Hartman
8.63K Followers
I am a former PhD scientist-turned-writer focused on cancer education. My writings in Seeking Alpha have been devoted to helping people identify promising investment opportunities in cancer research through commentary of recent events. Readers can learn more about other aspects of cancer research by visiting my site Invest Against Cancer.I also collaborate with Avisol Capital Partners on their Marketplace service known as the Total Pharma Tracker (TPT). Some of my work will be available to TPT subscribers either exclusively, or in advance. If you are interested, please click the link above!
Follow