Are you interested in high-yield niche plays with strong earnings records? Then maybe you should book a passage on KNOT Partners LP (NYSE:KNOP), a niche shipping stock we've covered previously in several articles.

Profile: KNOT Offshore Partners LP owns and operates shuttle tankers under long-term charters in the North Sea and Brazil. The company provides crude oil loading, transportation, and storage services under time charters and bareboat charters. KNOT Offshore Partners GP LLC serves as the general partner of the company, and Knutsen NYK Offshore Tankers AS is its sponsor. The company was founded in 2013 and is headquartered in Aberdeen, UK.

Management has grown KNOP's fleet rapidly since the 2013 IPO - it started with just four vessels, and now, after the latest drop-down acquisitions in 2017, it has 13 vessels (225% asset growth in four years).

Shuttle tankers comprise only around 1% of the world's conventional tanker fleet, but they're an important link for oil companies - many ports don't have the infrastructure to accommodate large tankers, so KNOP's customers charter its shuttle tankers to get their oil into port. These are specialized vessels, which take 2.5-3 years to build, so there isn't a lot of speculative newbuilding going on in this industry.

KNOP has another advantage - a young fleet - its fleet of 13 vessels has an average age of 4.6 years vs. an average of around 12 years for the rest of the industry's shuttle tankers.

Like many of the companies we cover, KNOP operates on long-term contracts, with strong counter-parties, such Royal Dutch Shell (RDS.A) (RDS.B), Exxon Mobil (XOM), and Statoil (STO), among others. Currently, it has an average of 4.8 years duration left, with an additional four-plus years of option extensions: 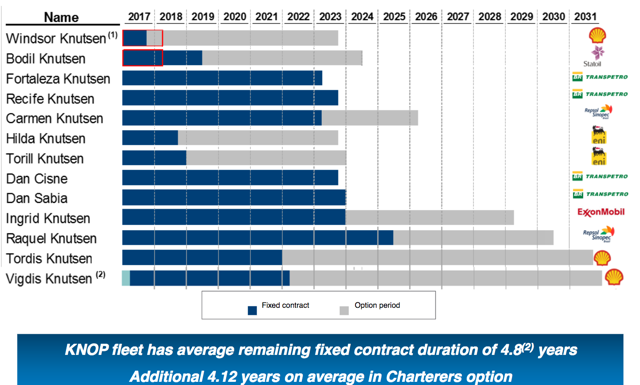 2 New Assets: On 3/1/17, management completed its acquisition of the ownership interests in the company "KNOT 24" that owns and operates the shuttle tanker Tordis Knutsen for a purchase price of $147M, less $137.5M of outstanding indebtedness, plus approximately $21.1M for a receivable owed by Knutsen NYK to KNOT 24. On the closing of the acquisition, KNOT 24 repaid approximately $42.8M of the indebtedness.

The Tordis Knutsen is operating in the Brazil under a five-year time charter with a subsidiary of Royal Dutch Shell, which will expire in the first quarter of 2022. The charterer has options to extend the charter for two five-year periods (Source: KNOP site).

- In a second, similar deal, management completed the acquisition of the ownership interests in the company that owns and operates the shuttle tanker Vigdis Knutsen (KNOT Shuttle Tankers 25 AS “KNOT 25”) for an aggregate purchase price of $147.0M less $137.7M of outstanding indebtedness plus approximately $17.9 million for a receivable owed by Knutsen NYK to KNOT 25, and approximately $0.9M for certain capitalized fees related to the financing of the Vigdis Knutsen.

The Vigdis was delivered in February 2017. The vessel is operating in Brazil under a five-year time charter with a subsidiary of Royal Dutch Shell plc, which will expire in the second quarter of 2022. The charterer has options to extend the charter for two five-year periods.

Distributions: Like many MLPs, KNOP pays in a Feb-May-Aug-Nov cycle. Management should be declaring the next distribution in the next few days, and it should go ex-dividend soon, around 8/1/17.

KNOP paid its first full quarterly distribution of $.435, and gradually increased it to $.52 by October 2015, where it has remained. Management noted on the earnings call that:

"Since our initial IPO over four years ago, we have now declared and paid common unit distributions of $7.7 so our initial investors have received a total return of 37%."

"The Partnership has elected to be treated as a C-Corporation for tax purposes - (our investors receive the standard 1099 form and not a K-1 form)." (KNOP site)

KNOP has had an average of 1.18x DCF/distribution coverage since its IPO. Uncharacteristically, its coverage dipped below 1x in Q1, due mainly to a lengthy scheduled offhire, and timing issues.

Management explained on the earnings call that:

"The coverage ratio has reduced primarily due to the equity being raised before assets are dropped into the MLP, effectively what we call an equity overhang."

Options: KNOP's covered call yields aren't that compelling at the moment, but you can see details for over 25 other income-enhancing trades in our Covered Calls Table and also in our daily Cash Secured Puts Table.

Q1 had larger EBITDA and DCF shrinkage vs. Q4 '16 in addition to a large net income decline. The culprit?

"The Windsor went through a special second survey, which is the 10-year one in drydocking at Brest shipyard in France. Off-hire in relation to the special survey was completed in 54.1 days, because the vessel undertook lengthy ballast legs from Brazil to France back. The Vessel was back on-hire under a Shell time charter from April 4th."

In addition, there were timing issues - although the Raquel vessel was in use the whole quarter, it only had use of the Tordis vessel for one month in Q1, but still had the added expense attached to it.

"Vessel operating expenses for the first quarter of 2017 were $10.3M, an increase of $2.6M from the fourth quarter of 2016. The increase was mainly due to Raquel Knutsen and Tordis Knutsen being included in the fleet commencing 1st December and 1st of March, respectively."

"Realized and unrealized gain on derivative instruments was $0.5 million in Q1 compared to $4 million in Q4." (Source Q1 '17 earnings call) 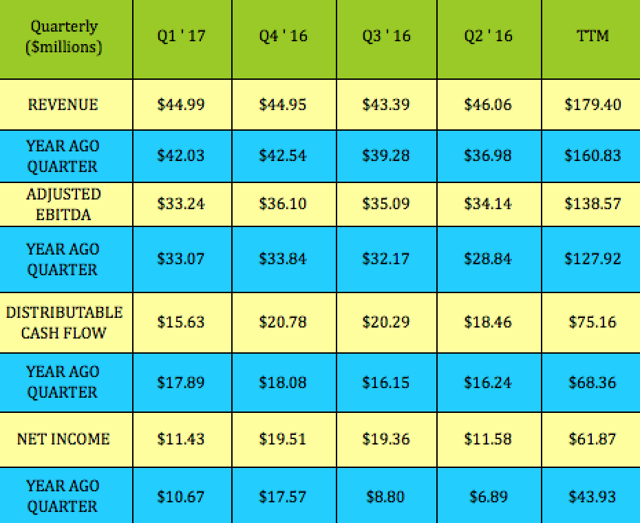 Unit count has gone up ~8% over the past four quarters. On January 10, 2017, the Partnership sold 2.5M common units in a public offering, raising approximately $54.9M in net proceeds. However, distribution coverage was slightly higher, at 1.2x, while revenue, EBITDA, and DCF all had good gains.

Looking forward, management was upbeat on the call: 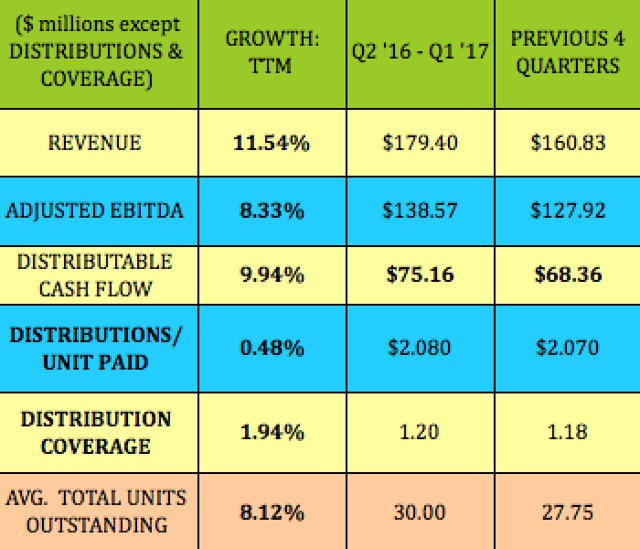 "The Partnership expects to receive options to acquire two additional vessels owned by Knutsen NYK pursuant to the terms of the omnibus agreement entered into in connection with the Partnership's initial public offering ('IPO'). As of March 31, 2017, the average remaining fixed contract duration for the two vessels is 5.0 years. In addition, the charterers have options to extend these charters by 10.5 years on average. We do expect that we will add to the drop down inventory during the year." (Source: Q1 earnings call) 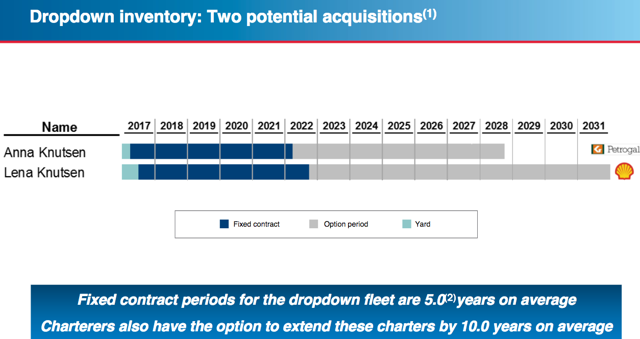 KNOP's vessel, the Windsor Knutsen, has been on a two-year contract from October 2015 with Brazil Shipping, a subsidiary of Royal Dutch Shell. There are six years of extension options, and Shell will declare in July whether it wants to continue with this low cost area. Management said on the Q1 earnings call that "we are in talks with Shell. So they will inform us in July whether they will use that first option to extending charter."

If Shell doesn't pick up the extension option, management will have to find another charterer for this vessel. However, KNOP's sponsor, NYK Knutsen, has guaranteed the income of the Windsor until April 2018, which gives management some leeway.

On the Q1 '17 earnings call, management commented on the other two vessels:

"Hilda and Torill - the good thing about those two ships is they’re really specialized, I mean you just can't replace them without - you have to construct any vessels and this is going to take 2.5 to 3 years."

Management sold a total of 4.1M preferred units in two private placements in February and May (more details are in the Debt section near the end of this article). Its Q1 presentation states that "coupon for the preferred equity is deducted from the available DCF."

These 8% (~$2/unit annually) preferred distributions will take seniority over common units in any liquidation scenario, in addition to lessening the amount of DCF available to pay common unit distributions, by around $2M/quarter. KNOP has averaged ~$19M in DCF/quarter over the past four quarters.

However, its new assets' earnings contributions should more than compensate for this in Q2 and beyond.

At $23.00, KNOP is currently just about even with analysts' average price target of $23.06. If Q2 pans out as management expects, we may see price targets raised - it reports Q2 earnings in August.

Valuations: As the shuttle industry is small, there really aren't many other pure-play firms to compare KNOP to. However, Teekay Offshore Partners LP (TOO) is very active in the shuttle business.

For the most part, if you just looked at this comparison, you might jump out of your seat, and hit "buy" on your terminal, looking at TOO's valuations. Other than price/book, TOO is a whole lot cheaper than KNOP.

KNOP's price/DCF of 9.21 isn't remarkably cheaper than many of the other types of shipping stocks we cover, which are running from around 7 up to around 10.5. The denominator of this ratio will improve in Q2 and Q3, though, given the effects of the new assets kicking in.

Its price/book of 1.21 is a bit cheaper than many of the shipping stocks we follow however.

Debt and Liquidity: Management was very active in Q1, raising $145M in new equity and $100M in long-term debt.

It refinanced the Hilda Knutsen vessel, replacing a $75.6M loan that was due on August 2018, with a new $100M loan due on 2022 from Mitsubishi UFJ Lease & Finance, reducing the loan margin by 30 basis points.

On May of 16th, it reached an agreement for a third private placement to sell an additional 1.667M Series A units. This is expected to close by 30th of June 2017 with net sale proceeds of around $38.8M.

In the second half of 2017, it plans on refinancing the next two maturities, for the Torill and Ingrid vessels, which come due in October and December 2018.

Another strength for KNOP is that the company has access to a large array of lenders, as listed below: 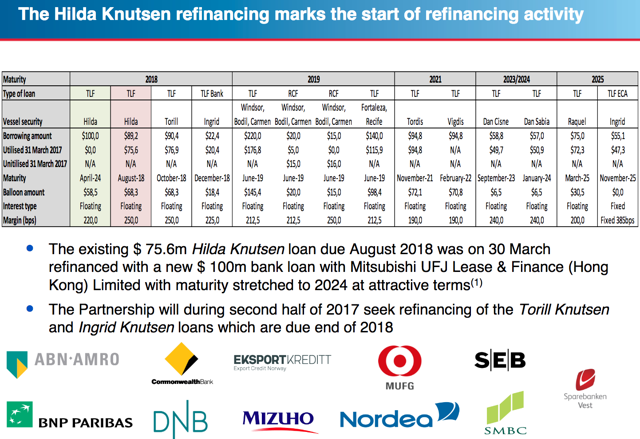 At the end of Q1, we had solid liquidity position with cash and cash equivalents of $34.9 million and an ongoing undrawn credit facility of around $30 million. These hopefully can be utilized to acquire further vessels in addition to Vigdis before the end of 2017 to further build the MLP." (Source: Q1 '17 earnings call)

Summary: We reaffirm our long-term buy rating for KNOP, based upon its strength as a niche player, its attractive yield and coverage, its ongoing asset growth, and management's continuing success with refinancing its debt.

All tables furnished by DoubleDividendStocks.com unless otherwise noted.

Disclaimer: This article was written for informational purposes only and is not intended as personal investment advice. Please practice due diligence before investing in any investment vehicle mentioned in this article.

Disclosure: I am/we are long KNOP, XOM, RDS.B. I wrote this article myself, and it expresses my own opinions. I am not receiving compensation for it (other than from Seeking Alpha). I have no business relationship with any company whose stock is mentioned in this article.