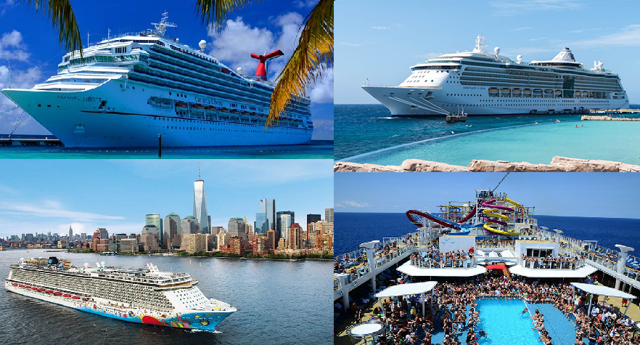 Cruising is a $34 billion industry and rapidly growing. According to the Cruise Lines International Association, the demand for cruising increased by 62% in the ten-year period spanning from 2005 to 2015. And between 2008 and 2014, cruise travel outpaced general leisure travel in the US by 22%, while a recent poll revealed that 48% of non-cruisers expressed interest in taking an ocean cruise.

Just 3 companies control 85% of the global cruise market share. In order of largest to smallest, they are CCL, RCL, and NCLH. CCL is twice the market capitalization of RCL and almost four times the size of NCLH. CCL carried 48% of global cruise guests in 2016 and holds significant market share. 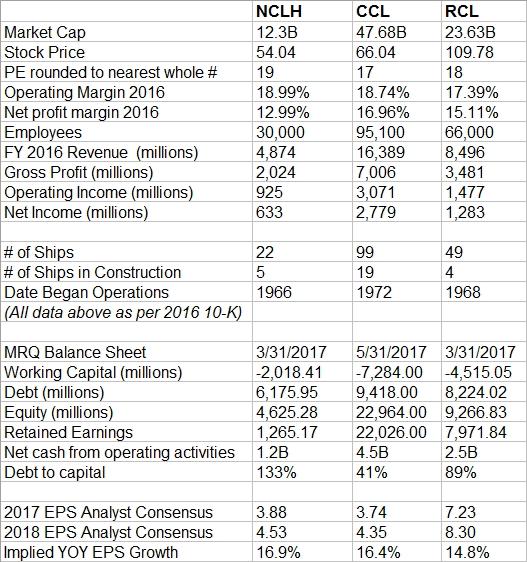 Recommendation: Buy NCLH, CCL, or both. Although RCL is also a fairly-priced stock in a growing industry, I see more upside from buying shares of either CCL or NCLH, since they sport better margins. However, spreading capital between the three companies is a reasonable course of action. To investors already holding stock in any of the 3 companies, I cannot quantify any reasons to sell shares of any of the three companies at this time.

- RCL, price target $121.50 which is 11 percent upside from $109.78. (Depending on the broad market, RCL can command a higher valuation, but I am less confident about that than I am with NCLH and CCL, which I believe can outperform the broad market.)

Thomson/Verus: All 3 cruise companies have a rating of 10 on Thomson Reuters, the highest rating possible. NCLH and CCL have a 9 rating from Verus and RCL has a 6 rating. [As a side note, backtesting over the recent years has showed that Thomson Reuters/Verus recommendations led to superior annual returns for "longs" compared to other research firms. (Source 1, Source 2). So to those that have a subscription, I am simply calling attention to the fact that NCLH and CCL are currently rated very highly by a solid research firm.]

1. The cost-to-value proposition of a cruise is becoming apparent to more and more customers evidenced by the following:

c. 48% of non-cruisers expressed interest in taking an ocean cruise.

2. The consumer trend of "experiences over things" bodes well for the cruise industry.

I personally bought NCLH rather than choosing to diversify between 2 or 3 companies, although CCL would have been an equally good buy in my opinion. Here are my reasons for choosing to buy NCLH:

- With 5 new ships currently being built and only 22 currently in operation, there is more relative upside to be had from those new ship constructions than CCL who has 99 ships and 19 ships in construction. Mathematically, this would expand NCLH's fleet by about 23% and CCL's by about 19%, a 4% difference in favor of NCLH.

- NCLH does not pay a dividend which is better for growth investors looking to profit from capital appreciation. The dividend yields for CCL and RCL at these prices are not significant (both under 3%) compared to other choices in the market, such as REITs.

CCL is an equally good choice. As far as balance sheets go, CCL has the strongest balance sheet and therefore the most financial flexibility while NCLH is the most highly leveraged between the 3 companies. CCL has the best debt-to-capital ratio, and its size also grants it some financial advantages over competitors.

Overall, growth in these companies will be driven by increasing demand which would be capitalized on by these 3 companies by the building of new ships which should easily meet the demand. Cruises have become more prevalent and affordable and the value received per dollar on a cruise is significant when compared to a regular vacation of similar travel distance, accommodation, dining, entertainment, and amenities.

- Despite the great value that travelers receive when going on cruises and the increasing affordability of them, cruising is still a once-a-year luxury for most. In any economic downturn, most households will likely cut-out a vacation cruise from their budget before cutting anything else. Even without an economic downturn, if discretionary income is diverted to alternative choices for vacations, getaways, and entertainment, that

- NCLH's chart may look "toppy" or appear to have limited in upside to chartists on the weekly, especially to technical traders looking to play resistance and support. However, new ship builds should serve as a strong catalyst for higher highs, not to mention growing popularity towards cruises as mentioned earlier in the article.

- Any future regulation of the cruise industry could hurt profitability, especially in regards to wages (a perfect example of geo-arbitrage), taxes, etc.

In 2012 and 2013, CCL suffered two back-to-back disasters: (1) the toppling of the Costa Concordia off the coast of Tuscany which killed 32 and injured 64, and (2) a maintenance oversight on the Triumph which caused a generator fire that knocked out the ship's power, which subjected over 4,000 passengers to miserable conditions for four days on the Gulf of Mexico.

Although minor mishaps happen every now and then with all cruise lines, these incidents were relatively recent, substantial, and undoubtedly hurt CCL's reputation.

Over the years I thought it would be interesting to see if competitors would be able to take market share from CCL due to the incident, especially from "on-the-fence" and less loyal cruisers. With that, I kept my eye on CCL's annual market share metrics over time:

Approximately 4 years later, I concluded that these disasters clearly did not affect CCL's market share. This is a testament to the strength of the industry, the growing eagerness of vacationers to go on cruises, and CCL's ability to bounce back from a crisis. Whether it's because of the introduction of the "Great Vacation Guarantee", smart promotional strategies, or the relative nonchalance by most cruisers and potential cruisers to the incident (not to mention the growing demand for cruises) Carnival was able to keep its market share. I still plan to keep track of this metric over time although it is clear that Carnival will remain the leader. [Interestingly enough, Disney (DIS) currently has 4 cruise ships of its own, another testament to the obvious growth trajectory of the cruise industry]. Still, the industry is dominated by the Big 3, and although competition is fierce, there is more than enough demand and growing demand for the Big 3 to coexist for now.

This concludes my macro view of the cruise industry for the summer, a comp of the Big 3, and my reasons for buying shares of NCLH. Please remember to do your own research as well and to delve deeper into the companies before making an investment for yourself, keeping in mind to factor in risk management and if the investment idea suits your own investment strategy. Thanks for reading.

Disclosure: I am/we are long NCLH. I wrote this article myself, and it expresses my own opinions. I am not receiving compensation for it (other than from Seeking Alpha). I have no business relationship with any company whose stock is mentioned in this article.