My wife and I were on vacation last week, eating breakfast at an Interstate hotel in southern Wisconsin. She read me a line from a USA Today story: "Social Security benefits projected to rise 2.2% in 2018."

"What?" I nearly spit out my artificially-processed scrambled eggs. "How can that be? Inflation is running at 1.6% and we're only halfway into the year. Wouldn't this number come out in October or December? How can it be 2.2%?"

The article noted that the 2.2% number was a projection by the Social Security trustees, but that "officials will release the official cost-of-living increase for Social Security recipients in October."

So I realized I had a lot to learn about Social Security and its annual cost of living adjustments (COLAs). My wife and I aren't collecting Social Security yet, but I do track inflation every month. I wanted to know more.

Social Security COLAs are based on the Consumer Price Index For Urban Wage Earners And Clerical Workers, otherwise known as CPI-W. It is similar to CPI-U (the "headline" inflation that you read about every month) but includes information only from households with at least 50% of the household income coming from clerical or wage-paying jobs.

CPI-W isn't widely tracked, but the Bureau of Labor Statistics does update the index each month in its overall inflation report. In June, for example, the index was set at 238.813, for a 12-month increase of 1.5%, a bit lower than overall U.S. inflation.

I repeat: CPI-W increased 1.5% over the last year, less than overall inflation. Hard to see where we are heading toward a 2.2% benefits increase in 2018, but my research continues ...

The Social Security Administration doesn't look at a full year's data to determine the COLA. Instead it uses the average index for the third quarter - July, August and September. Here is the language from the SSA site:

A COLA effective for December of the current year is equal to the percentage increase (if any) in the average CPI-W for the third quarter of the current year over the average for the third quarter of the last year in which a COLA became effective. If there is an increase, it must be rounded to the nearest tenth of one percent. If there is no increase, or if the rounded increase is zero, there is no COLA.

This is interesting wording, because it means that the SSA eliminates years where inflation was zero or negative, meaning there won't be a "bounce-up" effect on benefits after a year of deflation. Instead, it goes back to the last year where there was an increase in benefits.

Here are some historical numbers and my analysis of the current year's trend: 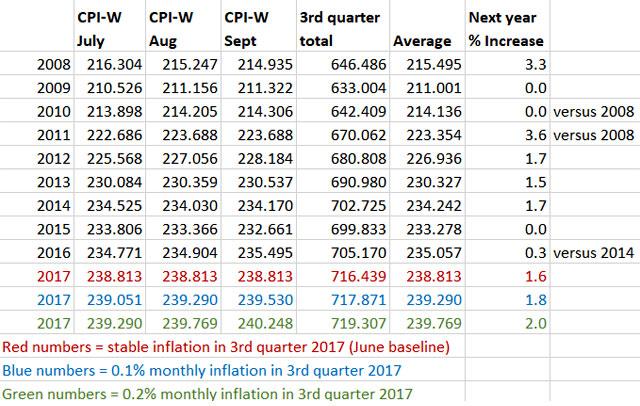 So why did we get a slew of news reports last week predicting a 2.2% increase in Social Security benefits in January? (Even the AARP reported the projection). The SSA trustees did issue their annual report on July 13, and it included projections that showed 2.2% as a "medium" outlook for the January COLA. But keep in mind that these projections were made before the third quarter began. There isn't a single data point to support that projection. And if you follow inflation like I do, you know how unpredictable it can be from month to month. 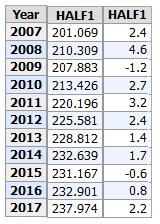 Digging deeper into SSA data, I found a chart showing the half-year average CPI-W inflation numbers, which were up 2.2% in the first half of 2017. Interesting, but the COLA is based on inflation in three months - July, August and September - that aren't in the first half of the year. So that number is irrelevant.

I'd admit that the COLA could end up being 2.2% in January 2018, or it could be lower. Or even higher. I'll also note there are no data - at this point - to support an accurate projection. We're going to need to see inflation numbers for July, August and September.

The SSA says it will release the official number in October. I can tell you the exact date and time: Friday, October 13 at 8:30 am. That's when the September inflation numbers will be released and then - and not until then - we will be able to say with confidence what the January 2018 COLA will be.