The combined market value of Facebook (FB), Amazon (AMZN), Apple (AAPL), Netflix (NFLX) and Alphabet (GOOG) (GOOGL) - the so-called FAANG stocks—have increased by about $600 billion year-to-date. This means the five stocks account for about 35% of the S&P’s $1.7 trillion overall market gain to date, according to S&P Capital IQ data. The five stocks have a trailing twelve-month average price-earnings ratio of 103.38 with a range on the high end of 229.93 [NFLX] and a low of 17.58 [AAPL] and a median reading of 43.50 [FB], according to the Wall Street Journal calculations through Friday's market close.

Value indices across the equity spectrum have underperformed the Benchmark as have dividend stocks. In the international realm, the iShares MSCI Emerging Markets (EEM) is up 17.61%. EEM's correlation with XLK is now 96% as the big driving force for the ETF is technology and the surging shares of Taiwan Semiconductors (TSM) and South Korea’s Samsung Electronics (OTCPK:SSNLF). International stocks ($DJW) are up 9.51% through Friday’s market close (see Figure 1, below). Historically, markets driven by a small number of issues with outsized price/earnings ratios means trouble is not far afield. Trouble? 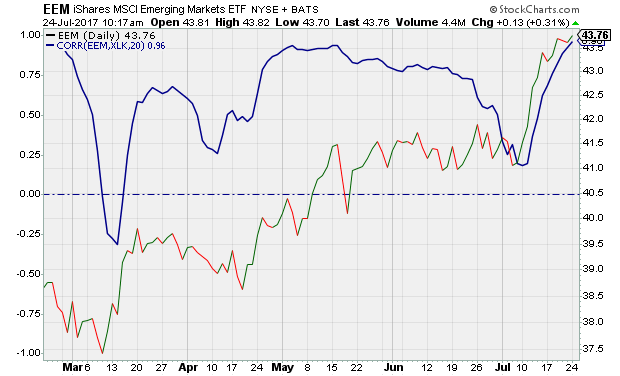 A recent annual survey by the Bank of America of 211 institutional money managers overseeing $610 billion in assets found that only 8% of such managers thought the global economy would expand over the next 12 months, the lowest growth level since 2012. That said, only 12% thought a recession would break out in the next 12 months. A long position on the US dollar remains a crowded trade but uber-bullish positions appear to be on the wane.

Cash positions are at 5.4%, the highest level since 2009 with a full 39% of participants acknowledging an overweight cash position. Capturing the early spurts of European growth and riding the interminable flows pumped in the Japanese economy by the Bank of Japan continue to be the most widely held positions. Emerging markets continue to tighten in anticipation of Federal Reserve monetary tightening.

Curiously, the VIX closed at a reading of 9.36 - its lowest close since posting a reading of 9.31 back on 22 December 1993. This could mean one of two things: Fund managers are not really worried about markets going off the deep end in the short or medium term or the VIX is no longer reflective of market angst, arguably due to collateral distortions emanating from monetary policy since the Great Recession of 2007 - the Yellen put.

Figure 2 (below) cuts a rather interesting picture of the S&P 500 volatility over the course of the past 10 years. The first frame records 5% directional market moves over the period. Such market moves are graphically portrayed in tight zig-zag configurations through 2012, well past the official beginning of the official recovery period in June 2009. The S&P 500 trough of 676.53, posted on the 9th of March 2009 marks the bottom of the market.

The Fed’s first of three large-scale asset purchase (LSAP) programs had just been announced at the December 2008 FOMC meeting. By the end of the 1st quarter 2009, the Fed’s balance sheet had increased from $897.96 billion on the 4th of January 2007 to $2.11 trillion. The Fed’s balance sheet would more than double to $4.55 trillion through the end of December 2014 before bringing its asset purchase programs to a full conclusion. 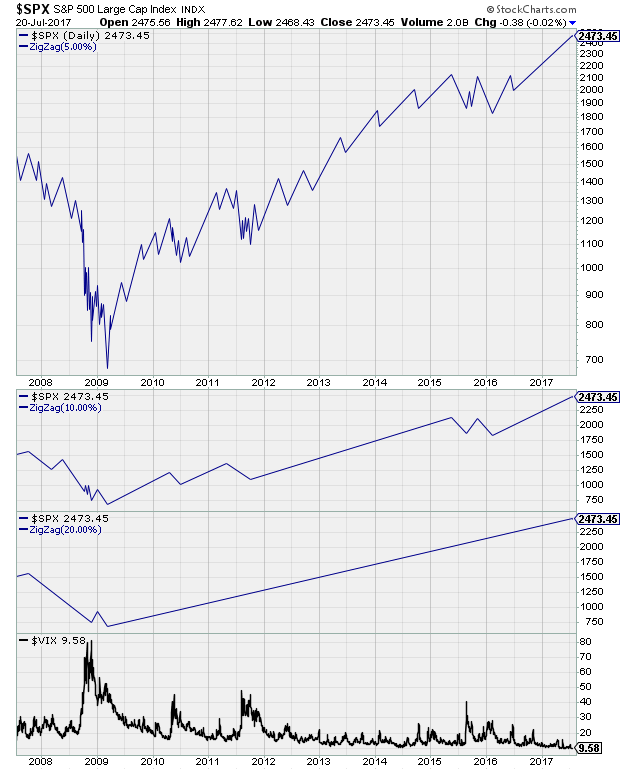 The second frame of Figure 2 (above) traces the S&P 500 benchmark by 10% market moves in either direction. The number of such moves reduces to a handful since 2009 and nothing since early 2016.

The third frame of Figure 2 (above) traces 20% market moves in either direction for the Benchmark. The last 20% market move for the S&P 500 benchmark was back in 2009. 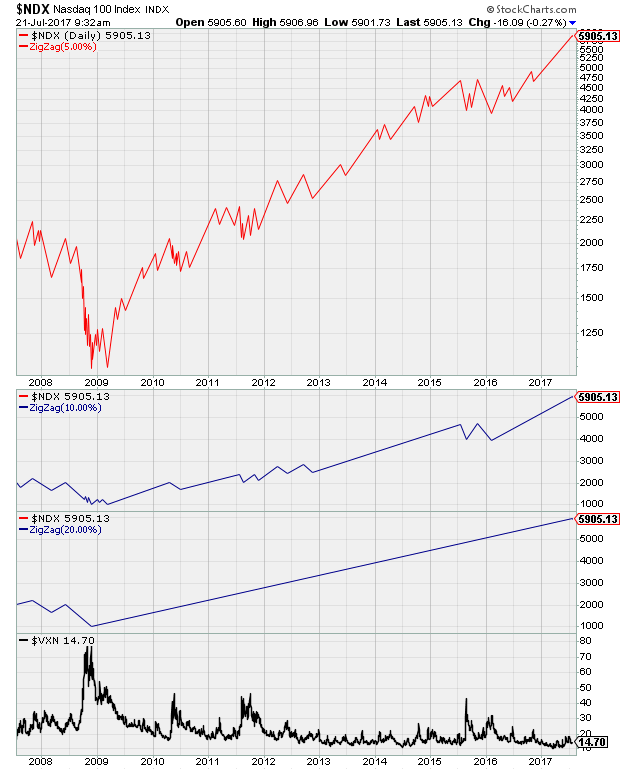 The Nasdaq composite (see Figure 3, above) pictorially paints a strikingly similar pose over the 10-year period, even though the 100-stock composite shoulders a greater potential volatility exposure due to both size and composition. Beneath the surface however, the average reading of the VXN is 25.14 as a result, almost six points or 29% higher than the VIX average reading of 19.54 on data back to January 1990. (The data series for the VXN goes back to January 2001.)

The high-low range compares closely with the 80.96 and 13.45 of the VIX. The Nasdaq composite has not experienced a 5% move in either direction since the election cycle of 2016. 10% moves portrayed in the second frame are few and far between with the last incidence happening in the 3rd and 4th quarters of 2015.

Meanwhile, the last 20% directional move for the Nasdaq was in 2009. The Nasdaq composite’s volatility measure through Friday’s market close was 14.70 - 54% higher than the VIX for the largest spread between the two measures since 2003. All of this leaves precious little room for earnings disappointments, to which Tesla (TSLA)’s 2nd quarter production shortcomings readily attest. Trouble?

The days of large scale asset purchase programs are drawing to a close as almost all of the major central banks of the world - with the sole exclusion of the Bank of Japan - turning hawkish in their forward guidance over the past month. While the reasoning varies from jurisdiction to jurisdiction, improving economic fundamentals and decreasing unemployment top the list. A continuing glut of crude on world oil markets dampen prices across global supply chains and retail shelves.

At first glance, prevailing inflation measures should preclude any further increases in borrowing costs by central banks with perhaps the exception of the UK where Brexit distortions have caused British asset prices to fall and foreign denominated goods prices to rise sending inflation to some of the highest levels in the developed world. The 2-year and 10-year Treasury spread continues to lag at 89 basis points through Friday’s market close, well below both the CPI and PCE headline rates, which would traditionally push further cuts in the federal funds rates well into the future. But history has not turned out to be a reliable reference point in the LSAP era. Other concerns have percolated to the surface - namely the collateral effects of uber-loose monetary policy over the past decade.

The S&P 500 is up 265.47% since hitting its low of 676.53 on the 9th of March 2009 in the darkest throes of the Great Recession of 2007. Likewise, the Nasdaq composite hit its low of 1528.59 in early January of 2009 and is up 317.89% through Friday’s market close. Large scale asset purchase programs kept the economy from falling off of a cliff by reflating assets through debt issuance with share prices being the most readily visible play.

That said, the world ushered in by LSAP has stood many traditional investment strategies of old on their heads: Investors bought bonds seeking capital gains and equities for yield. Asset purchases enriched the owners of capital by lowering borrowing costs to never-before-seen levels while leaving those without access further impoverished. An asset rich wage poor recovery resulted, broadening the gap between haves and have nots, financial markets from the rest of the economy.

The fallout has become politically toxic in progressive opinion circles throughout the developed world, underscored by successful populist push-backs in the UK and US and near-misses in the Netherlands and France. In Italy, the jury remains in deliberation. The reverse play of normalization will make traditionally risk-free, safe harbor assets volatile as traditional negative correlations between risk-free and risk-laden assets flip positive - a flip that is already evident with the current correlation between crude oil prices and inflation (see Figure 4, below).

The flip will make the poor richer as the assets left for dead under current conditions gain outsized market favor as borrowing rates begin to rise. The bloated and famously inefficient banks of the eurozone that have carried valuations below their book value since the crisis could come into play. Perhaps even Greece will become less of a moon-shot. At the same time, the rich become poorer as investments purchased in a zero-bound environment shed their outsized capital gains as asset prices fall across the greater economy. The flip will likely spook markets as volatility returns in force. 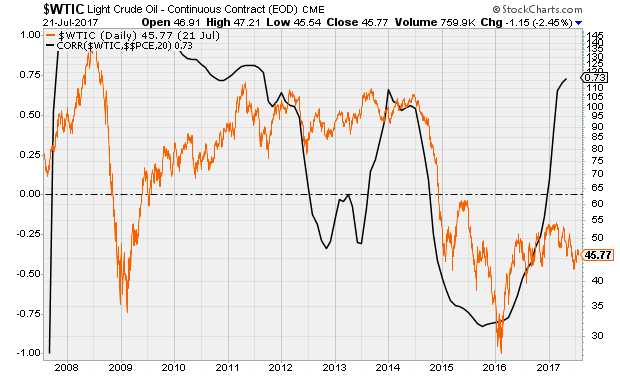 The Federal Reserve has promised investors several things in regard to its normalization program: The timetable will be long and the pace painstakingly slow - akin to watching paint dry, giving markets presumably ample time to adjust. Time will tell. In the meantime, a long position on both the VIX and VXN remains appropriate.

Disclosure: I am/we are long UVXY. I wrote this article myself, and it expresses my own opinions. I am not receiving compensation for it (other than from Seeking Alpha). I have no business relationship with any company whose stock is mentioned in this article.