It has become fashionable during the recovery from the Great Recession to complain about the misleading nature of the widely-circulated U3 unemployment rate. The argument is that the employment situation is far worse than believed because people are so discouraged with the labor market that they have given up looking for work. This shift can be seen in the declining labor force participation rate, down a dramatic 3.2% over the past ten years. Considering this change, it seems almost conspiratorial that the Federal Reserve believes we are near full employment and is looking to increase interest rates.

Look at the employment-population ratio over the past ten years: 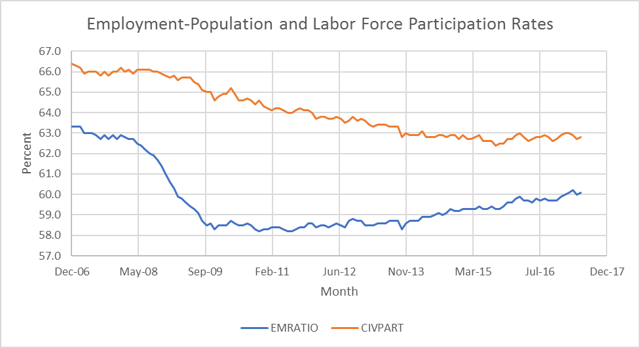 On closer inspection, however, the falling labor force participation rate is likely more a sign of shifts in society than a result of poor economic performance. And I am not just talking about demographic shifts, such as the baby boomers reaching retirement age, which account for roughly half of the decline in labor force participation, or for that matter, the increased popularity among students of staying in school longer before entering the labor force, which explains 0.2% of the change. It’s possible that fewer people are participating in the labor force simply because fewer people want to work. 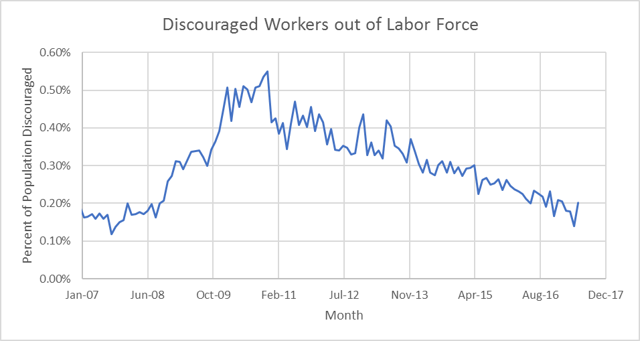 The graph shows that we are nearly back to pre-recession levels of the proportion of civilians out of the labor force because of discouraging job prospects. Seven years ago, this rate stood at 0.17%. Today, it is 0.20%. While many workers left the labor force during the recession because of discouragement, that is not the case anymore. It would seem, then, that we are near full employment. However, there are a multitude of reasons why workers would leave the labor force, from the opioid crisis to a skills mismatch creating the need for workers to get more educated. 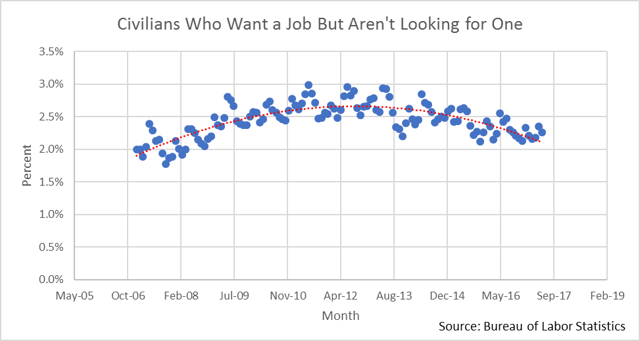 The frowny face the graph portrays is much as we would expect from an economy that plunged into recession and is now recovering. It lets us get a better sense, though, of how close we are to pre-recession levels. Ten years ago, the proportion of civilians who were out of the labor force but wanted a job was 2.3%, the same as it is today.

It becomes clear, then, that labor force participation is low not because of the economic situation but because people don’t want work anymore. There are many theories about why this is the case. One is that with stagnant wages and rising child care costs, parents are often choosing to stay home instead of working. Since these parents are still mainly females, it helps account for the post-recession decline of labor force participation among the group even while service sectors hiring greater proportions of females such as health care and leisure and hospitality outpace national employment growth. Meanwhile, the fall in male labor force participation has been occurring for the past five decades and thus is largely linked with long-term economic shifts mainly the declining employment in goods-producing sectors, namely manufacturing. This is not to mention other recent factors that have accelerated this decline, such as the rise in men on Social Security disability insurance.

All of this is indeed a bad sign for the economy, as common concerns about lower growth rates and a smaller tax base are well-founded. It is possible for fiscal policy to arrest this decline somewhat—through policies such as child care tax benefits and investments in developing the labor force’s skills—but since this shift is caused mainly by long-term cultural and demographic changes, there is nothing monetary policy can do to combat it. As a result, the contention that the economy is near full employment is not only warranted, it is the Fed’s modus operandi. Thus, any investor who believes the Fed will normalize interest rates more slowly due to the low labor force participation rate is misguided. The low U3 unemployment rate masks an ugly truth about the economy, but it is a truth the Fed should ignore.

Shlok Goyal
13 Followers
I am an economics student who became extremely interested in monetary policy after competing in the Federal Reserve Bank of New York's Fed Challenge. As a result, I primarily look to forecast macroeconomic indicators to devise the best course for policy as well as to predict stock market trends. While investing, I primarily look to find value in technology and energy companies. I focused on the technology and telecom sectors as an analyst in the Carnegie Mellon Tartan Student Fund.
Follow