ETFGI, a leading independent research and consultancy firm on trends in the global ETF/ETP ecosystem, reported today that assets invested in ETFs/ETPs listed in Japan have increased by 26.7% from $173.30 Bn to reach a new record of $219.60 Bn in the first half of 2017, according to ETFGI's June 2017 Japanese ETF and ETP industry insights report, an annual paid for research subscription service.

(All dollar values in USD unless otherwise notes.) 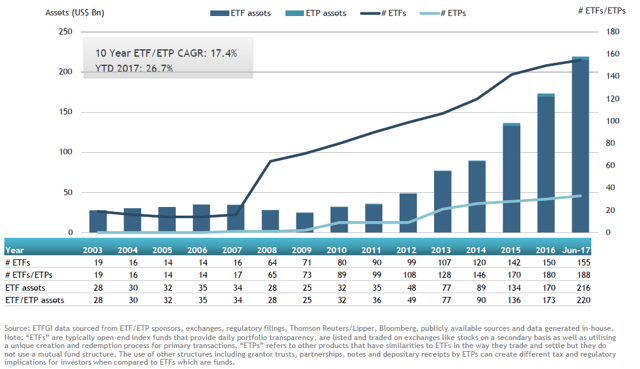 At the end of June 2017, the Japanese ETF/ETP industry had 188 ETFs/ETPs, with 233 listings, assets of $220 Bn, from 21 providers listed on 2 exchanges. According to Deborah Fuhr, managing partner at ETFGI:

"Equity markets have performed well in the first half of 2017: the S&P 500 gained 9.34%, international equity markets outside the US were up 14.27% and emerging markets were up 16.69%. Political risks remain a focus for investors - the ability of the Trump administration to move forward on policy goals and hearings on Capitol Hill, Brexit negotiations, and North Korea is still an area of concern."

ETFs and ETPs listed in Japan gathered net inflows of $2.19 Bn in June. Year to date, net inflows stand at a record level of $28.56 Bn which is significantly ahead of the $16.50 Bn at this point last year.

Fixed income ETFs and ETPs experienced net outflows of $1 Mn in June, reducing year to date net inflows to $28 Mn, which is less than the same period last year which saw net inflows of $41 Mn.

Nomura AM gathered the largest net ETF/ETP inflows in June with $2.03 Bn, followed by Nikko AM with $1.01 Bn and Daiwa with $245 Mn net inflows.

Deborah Fuhr
119 Followers
Deborah Fuhr is the managing partner and co-founder of ETFGI, an independent research and consultancy firm launched in 2012 in London offers a number of subscription services.Previously, she served as global head of ETF research and implementation strategy and as a managing director at BlackRock/Barclays Global Investors from 2008 – 2011. Fuhr also worked as a managing director and head of the investment strategy team at Morgan Stanley in London from 1997 – 2008, and as an associate at Greenwich Associates. Deborah Fuhr was named Recipient of 100 Women in Finance’s 2017 European Industry Leadership Award. Ms Fuhr was the recipient of the 2014 William F. Sharpe Lifetime Achievement Award for outstanding and lasting contributions to the field of index investing, the Nate Most Greatest Contributor to the ETF industry award at the 11th annual ExchangeTradedFunds.com awards dinner in 2015, the ETF.com Lifetime achievement award in 2015. She has been named as one of the “100 Most Influential Women in Finance” by Financial News over several years, most recently in 2016, and as one of the “10 to Watch in 2014” by Rep. magazine and wealthmanagement.com. Ms Fuhr won the award for the Greatest Overall Contribution to the development of the Global ETF industry in the ExchangeTradedFunds.com survey in 2011 and 2008 and received an award for her contribution to the ETF sector at the annual closed end funds and ETF event in New York and was featured in the Investors Chronicle’s list of “150 people that can make you money” in 2010. Ms Fuhr frequently writes articles for various publications including: Financial News, ETFI Asia, CityWire, FT Advisor, Pensions and Investments, IPE: Investments and Pensions Europe, Focus -World Federation of Exchanges and the Financial Times. Ms Fuhr is one of the founders and on the board of Women in ETFs, one of the founders and on the board of Women in ETFs EMEA chapter, is on the board of Cancer Research UK’s ‘Women of Influence’ initiative to support female scientists. Ms. Fuhr is on the editorial board of the Journal of Indexes (United States), Journal of Indexes (Europe), and Money Management Executive; the advisory board for the Journal of Index Investing; and the investment panel of experts for Portfolio Adviser, the FTSE ICB Advisory Committee, the International Advisory Committee for the Egyptian Exchange, and the University of Connecticut School of Business International Advisory Board. She holds a BS degree from the University of Connecticut and an MBA from the Kellogg School of Management at Northwestern University.
Follow