My reading of the economic and financial tea leaves is that the economy continues to grow at a sub-par pace (about 2%), just as it has for the past 8 years. I don't see evidence of a coming boom, nor of an imminent bust. I think the market expects roughly the same thing; it's not priced to either a boom or a bust, just more of the same. Dull.

Here are a baker's dozen charts, with the latest updates, to flesh out the story: 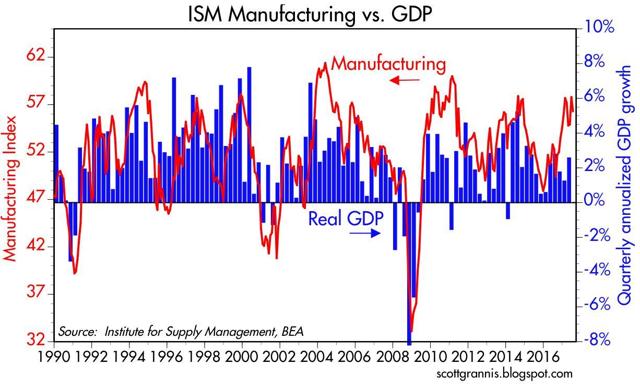 The chart above is one of my enduring favorites. It shows that the ISM manufacturing index does a pretty good job of tracking the growth rate of the economy. What's especially nice is that the index comes out with a relatively short lag of just a week or two, whereas we usually have to wait months to get a read on the economy. What it's saying now is that GDP growth in the current (third) quarter is likely to be in the range of 2-4% annualized. That won't necessarily mean that the underlying pace of growth is picking up, though; it's more likely that some faster reported growth in the current quarter which will make up for the relatively weak growth of recent quarters. Such is the volatile nature of GDP stats. 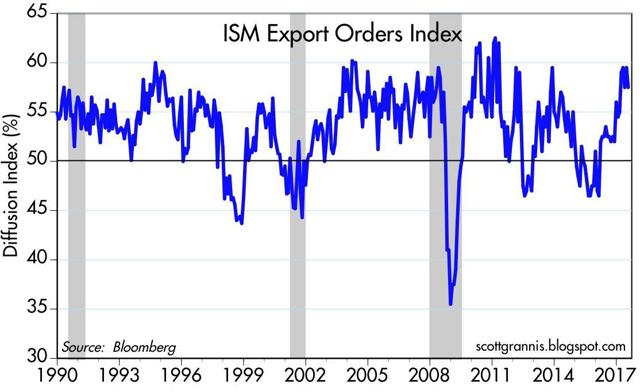 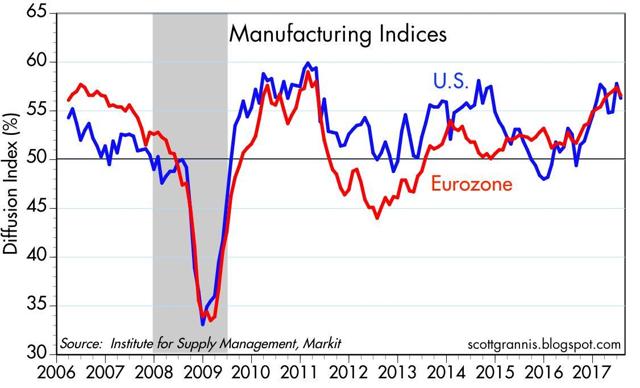 The two charts above are encouraging since they show that global economic activity is likely picking up. US manufacturers are seeing relatively strong overseas demand, and Eurozone manufacturers have experienced a significant improvement over the past year or so, after years of weak activity. 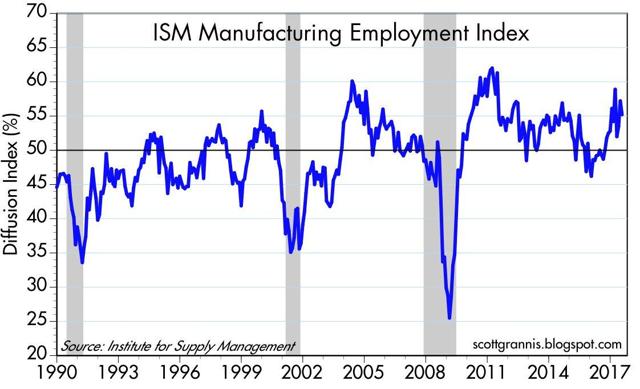 The chart above shows that US manufacturers are at least somewhat optimistic about the future of their businesses, since many reportedly plan to increase hiring activity in the months to come. 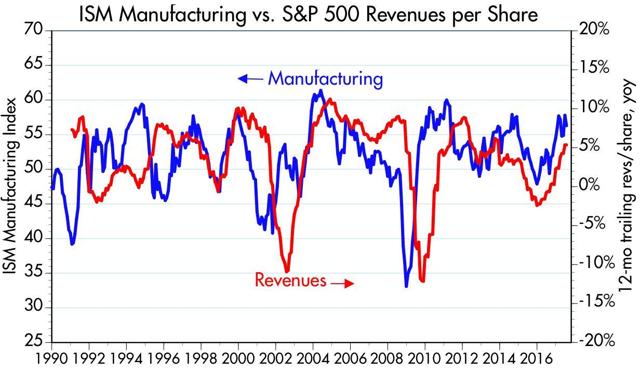 The chart above shows that the ISM manufacturing index does a pretty good job of predicting corporate revenues. For months now, the ISM index has been telling us that revenues per share for the S&P 500 were likely to increase, and they have indeed increased by over 5% in the 12 months ended July. 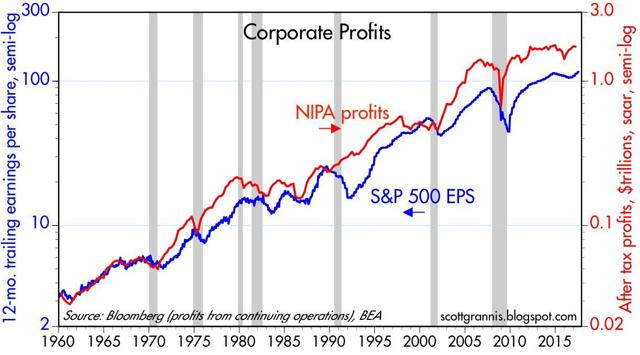 Not surprisingly, faster growth of revenues has gone hand in hand with increased profits. Trailing 12-month earnings per share (earnings on continuing operations) were up over 9% in the year ending July. No wonder the stock market continues to edge higher. Profits and prices are both at all-time highs and rising. 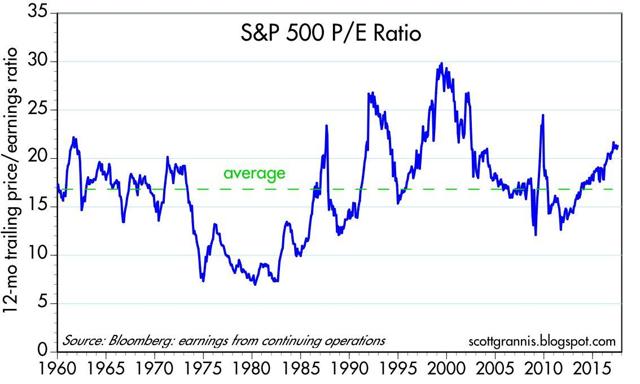 The current trailing P/E ratio of the S&P 500 is just over 21, according to Bloomberg's calculation of earnings from continuing operations. That's a good deal above its long-term average of just under 17, but it's not impossibly high. The inverse of the P/E ratio - the earnings yield on stocks - is still a healthy 4.7%. 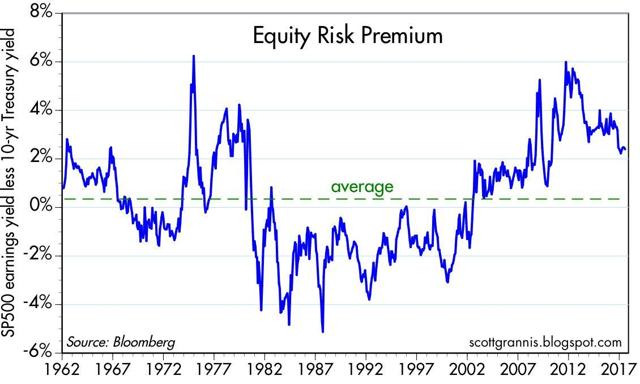 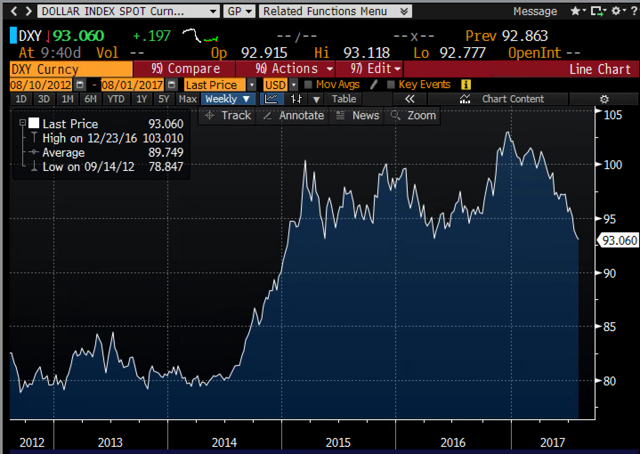 Not all is rosy, however. As the chart above shows, the dollar has taken quite a hit since the "Trump bump" of last November. It's down about 10% in the past 8 months, in what is surely a sign that the world has become a lot less excited about the growth prospects of the US economy. 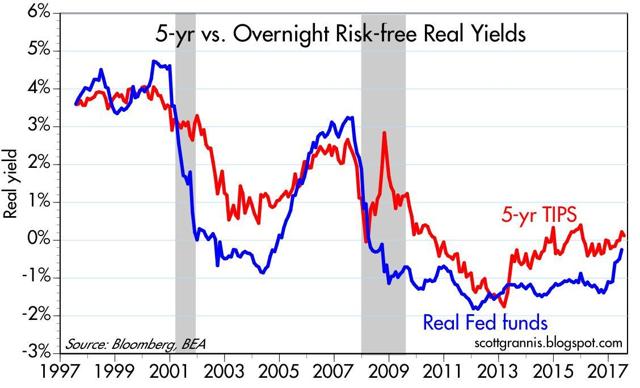 The chart above provides more evidence that the market doesn't expect the US economy to be very strong going forward. The current real Fed Funds rate - the best indicator of whether monetary policy is tight or not - is about -0.25%. The current 5-yr real yield on TIPS (a good indicator of what the market expects the real Funds rate to average over the next 5 years) is only 0.11%. This means the market doesn't expect the Fed to do much more in the way of tightening for the foreseeable future. And that, in turn, means the market holds out very little hope for any meaningful improvement in the US economy. 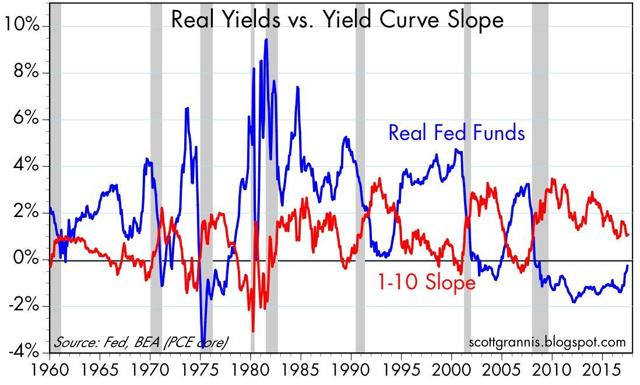 The chart above suggests there is very little reason to expect a recession for the foreseeable future. Every recession for the past half century has been preceded by a monetary tightening sufficient to raise real short-term rates to at least 3-4%, and to flatten or invert the Treasury yield curve. We're a long way away from either of those conditions today. The Fed is relatively easy and is not expected to tighten much, if at all, because the economy is not expected to improve much, if at all. 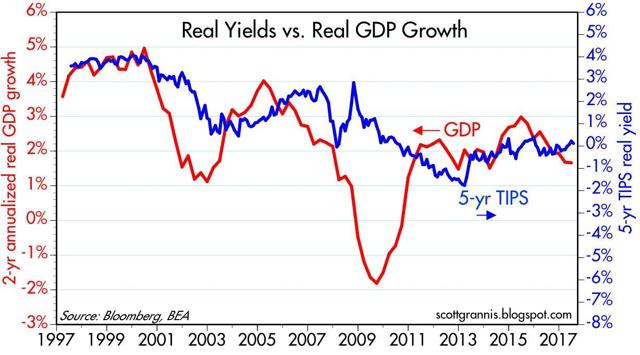 The chart above compares the 2-yr annualized growth of real GDP to the 5-yr real yield on TIPS. I use a 2-yr measure for GDP to "edit out" the quarterly fluctuations which are more due to statistical vagaries than to any real change in the economy's strength. The chart suggests that the current level of real yields is a sign that the market thinks the economy is still likely on a 2% growth trend. (The latest revision to GDP boosted growth during the 2014 -2015 period, but reduced it in the past two years. That is consistent with my repeated observations that the trend growth rate of jobs has slipped in the past year or so from 2.0% to 1.6-1.7%.)

Another not-so-rosy-sign is construction spending, which has softened and dipped year to date. This could just be a pause that refreshes, but in a worst case scenario - if this weakness continues - it could be an early warning sign of another recession. I doubt that is the case since mortgage originations and home sales are still relatively healthy, but if you want something to worry about, here it is. 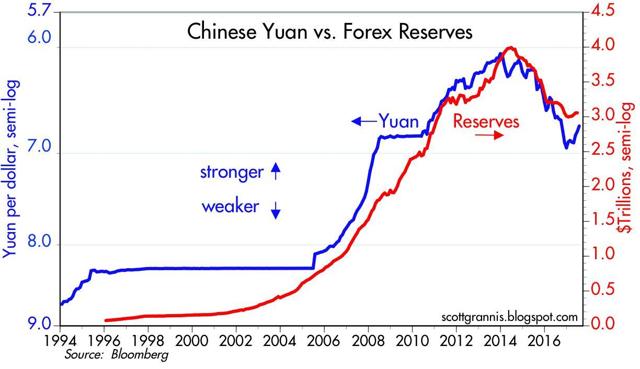 I highlighted this chart a few weeks ago, noting that the stability of China's foreign reserves this year is a healthy sign that the yuan has moved to a level that is balancing capital flows (forex reserves under a floating-pegged currency regime such as China's are a direct measure of net capital flows). The yuan has appreciated a bit more of late, a sign that the situation in China is improving on the margin (more money wants to get in than out). Good news from overseas is always good news for the US, especially for a major player like China.
To sum up: I see no sign of excessive optimism or pessimism in market prices. The market's expectations are for a dull economy to remain dull and for inflation to remain relatively low. 5-year expected inflation, according to TIPS and Treasury prices are 1.7%. There is no compelling reason to worry about a recession or to get excited about a boom. The market is thus "vulnerable" to signs of emerging weakness or increased strength. If we get a decent tax reform package, look for optimism to emerge. If we don't get tax reform, the downside risk is likely not significant since reform expectations have not been priced in. Fortunately, we have had some meaningful reform in the area of regulatory burdens so far this year, and this should give the economy enough of a lift to keep things on an even, 2% growth trajectory or maybe slightly better.

Calafia Beach Pundit
55.37K Followers
Scott Grannis was Chief Economist from 1989 to 2007 at Western Asset Management Company, a Pasadena-based manager of fixed-income funds for institutional investors around the globe. He was a member of Western's Investment Strategy Committee, was responsible for developing the firm's domestic and international outlook, and provided consultation and advice on investment and asset allocation strategies to CFOs, Treasurers, and pension fund managers. He specialized in analysis of Federal Reserve policy and interest rate forecasting, and spearheaded the firm's research into Treasury Inflation Protected Securities (TIPS). Prior to joining Western Asset, he was Senior Economist at the Claremont Economics Institute, an economic forecasting and consulting service headed by John Rutledge, from 1980 to 1986. From 1986 to 1989, he was Principal at Leland O'Brien Rubinstein Associates, a financial services firm that specialized in sophisticated hedging strategies for institutional investors. Visit his blog: Calafia Beach Pundit (http://scottgrannis.blogspot.com/)
Follow
6 Comments
To ensure this doesn’t happen in the future, please enable Javascript and cookies in your browser.
Is this happening to you frequently? Please report it on our feedback forum.
If you have an ad-blocker enabled you may be blocked from proceeding. Please disable your ad-blocker and refresh.