High yield is not responding to the fall in oil prices like it's 2016. Russ talks about why the pain point is lower today than 18 months ago.

Investors, myself included, continue to marvel at the low volatility regime. Measures of equity and bond volatility remain at or near all-time lows. As I've discussed in previous blogs, tight spreads and benign credit conditions support a low volatility environment, as illustrated below. 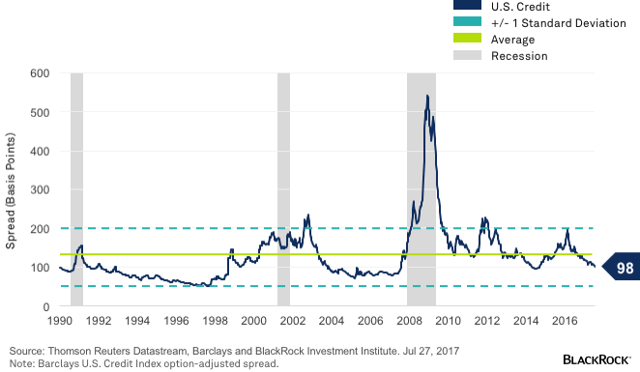 Year-to-date, high yield and other spread products continue to produce solid returns. In the case of U.S. high yield, this is a bit surprising given the drop in oil prices, down around 10% year-to-date. After all, it was only 18 months ago that a plunge in oil prices, coupled with fears over Chinese growth, sent high yield plunging and credit spreads soaring. What has changed?

As it turns out, quite a lot. There are a number of reasons why high yield markets have been more resilient to lower oil prices:

Unlike early 2016, when investors fretted over the potential of China dragging down the global economy, most recent economic indicators point to stability.

High yield energy is now 13% of the Bloomberg Barclays High Yield Index as opposed to 17% in early 2016. That is roughly a 25% drop in its contribution to high yield spreads.

Energy issuers are less dependent on rolling over near-term debt. And as with all high yield issuers, companies continue to benefit from still low interest rates and easy financial conditions.

According to research from Barclays, high yield oil and gas exploration and production (E&P) companies have slashed breakevens costs by approximately 30%, to roughly $50 per barrel. This is particularly true for those E&P firms centered in the Permian Basin in West Texas, where production costs tend to be the lowest in the continental United States.

All of this suggests that high yield is not as vulnerable to lower oil prices as it was in early 2016. Work from my colleague Miguel Crivelli confirms this view. Based on his research, when West Texas Intermediate (WTI) is between $40 to $50, high yield spreads are likely to be about 45% lower than what would have been expected based on the pre-2017 relationship. Put simply, high yield energy spreads are less sensitive to changes in oil today. For every dollar increase in oil prices, high yield spread in energy only moves two-thirds as much as it would have before 2017, when oil prices were in the same range.

That said, the fact that high yield has become more resilient does not mean the sector is now agnostic to the price of oil. At some price point, a good portion of energy issuers will find themselves struggling to service their debt. A best guess: Oil at $35 per barrel could entail not only a significant widening of spreads for energy issuers but potential contagion to the rest of the asset class.

This is important. One factor that has kept markets aloft year-to-date has been well behaved credit markets. As experienced in early 2016, credit contagion could derail equities as well. The good news today is that the pain point, i.e. when high yield succumbs to lower oil, is a good deal lower than it was. This provides some cushion for both credit and equity markets.

Russ Koesterich, CFA
3.41K Followers
Russ Koesterich, CFA, JD, Managing Director and portfolio manager for BlackRock’s Global Allocation Fund, is a member of the Global Allocation team within BlackRock's Multi-Asset Strategies Group. He serves as a member of BlackRock's Americas Executive Committee. Mr. Koesterich's service with the firm dates back to 2005, including his years with Barclays Global Investors (BGI), which merged with BlackRock in 2009. He joined the BlackRock Global Allocation team in 2016 as Head of Asset Allocation and was named a portfolio manager of the Fund in 2017. Previously, he was BlackRock's Global Chief Investment Strategist and Chairman of the Investment Committee for the Model Portfolio Solutions business, and formerly served as the Global Head of Investment Strategy for scientific active equities and as senior portfolio manager in the US Market Neutral Group. Prior to joining BGI, Mr. Koesterich was the Chief North American Strategist at State Street Bank and Trust. He began his investment career at Instinet Research Partners where he occupied several positions in research, including Director of Investment Strategy for both U.S. and European research, and Equity Analyst. He is a frequent contributor to financials news media and the author of two books, including his most recent "The Ten Trillion Dollar Gamble."Mr. Koesterich earned a BA in history from Brandeis University, a JD from Boston College and an MBA from Columbia University. He is a CFA Charterholder.
Follow
6 Comments
To ensure this doesn’t happen in the future, please enable Javascript and cookies in your browser.
Is this happening to you frequently? Please report it on our feedback forum.
If you have an ad-blocker enabled you may be blocked from proceeding. Please disable your ad-blocker and refresh.