The recent economic data coupled with what we are hearing this earnings season paint a picture of consumer finances getting seriously stretched.

Yesterday, we learned that personal income growth stalled out in June, unchanged from May. The 3-month moving average shows slowing in income growth. 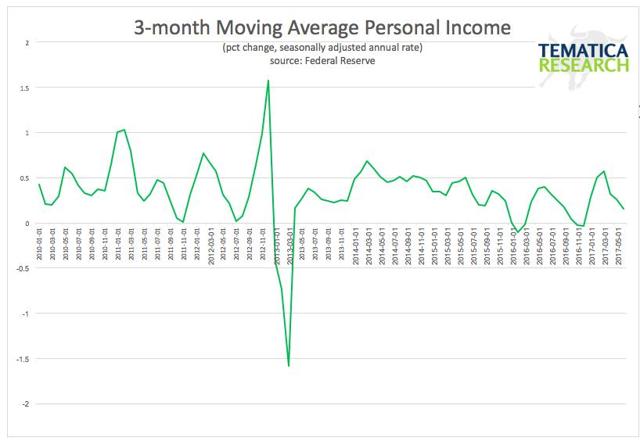 With the decline in income, we have also seen consumers spending less, although still at relatively strong levels, stronger than income growth would suggest. 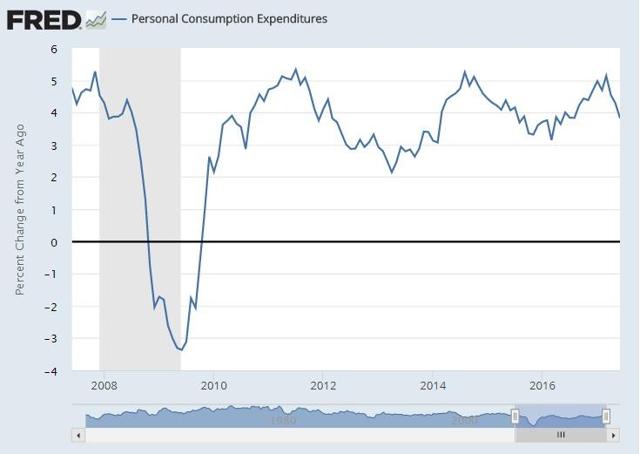 Without incremental income to support spending, consumers have reduced their savings rate well below historical norms. 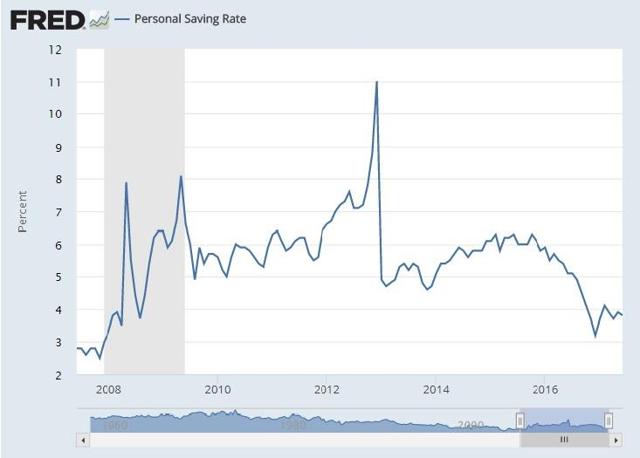 But the story doesn’t end here. While the mainstream financial media keeps telling us how great the consumer is doing, ignore the prior charts (cough, cough), we are seeing loan loss provisions on the rise. The average charge-off rate for large U.S. card issuers increased to 3.3 percent in the second quarter, the highest level in four years and the fifth consecutive quarter of year-over-year increases. All nine of the largest issuers: JPMorgan Chase (JPM), Citigroup (C), Capital One Financial (COF), Discover (DFS), U.S. Bank (USB), Wells Fargo (WFC), Bank of America (BAC), Synchrony Financial (SYF) and American Express (AXP) experienced increases for the quarter.

Capital One Financial beat expectations for both revenue and earnings but increased its charge off rate to 5.11 percent from 4.07 percent in the same quarter last year. The company elected to not provide guidance for anticipated defaults for the coming year.

Synchrony Financial, the largest store credit card issuers in the U.S., reported second-quarter earnings that beat Wall Street estimates largely due to consumers taking on more debt. Despite a strong showing last quarter, loan losses continued to worsen and were a big topic during the earnings call. The company’s net charge-off rate rose to 5.42 percent from 4.51 percent the prior year. Provision for loan losses in the second quarter rose 30 percent over the prior year.

Bottom Line: Spending can only grow by earning more or borrowing more. With the savings rate in decline and default rates on the rise while income growth continues to weaken, we are seeing additional evidence that we are in the later stages of the business cycle.

Tematica Research
1.07K Followers
We see Investment themes at work and at play every day in the economy — oftentimes across industries and categories — and other aspects of day to day life. It is the opposite of the typical Wall Street approach to research, which oftentimes overly focuses on a single industry at a time and results in missed opportunities. These themes are identified by looking at the intersection of shifting economics, demographics, psychographics, technologies, mixed in with regulatory mandates and other forces. In other words, looking at the real world that companies are operating in! Some businesses will adapt, while others will leap frog ahead riding these thematic tailwinds to profits and significant share price movements, and sadly there will be those left floundering too. For every Apple, there is a Palm and Blackberry. For every Facebook . . . a MySpace or Friendster. For every Netflix, there’s a Blockbuster. The list goes on and on, even in non-technology categories. By examining these thematic tailwinds, our goal is to identify mispriced securities relative to the business opportunities ahead and avoid those that are overly valued and or staring down the barrel of significant headwinds
Follow
1 Comment