The July employment report came in on the high side of expectations and sufficiently strong to keep the Fed's policy plans for this year and next intact despite low inflation. On average central bankers will have a hard time backing down from rate hike plans with job growth still in excess of that necessary to hold unemployment stable. They may believe the economy is not yet at full employment, but they don't want to be too far below their estimate of the neutral interest rate before they hit full employment. And they don't think that point can be very far off. 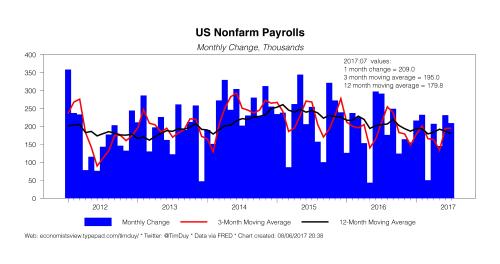 The pace of job growth is easing, but only gradually. The 12-month average was 180k, compared to 205k in July of last year. The unemployment rate edged down to 4.3%, back to the level of June. The labor force participation rate rose, but remains in the range it has enjoyed since 2016: 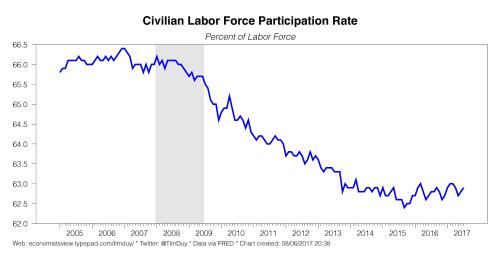 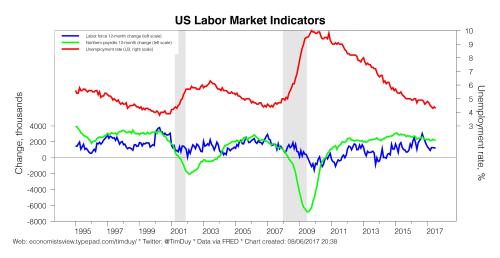 The big labor force gains occurred at the beginning of 2016, which helped stabilize the unemployment rate. The current dynamic will almost certainly push unemployment lower and past the Fed's comfort levels, probably sooner than later.

The Fed will see hopeful signs in the wage numbers. Average wages grew at a 4.19% annualized rate in July, giving credence to the theory that the slowdown in wage growth earlier this year was temporary: 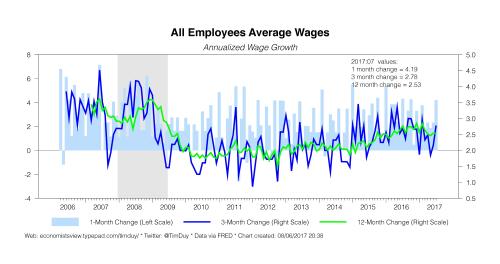 To be sure though, one month does not a trend make. But the Fed will not be making a decision on one month of data. Balance sheet normalization will almost certainly begin in September (barring a disruptive debt ceiling battle), leaving December for a potential rate hike. If wage data continues to come in closer to July's number than June's, the Fed will feel more confident that they a.) have the correct estimate of the natural rate of unemployment and b.) that inflation will return to their 2% target over the medium run. Hence, the December rate hike remains in play.

Solid job growth seems likely to continue. That at least is the story told by temporary help payrolls: 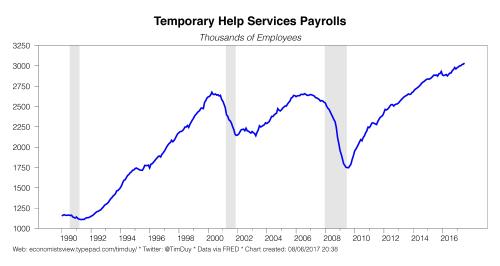 Bottom Line: A solid report that suggests further declines in the unemployment rate in the months ahead. The Fed will want to stay preemptive in this environment. I don't foresee them backing off their rate forecast for this year and next very easily.

Tim Duy
553 Followers
Tim Duy is the Director of Undergraduate Studies of the Department of Economics at the University of Oregon and the Director of the Oregon Economic Forum. Visit Tim Duy's Fed Watch (http://economistsview.typepad.com/timduy/)
Follow
To ensure this doesn’t happen in the future, please enable Javascript and cookies in your browser.
Is this happening to you frequently? Please report it on our feedback forum.
If you have an ad-blocker enabled you may be blocked from proceeding. Please disable your ad-blocker and refresh.