About once a year (usually August), I get to visit the motherland (Bulgaria) and work there for a couple of weeks before cutting all cords (save for an iPhone) and heading for the mountains and/or the beach for two weeks. While some might find it elitist to work remotely 5,000 miles away from America, coming to the land of my birth is a resetting experience that puts the passing parade of world events in perspective.

Last Friday, we had another decent employment report for the month of July, so U.S. bonds sold off, stocks experienced a violent rotation, and the dollar finally surged. While it is difficult to see the latest surge on a five-year chart, the action on Friday came right "on support" near 93, as traders like to say.

It is worthwhile pointing out that support and resistance are never precise numbers. Is there support at 92 or 93 for the U.S. Dollar Index? That's hard to say. It is between the two numbers. The low last week was 92.43, while we closed on Friday at 93.43. I think we are headed up, way past 100, a number that could be conquered quite rapidly if what looks to be a military option against North Korea materializes soon.

As a reminder, the U.S. government banned all travel to North Korea and recalled all U.S. citizens a couple of weeks ago. If this is not a preparation for a military strike, then I don't know what is. To boot, that bloke Kim Jong Un staged another ICBM test after the travel ban was issued. If there was a case where the North Koreans were practically begging for an intervention, this would be it. If a North Korean war leads to the deposition of Kim, I expect the U.S. Dollar Index to make a new multi-year high past the 103 high in 2016. Naturally, it is hard to call the exact date of such an event, but suffice to say that if the North Korean escalation happens this quarter, I would expect a dollar surge to happen by year's end. 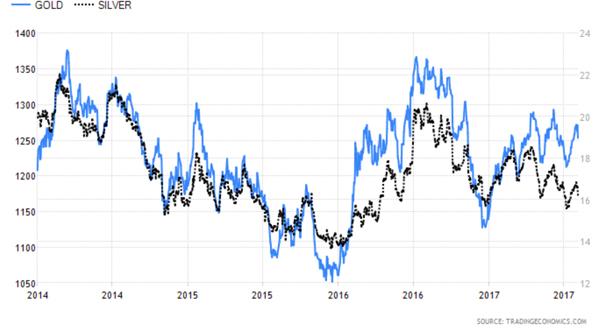 This raises interesting questions about the price of precious metals, which tend to move inversely to the U.S. Dollar Index. The silver market is very weak having recently experienced a "dead-cat bounce" that is in the process of rolling over again. The silver market is clearly locked in a bearish pattern of lower lows and lower highs that suggests much lower prices for gold bullion in the weeks ahead, since silver tends to lead gold. So far, silver is suggesting that gold is headed much lower.

I would say that if my $1,000 bet with Gary Alexander (that gold will drop below $1,000/oz. between now and year end) were to work out, we would have to have both a North Korean bombardment/invasion (which looks likely in 2017) and a Chinese yuan devaluation (which is less likely in 2017, but very likely next year). I still state my odds at 50/50, despite gold bullion closing at $1,253 per ounce last Friday.

Commodities Get Back Their Inverse Dollar Correlation

Between January and June 2017, as the U.S. Dollar Index declined so did the CRB Commodity Index. This is not normal as those tend to move inversely to each other from a historical perspective. The reason for this inversion is the largest U.S. Dollar Index component, the euro. This year, pro-EU election victories in The Netherlands and France ended the eurozone disintegration discount that had been plaguing the euro since Brexit. In that regard, it hasn't been so much that the dollar is weak but the euro has been strong. 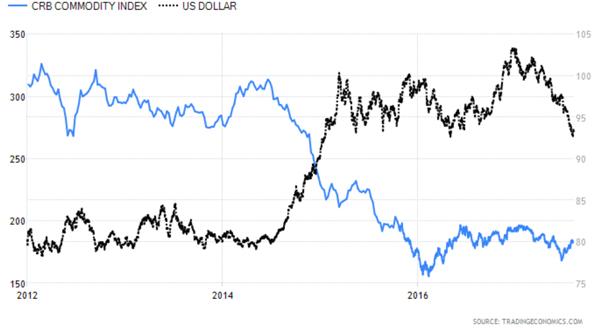 In July, all that changed as the CRB Commodity Index rebounded and the dollar index kept going lower. While a surge in the U.S. Dollar Index last week and a weak performance for commodities has so far been a short-term event, there are reasons to think that the inverse correlation between commodities and the dollar is about to return. Commodities did not rally in the seasonally strong March-September period. If they are that weak when they are supposed to be strong, what will happen in the fall and winter months?

Also, the largest U.S. Dollar Index component (the euro, representing 57% of the Dollar Index) has moved from under $1.04 to over $1.18 and has simply run too far too fast. Europe's common currency went from undervalued to fairly valued in a very short period of time. While currencies typically don't stop rallying at fair value, if we have an escalation of hostilities in North Korea the euro should come under pressure.

In addition, the German federal election in September is already discounted as a win for Angela Merkel due to the way several local elections have gone so far in 2017. In other words, there are no more pro-EU election victories to look forward to, while we still have some difficult Brexit negotiations to consider.

Ivan Martchev
1.25K Followers
Ivan Martchev is an investment strategist with Navellier Private Client Group. Previously, Ivan served as editorial director at InvestorPlace Media. Ivan was editor of Louis Rukeyser's Mutual Funds Newsletter and associate editor of Personal Finance Newsletter. Ivan is also co-author of The Silk Road to Riches (Financial Times Press). The book provided analysis of geopolitical issues and investment strategy in natural resources and emerging markets with an emphasis on Asia. The book also correctly predicted the collapse in the U.S. real estate market, the rise of precious metals, and the resulting increased investor interest in emerging markets. Ivan’s commentaries have been published by MSNBC, The Motley Fool and others. Currently Ivan is a weekly editor of Navellier’s Market Mail and a contributor to Marketwatch.
Follow