At the recent July 2017 FOMC meeting, the Federal Reserve left the benchmark Federal Funds Rate Unchanged at a range from 1% to 1.25%. The more notable policy discussion was around the Fed’s large $4.5 Trillion Balance Sheet. The $4.5 Trillion balance sheet is comprised of about 55.1% of Treasurys, 39.5% Mortgage Backed Securities, with the remainder being other fixed income securities.

The Federal Reserve remarked that as of the July 2017 meeting, they anticipated unwinding their balance sheet “relatively soon”. Some commentators interpret the date for initiation to be as early as the September meeting, while others think it won’t happen until the December meeting. Initiating significant policy decisions at a December meeting has precedent, since December 2013 initiated the famous Taper of the QE program, and December 2015 also was the first rate hike in this tightening cycle following the financial crisis.

Since it seems relatively certain that the Fed will begin the Unwind later in 2017, the main point of discussion should shift from not “when” the dramatic shift in monetary policy will begin, but the results of the shift in the program.

Some analysts point out that the Federal Reserve Selling off its outsized holdings of Treasurys and MBS will result in lower prices, and therefore higher interest rates. This appears logical, since new selling pressure should in theory lower the price of these securities. The expected increase in interest rates on these longer term securities would coincide with increases in short-term fed funds rates, since the market still expects about a 49% chance of an additional 25 basis point rate hike within the next 6 months. Furthermore, many analysts suggest that the reversal of QE is also bearish for stocks, since the lower interest rates served to elevate the valuations of stocks.

The notion that the Unwind of QE would increase interest rate certainly would be problematic for stocks, since stocks compete for investor capital with fixed income securities like bonds.

Before the start of the original QE programs, many analysts said that these programs, which resulted in the Fed buying fixed income securities, would boost their prices, and therefore lead to lower interest rates. However, this thesis proved to be incorrect, since during each of the three QE programs, the benchmark 10 year note yield rose substantially.

Therefore, if the QE programs resulted in higher interest rates, then we can logically expect that the reversal of QE will result in lower rates. However, this contradicts what many analysts expect for the Fed’s Balance Sheet Unwind. 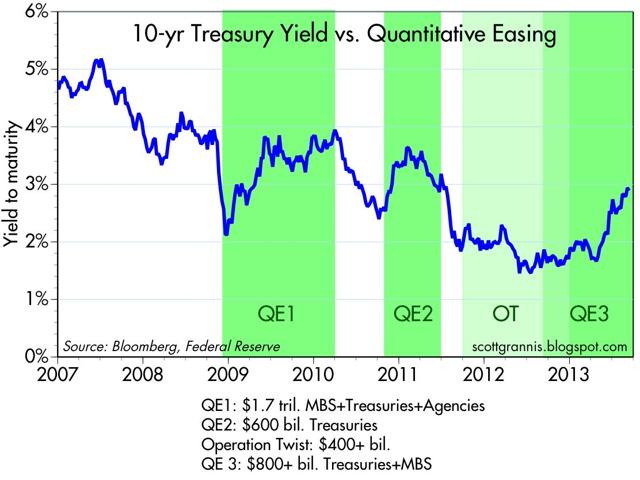 How Could Selling Bonds Result In Lower Rates

Taking a cue from history, we would expect interest rates to fall from the QE reversal. The thesis behind the fall in interest rates during the reversal of QE is the reverse of the thesis of why interest rates rose during QE. QE served to boost the “risk-on” trade as it was inflationary, since the Fed was injecting new money and liquidity into the banking system. As a result of this move to increase risk-appetite, safe treasury and MBS fixed income securities lost their appeal as expectations for inflation and bullish economic outcomes increased.

However, as soon as each QE program ended, the inflationary pressure was removed, so as a result interest rates fell back down, and search for safety led to a drop in interest rates as safe Treasurys were bought by the market.

The graph below shows the movement in 30 year Treasury yields compared to the Fed’s Treasury holdings. As we can see, when QE 3 was known to be in play, beginning in September 2012, the bond market sold off long term Treasurys resulting in higher rates as the 30 year Treasury yield rose from under 3.0% in September 2012, to nearly 4.0% just a year later. However, as QE began to slow, due to the Taper in December 2013 and purchases declining each month, the inflationary pressures were removed; the risk-off returned, resulting in more money flowing into Treasurys and yields plunging. As the Taper was announced in December 2014, the 30 year Treasury yield peaked at nearly 4.0% and subsequently plunged to under 2.5% by January 2015, when the QE program was officially halted.

Therefore, many market participants were wrong about QE when they expected the asset purchases to increase Treasury prices and lower the yields. However, many analysts were correct about the bullish nature of QE, since the S&P 500 did seem to perform well during QE programs.

What to Expect During This Balance Sheet Unwind

Going forward, actual history may be more reliable than predictions. Therefore, rather than listen to predictions saying that the reversal of QE will lead to higher interest rates, it may be more prudent to look at actual history of what happened during QE, and then expect the opposite. Therefore, one can expect lower interest rates, since history proved that the original QE programs resulted in higher rates.

Additionally, as shown above, the S&P 500 performed well during QE programs, since the three major corrections since 2010 have occurred during mid-2010, after QE 1 ended, then mid-2011, after QE 2 ended, and then in mid-2015 to early 2016, which was right after the QE 3 officially ended as the Taper concluded. Since QE served to be bullish for the S&P 500, we can expect the QE unwind to present major headwinds for the S&P 500. Looking back to 2007 through mid 2008, we can see the Fed also reduced its treasury holdings on the balance sheet, and the S&P 500 did indeed plummet over 35% in 2008.

The prospect of the Federal Reserve unwinding its large balance sheet is nearing as the Fed officials themselves indicated it would start in 2017. Many analysts were wrong in saying the original QE programs would lead to lower rates, and therefore, it appears irrational to expect the reversal of the program to lead to higher rates. Rather than follow a logic that has been proven incorrect, it may be better to take a cue from history—since the QE programs historically led to higher Treasury rates, we may reasonably expect the QE unwind to put downward pressure on Interest Rates.

However, those analysts concerned about the bearish nature of QE unwind for stocks may be onto something. History has told us that QE was very bullish for stocks, and the recent major corrections did occur shortly after QE programs ended. Since the original QE programs were bullish, investors should reasonably expect major headwinds for stocks should the Fed’s balance sheet reduction be actually implemented.

If the QE reversal does put downward pressure on long-term interest rates, while at the same time the Fed continues to edge up the short-term fed funds rate slowly, then it would lead to a continued flattening of the yield curve. The prospect of a flattening yield curve should scare investors, since yield curve flattening could potentially lead to an inversion, which history has shown, is perhaps one of the more ominous market signals for the US Stock market and economy.

Additional Disclosure: The information contained in this article is an opinion and constitutes neither actionable investment advice nor a recommendation to trade any security.

Sovereign Investment Insight
595 Followers
I am primarily an equities investor whose foremost objective is growing income for retirement. My investment strategy concentrates on maximizing returns while minimizing risk. The Core component of the strategy is accumulating US Stocks. I also utilize options to enhance income and manage risk.I started investing in the stock market at the age of 15 in 2005. All my articles and comments are strictly my opinion and therefore do not constitute investment advice, and they do not constitute a recommendation to buy or sell any security.
Follow